Top Posts
Colorado football coach Sanders’ unabashed faith
There’s A Light That Enters Houses With No...
Knowing the One Who Always Keeps His Word
Pregnancy Resource Centers Fight For Life Amidst Opposition
This World is Not Our Home
Lessons Learned From a Gingerbread House
Let There Be Peace on Earth
‘I Wanna Dance’ movie: Whitney Houston’s success and...
Fact Finding, Sight Seeing, and Prayer Walking
Kidney donation led to 8 life-saving surgeries
Home Tags Posts tagged with "Johnny Cash"

ALBUQUERQUE, NEW MEXICO (ANS)–He appeared short.  But appearances can be deceiving.  His thick eyebrows, distinct Southwestern clothes, walking stick, and kind words made a deep impression on me.  The year was 2009. Anaya sat in a chair the whole time, talking causally to the audience. My wife, Melanie, and I were at a local bookstore to hear him speak about writing.  This was my first—of a few—encounters with Rodolfo Anaya, a man called the “father of Chicano literature” by fellow New Mexican author Tony Hillerman. 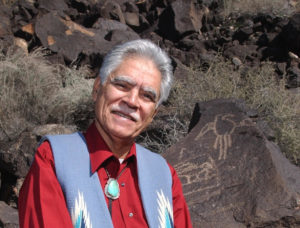 New Mexico author Rudolfo Anaya (CQ) among the petroglyphs on the escarpment of Albuquerque’s west mesa in March of 2005. DEAN HANSON/JOURNAL dhanson@abqjournal.com 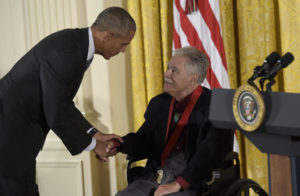 In 2001, Anaya received the National Medal of Arts Award, the highest honor given to artists and arts patrons by the U.S. government, the same year as Johnny Cash, Judith Jamison, Kirk Douglas, Helen Frankenthaler, Yo-Yo Ma, Mike Nicholson, and the Alvin Ailey Dance Foundation. Interestingly, Anaya was a Johnny Cash fan, writing, “Literature and art and music are what help people look into the soul of the other community. I like western music and Johnny Cash.”[1]

Anaya was awarded the National Humanities Medal by President Barak Obama in 2016. The award was for Anaya’s “pioneering stories of the American Southwest…His works of fiction and poetry celebrate the Chicano experience and reveal universal truths about the human condition,” Mr. Obama said. “And as an educator, he has spread a love of literature to new generations.”[2] 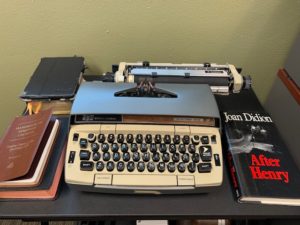 At the bookstore, Melanie and I sat by the lit fireplace next to his wife, Patricia.  I teased her about having to attend so many writing events.  She replied, “Rudy loves to talk about writing.” Anaya’s humor, humility, and insight were greatly appreciated by those gathered to hear him.

In honor of his life and writing, here’s the three points he gave to all budding writers:

All marvelous advice. But just as insightful to me was his recommendation to read a poet he considers one of the finest in New Mexico: Keith Wilson.  I now treasure both Anaya and Wilson. 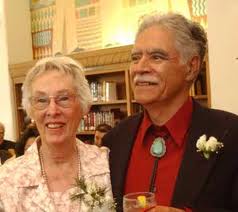 The New York Times reports, “Mr. Anaya, a longtime childhood literacy advocate, and his wife, Patricia, who died in 2010, used proceeds from his book sales to establish a scholarship fund for underprivileged youth in New Mexico. They also frequently lent their guesthouse in the Jemez Mountains of New Mexico to writers in need of a quiet place to work.”[3]

Anaya passed away on Sunday, June 28th from a long illness.