Top Posts
Colorado football coach Sanders’ unabashed faith
There’s A Light That Enters Houses With No...
Knowing the One Who Always Keeps His Word
Pregnancy Resource Centers Fight For Life Amidst Opposition
This World is Not Our Home
Lessons Learned From a Gingerbread House
Let There Be Peace on Earth
‘I Wanna Dance’ movie: Whitney Houston’s success and...
Fact Finding, Sight Seeing, and Prayer Walking
Kidney donation led to 8 life-saving surgeries
Home Tags Posts tagged with "Kristyn Getty"

MILTON KEYNES, UNITED KINGDOM (ANS) — Kristyn Getty, the celebrated hymn writer and worship leader, will feature this Easter as The Interpreter in the 2019 remake of the classic John Bunyan title, The Pilgrim’s Progress.

Produced by Revelation Media and Cat in the Mill Studios, The Pilgrim’s Progress will be released to U.S. cinemas Easter 2019 and also features Lord of the Rings star, John Rhys-Davies. The film will be shown on April 18 and April 20, distributed through Fathom Events.

In recent years, according to a media release, faith-based films have proven to be one of the most effective tools for sharing the essential truths of Christianity worldwide. Classic stories that stand the test of time have the unique power to break down barriers of age, race, nationality, and language.

Speaking on the eve of the release, Getty said, “It was an absolute honor to be asked to be a part of the cast of this important movie. The Pilgrim’s Progress is one of the all-time classic Christian books and has had a profound impact. Our hope for this movie is that those same truths would be released afresh to a new generation of children across the country.” 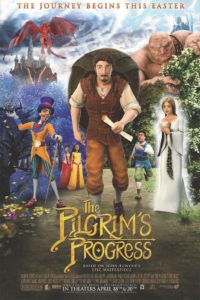 Movie poster for The Pilgrim’s Progress

The Pilgrim’s Progress has been translated into over 200 languages, has never been out of print and has sold over 200 million copies — more copies than any Christian book, next to the Bible. Written in 1678 by John Bunyan while in prison for holding religious services, The Pilgrim’s Progress is often cited as the greatest allegory ever written.

The 2019 film will be the story’s feature-length theatrical debut, as well as the first computer-animated telling of the timeless tale. Media-driven families can be assured that this centuries-old story can still connect with viewers of all ages.

“More than any other story (outside the Bible), THE PILGRIM’S PROGRESS has been used to inspire and challenge Christians to set their eyes on God, all around the world,” explained Executive Producer Steve Cleary.

“We are thrilled to offer this tale to a new generation through CGI animation, and are confident that the timeless themes of faith – such as hope, persecution, persistence, doubt, hardships – will resonate in a whole new way.”

Revelation Media is unique in its commitment to creating projects that can first and foremost serve as an asset to missionaries around the globe. Several early scenes from the project were paid for specifically through the film’s Kickstarter campaign, where over 1,600 backers gave nearly $150,000 for the completion of the project. This crowdfunding, as well as the support of generous ministry partners including American Family Association, allows Revelation Media to fund the distribution of the film to those working on the mission field.

Keith and Kristyn Getty occupy a unique space in the world of music today as preeminent modern hymn writers. In re-inventing the traditional hymn form, they are creating and cultivating a catalogue of songs teaching Christian doctrine and crossing the genres of traditional, classical, folk and contemporary composition which are sung the world over.