Top Posts
Knowing the One Who Always Keeps His Word
Pregnancy Resource Centers Fight For Life Amidst Opposition
This World is Not Our Home
Lessons Learned From a Gingerbread House
Let There Be Peace on Earth
‘I Wanna Dance’ movie: Whitney Houston’s success and...
Fact Finding, Sight Seeing, and Prayer Walking
Kidney donation led to 8 life-saving surgeries
The Power of Curiosity
When Love Came Down at Christmas
Home Tags Posts tagged with "Laos Christian persecution"

Police burst into a gathering of Christians in Laos, arresting a grandmother and three other believers as they 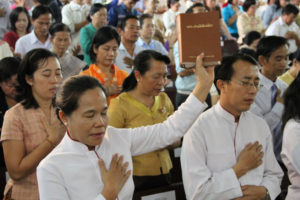 Christians worship at a registered church in Laos

worshipped last month, according to a report by Morning Star News.

Authorities raided the church in Keovilai village, located in Savannakhet Province, on Nov. 18, arresting the 78-year-old grandmother, Bounlam, and three men identified by the surnames Duangtha, Khampan and Ponsawan.

The three men were held in handcuffs and foot stocks. Police also evicted them from their homes and property, according to HRWLRF.

Villagers said they were arrested because of their belief in Jesus Christ and will face unspecified criminal charges. All four have since been released. Bounlam was released first, because she needed treatment for a heart condition.

Area Christians said police have threatened more severe punishment if the Lao Christians do not renounce Christianity, which is considered an enemy of the single-party, Marxist-Leninist country, according to the HRWLRF.

HRWLRF urged the Lao government to punish the three police officers “who acted illegally in arresting the four Christians,” and called for their homes to be restored to them.

The group urged the Lao government to respect the religious rights of the Lao people as guaranteed in the Lao constitution and the U.N. International Covenant on Civil and Political Rights, ratified by Laos in 2009. It upholds the individual’s right to adopt a religion/belief of choice as well as the right to manifest that religion/belief in corporate worship.

“Any form of coercion impairing the freedom to have and manifest one’s religion/belief of choice is condemned in the Covenant,” HRWLRF noted.

The Lao government officially recognizes the religious umbrella groups for Christianity, Buddhism, Islam and the Baha’i, but the only officially recognized Christian denominations are the Catholic Church, the Laos Evangelical Church and the Seventh-day Adventist Church, according to the U.S. State Department’s International Religious Freedom Report of 2017.