Top Posts
There’s A Light That Enters Houses With No...
Knowing the One Who Always Keeps His Word
Pregnancy Resource Centers Fight For Life Amidst Opposition
This World is Not Our Home
Lessons Learned From a Gingerbread House
Let There Be Peace on Earth
‘I Wanna Dance’ movie: Whitney Houston’s success and...
Fact Finding, Sight Seeing, and Prayer Walking
Kidney donation led to 8 life-saving surgeries
The Power of Curiosity
Home Tags Posts tagged with "Law Enforcement Appreciation Dinner"

According to Lizzy Long, writing for the BGEA, Will Graham said: “First and foremost, if there’s something I want you to know, it’s that the Billy Graham Evangelistic Association loves you. … We appreciate what you do. You make our community safe, [and] you look out for us.” 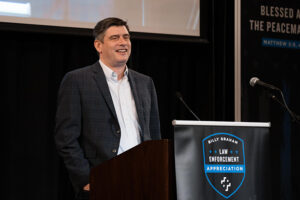 Will Graham shared his support for police officers at a Law Enforcement Appreciation Dinner in Charlotte, North Carolina

Mentioning his father, Franklin Graham, wished he could be there, Will Graham explained how Franklin had been the driving force for this initiative after seeing the heavy toll placed on officers the past year.

On behalf of the BGEA, Long stated The Billy Graham Rapid Response Team hosted the final appreciation dinner Wednesday night. In 2021, the ministry plans to expand these events and others to cities that have faced civil unrest.

As officers entered BGEA headquarters, located just behind the Billy Graham Library, they caught a glimpse of Christmas at the Library, an annual Library event each December. They watched as horse-drawn carriages traveled down lit walkways and past brightly decorated trees.

Officers greeted one another before enjoying worship by musician Dennis Agajanian and the Tommy Coomes Band in the BGEA Dining Hall. They enjoyed prime rib and salmon before selecting red velvet cake or peppermint cheesecake for dessert.

“From the beginning [of the night], it gave me chills,” said Amanda Walters, a Charlotte-Mecklenburg police officer. She sat with her husband Andrew, a Huntersville (N.C.) police officer. Officers from her CMPD motorcycle unit filled three tables toward the back of the room.

“We just like to sit down and relax for once, and not be on duty while eating together,” continued Amanda, who said she used the special occasion to wear a dress for the second time this year. “Usually law enforcement is not mixed with religious events. I think it actually can plant a seed [of faith] in tight groups like the motorcycle unit. It opens the conversation. All we talk about is the rough things we see, and we kind of have a stiff sense of humor, [so] it’s just good to break our shield in a different way.”

In her report for the BGEA, Long writes that the evening mood shifted from light-hearted talk and laughter to seriousness as Will Graham thanked the officers and shared the Gospel message.

“I feel like people need this really bad, people are thirsty for something positive,” Amanda said. She and her husband know firsthand the difficulties of serving in law enforcement, especially within two different departments.

“I feel like there’s more light shone on the negative side of law enforcement, like when there’s a bad cop that does something,” added Andrew, still dressed in uniform from his afternoon shift. “That gets more attention and press than the good stuff. It’s nice to be appreciated and attend an event where you feel welcomed and loved.”

Tables of spread out people inside large room

Will Graham addresses the crowd in the Billy Graham Evangelistic Association Dining Hall.

As Will Graham spoke from Matthew 27 in the Bible, he referred to the “No. 1 law enforcement officer mentioned in the New Testament”—Pontius Pilate.

Graham compared the role Pilate held to law enforcement today, sharing how they both are required to make decisions in real-time.

“This man was hated. He represented the law of Rome and had to enforce it,” Graham said.

One decision Pilate had put before him was the fate of Jesus. The Roman leader recognized Jesus was innocent, but didn’t have the courage to take action and help Him. Instead, he washed his hands of the decision and turned Jesus over to the mob. Jesus ultimately was sent to die on the cross.

“Some of you here today lack the courage to take a stand for Jesus,” Graham said. “You have to make decisions on how to get home at night to see your spouse [and] children. You prepare yourself—put on a vest, gun, uniform.”

“You get everything ready but you’re not guaranteed to come home. Have you prepared for life after death?” Graham solemnly questioned.

“Without Jesus, you’ll never spend eternity in heaven,” Graham said. “You say, ‘Will, I thought you were here to cheer us up.’ No, I’m here to tell you the truth. … [If] you do all of this preparation in your physical job but haven’t prepared for life after death, you’re gambling with eternity.”

The moment hit home for the Walterses.

Amanda’s motorcycle unit has been the escort for fallen Mount Holly police officer Tyler Herndon, who was fatally shot in the line of duty Friday. The Billy Graham Rapid Response Team, which deploys at a moment’s notice in natural or manmade disasters, offered a ministry of presence to the devastated suburb of Charlotte and its police department.

“A lot of times the only time you do feel appreciation is when an officer is killed—when people come out and show their support,” Andrew explained. He’s hoping events like Monday’s dinner will be an encouragement to more officers in the future—for multiple reasons.

“It’s people’s life after this life that’s hanging in the balance,” Andrew said. “People in our line of work have a higher chance of that coming to an end sooner. You want to make sure your heart is in the right place so if something tragic does happen, you’ll spend eternity where you want to be.”