Top Posts
Colorado football coach Sanders’ unabashed faith
There’s A Light That Enters Houses With No...
Knowing the One Who Always Keeps His Word
Pregnancy Resource Centers Fight For Life Amidst Opposition
This World is Not Our Home
Lessons Learned From a Gingerbread House
Let There Be Peace on Earth
‘I Wanna Dance’ movie: Whitney Houston’s success and...
Fact Finding, Sight Seeing, and Prayer Walking
Kidney donation led to 8 life-saving surgeries
Home Tags Posts tagged with "León De la Rosa-Carrillo" 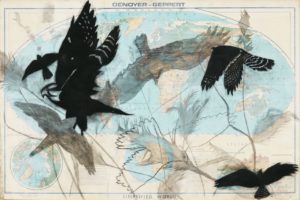 “Cloud when up-roo-ted like kites,” la Rosa exclaims in both Spanish and English.

One poem, Affective Cartography, Santos, has both political and religious connotations.

“A miracle, sy-mem-try, ba-lan-ce, de-bris,” he reads, walking around the room with a cream-colored shirt, gray pants, and no shoes; his beard and curly hair moving with the sway of words. 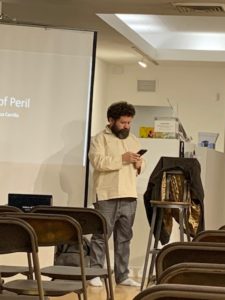 La Rosa and four other contributors are participants of a panel discussion on poetry and public forum, part of the Species in Peril exhibit at 516 ARTS, co-sponsored in partnership with the Art & Ecology Program at the University of New Mexico.

The goal of the exhibit is to focus “on the US-Mexico borderlands, one of the most biologically diverse places in North America. The region traverses six eco-regions and provides home to 1,506 native terrestrial and freshwater animal and plant species, including 62 species listed as Critically Endangered, Endangered, or Vulnerable by the International Union for Conservation of Nature (IUCN) Red List.”

The presenters coalesce art, science, human rights, and history to discuss the ramifications of the boarder wall. 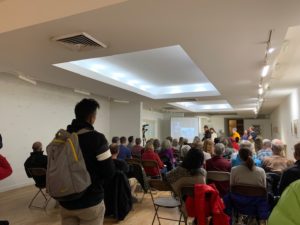 During the hour-and-a-half presentation, the audience heard first from Dr. Rob Peters, a member of the Defenders of Wildlife.  In Dr. Peters presentation, he pulls information from his report “In the Shadow of the Wall” on the effects of the wall on wildlife, calling for a halt to the production of the wall due to the drastic ecological damage it will inflict on the biological environment.  Some of the points he addresses are:

Following Dr. Peters is Dr. Samuel Truett, professor of History at the University of New Mexico.  In Dr. Truett’s presentation, we’re given an historical overview of the US-Mexico border, seeing firsthand—through maps, pictures, and quotes—the changing nature of the US-Mexico border throughout the centuries.  Dr. Peters ends his presentation with a photograph of US and Mexican ranchers sitting on a porch together with their wives. We’re told the ranchers worked in harmony for years, a cross-culture community of people working in accord for a common purpose.  Dr. Peters reminds us that the US-Mexico border relationship has historically been together, not separate.

The final two presentations are by Dr. Ma. Eugena Hernández, talking about the human component of the wall, including Native tribes split in-two, and Michael Berman, an artist who’s chronicled the changes along the border through his photography. 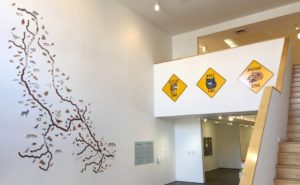 Together, the five presenters would agree with a 516 ARTS statement, “The proposed expansion of the ‘Wall’ threatens not only human communities but also the incredible diversity of life and bi-national investment in conservation.”

Though the Wall generates deep emotion on both sides of the border, representing differing political viewpoints, one thing is certain—people, animals, and the environment are drastically affected. People and the environment should be guarded, particularly by Christians defending life.  For as Christ said regarding struggles at the end of the age, “Whatever you do to the least of my brothers or sisters you do to me” (see Matthew 25:4). Our “brothers and sisters” are more than just people in this instance, but an entire environmental community. All life is a gift from God, considered good (see Genesis 1). In the end, Christ’s call is for compassion. And compassion is concern, a call to care for all of creation, eliciting a loud cry for life.*

* The views expressed in this article represent the author, not necessarily ANS news or its directors.