Top Posts
Colorado football coach Sanders’ unabashed faith
There’s A Light That Enters Houses With No...
Knowing the One Who Always Keeps His Word
Pregnancy Resource Centers Fight For Life Amidst Opposition
This World is Not Our Home
Lessons Learned From a Gingerbread House
Let There Be Peace on Earth
‘I Wanna Dance’ movie: Whitney Houston’s success and...
Fact Finding, Sight Seeing, and Prayer Walking
Kidney donation led to 8 life-saving surgeries
Home Tags Posts tagged with "Logos Hope" 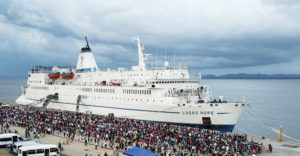 La Union, El Salvador :: Visitors wait on the quayside to board Logos Hope.

Logos Hope is a unique vessel and concept: a platform to share the hope of the gospel, demonstrate Christ’s love in communities around the world, and mobilise the global Church for mission.

The 400 volunteers making up Logos Hope’s crew promote a vibrant community of Jesus followers; coming from more than 60 different nations to serve at sea for a period of one or two years. In each port, they go ashore to partner with local churches and initiatives. They offer practical help, invest time and share their calling in compelling ways, to encourage others to think about service for God’s kingdom.

On board, the vast bookstore offers more than 5,000 titles in English and local languages. For many people around the world, this is their first-ever opportunity to purchase from such a selection of quality literature at affordable prices. Logos Hope is also a hub for Christians from all denominations to connect, and where gospel-based theatre performances, ministry training, conferences and youth events take place.

While Logos Hope has been operating for ten years, the vessel is actually 46 years old; having been built in Germany in 1973. After a ‘first career’ as a car ferry under the names Gustav Vasa and Norröna, she was purchased by the organisation in 2004. A period of fundraising and extensive renovation followed, which included the addition of two new decks. Logos Hope formally entered service as the fourth ‘book ship’ in service for OM, following in the wake of sister ships Logos, Doulos and Logos II. Logos Hope’s maiden voyage into ministry was from Køge, Denmark to Gothenburg, Sweden on February 19, 2009.

Captain Dirk Colenbrander (Netherlands), who was at the helm on that voyage, said: “We sailed out backwards, being pulled by a tug, because the port of Køge had no space to turn around. Then a tug boat had to break up the ice so we could get alongside in frozen Gothenburg! It was the first time some of our crew had ever experienced snow.”

Captain Dirk still serves as interim Master: “One of the most significant things for me is the sharing of personal stories by the crew as we leave each port and hearing how God has used them to change the lives of people they met in that area,” he said.

In her decade of ministry, Logos Hope has:

“I feel blessed to work with dedicated Christians who serve sacrificially on board and on shore to maintain the constant operation of the ship. What I believe continues to draw people to the vessel is that it is a catalytic platform: equipping people and mobilising them to create vibrant communities of Jesus followers wherever they go,” said Seelan.

The anniversary was marked on board in Chile, where Logos Hope is currently on a two-year tour of Latin America – her first visit to the South American continent. The focus of the ship’s time there is a special collaboration with OM Latin America, to mobilise Latino believers into mission to least-reached communities across the globe.

It is of note that the ship is currently making OM’s first-ever call in the port of Lirquen, Chile – proving that, almost 50 years after the original Logos ventured out, there are still new places to impact as we share knowledge, help and hope around the world.

Since 1970, OM Ships International has:

Logos Hope, is currently open to the public in Lirquen, Chile.