Top Posts
Colorado football coach Sanders’ unabashed faith
There’s A Light That Enters Houses With No...
Knowing the One Who Always Keeps His Word
Pregnancy Resource Centers Fight For Life Amidst Opposition
This World is Not Our Home
Lessons Learned From a Gingerbread House
Let There Be Peace on Earth
‘I Wanna Dance’ movie: Whitney Houston’s success and...
Fact Finding, Sight Seeing, and Prayer Walking
Kidney donation led to 8 life-saving surgeries
Home Tags Posts tagged with "Magen David Adom" 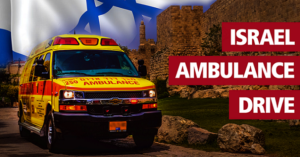 MDA’s fleet of 1,200 ambulances — provided almost exclusively by donations, many from American Christians supportive of Israel — includes 60 vehicles equipped for off-road use, 50 of which are heavily armored for duty in high-risk areas, and 120 retrofitted to operate as Covid-19 transport units.

Twelve were damaged during the attacks. And an additional 100 ambulances were taken off the streets this year, due to wear and tear. An MDA ambulance, officials say, will stay in service for an average of 10 years and can answer up to 10,000 calls.
“If an ambulance isn’t available, or has to come from too far away, the outcome is unthinkable. Oftentimes, an ambulance’s response time is the difference between life and death,” said Catherine L. Reed, chief executive officer of American Friends of Magen David Adom (AFMDA).
“MDA’s thousands of first-responders are almost all volunteers. And combined with the fact that almost every ambulance in the country was provided at some point by the generosity of others…with what’s happened this spring, it’s fair to say Israel needs its friends around the world to step up right now.”
Most of the ambulances, Reed noted, are built and outfitted in the United States. AFMDA plans to donate as many ambulances as possible this summer, some on behalf of Christian supporters in the U.S.
“There’s a serious and immediate need,” she said. “We can only hope and pray that in the meantime, there isn’t another attack or natural disaster that could leave thousands beyond the timely reach of emergency help.”
Multiple rockets were fired at northern Israel last Tuesday morning, setting off incoming rocket sirens in communities in the eastern Galilee.
Those interested in contributing to the relief effort or in helping provide ambulances are encouraged to visit AFMDA’s website, https://savinglivesinisrael.org.
July 26, 2021
FacebookTwitterPinterestEmail