Top Posts
Colorado football coach Sanders’ unabashed faith
There’s A Light That Enters Houses With No...
Knowing the One Who Always Keeps His Word
Pregnancy Resource Centers Fight For Life Amidst Opposition
This World is Not Our Home
Lessons Learned From a Gingerbread House
Let There Be Peace on Earth
‘I Wanna Dance’ movie: Whitney Houston’s success and...
Fact Finding, Sight Seeing, and Prayer Walking
Kidney donation led to 8 life-saving surgeries
Home Tags Posts tagged with "Manny Pacquiao"

At first, L.A. Times reporter Dylan Hernandez was shocked by the size of the breakfast gathering arranged by Filipino 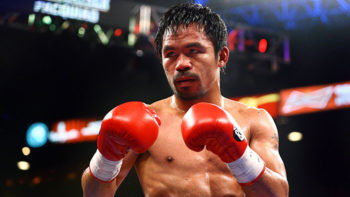 Manny in the ring (Wikipedia)

boxer and senator Manny Pacquiao. Then he was confounded by the boldness of his faith.

Hernandez walked into the relatively modest house in Central Los Angeles and was stunned to see 100 people enjoying breakfast together, with Pacquiao seated at the head of a table for 10.

Hernandez joined the table of the 40-year-old boxer and began to pepper him with questions about his faith and boxing career.

When Pacquiao finished his meal, he folded his hands together and bowed his head in prayer. He prayed not only before the meal but after the meal!

The L.A. Times reporter was invited to join Pacquiao in prayer.

“Are you okay?” the boxer asked.

“Yeah, I love babies,” Hernandez replied, thinking the question was prompted by the fact that a man was holding a baby next to him.

“Oh …Really, nothing,” the reporter said. “My mom’s Japanese.”

“We don’t believe in anything,” the reporter said.

Pacquiao reached out and placed his hand on the forearm of the reporter.

“There is a God,” the boxer exhorted.