Top Posts
Colorado football coach Sanders’ unabashed faith
There’s A Light That Enters Houses With No...
Knowing the One Who Always Keeps His Word
Pregnancy Resource Centers Fight For Life Amidst Opposition
This World is Not Our Home
Lessons Learned From a Gingerbread House
Let There Be Peace on Earth
‘I Wanna Dance’ movie: Whitney Houston’s success and...
Fact Finding, Sight Seeing, and Prayer Walking
Kidney donation led to 8 life-saving surgeries
Home Tags Posts tagged with "Margaretha Alt"

JAKARTA, INDONESIA (ANS – September 8, 2018)– The secretary-general of Indonesia’s main Pentecostal denomination says up to 20 church members are killed annually due to their faith in Jesus Christ amid mounting concern about spreading Islamic extremism here. Johannis (‘John’) Hus Lumenta spoke at church headquarters in Jakarta, where mosques compete for attention with the Muslim call to prayer reverberating throughout this vibrant capital.

In a wide-ranging interview with BosNewsLife, the news partner of ASSIST News Service (ANS), the 66-year-old evangelical leader expressed frustration over the persecution faced by his Pentecostal Church in Indonesia or ‘Gereja Pantekosta di Indonesia’ (GPdI), which claims to have more than three million members. “We want the world to know that we are suffering for Christ,” Lumenta said. “Some of our people are suffering till death. But we don’t try to compromise. We are not people who compromise, but fighters for Christ.”

Lumenta added: “We lose every year members because of their faith in Christ. It could be 10 to 20 members.” The father-of-three is among several devoted Christians meeting BosNewsLife while Indonesia prepares for its 70th anniversary as a sovereign nation. The Netherlands handed over sovereignty to most of its former colony in 1949. But since then, Christians are among Indonesians suffering under decades of autocratic rule, endemic corruption, and now a rise in conservative and hard-line interpretations of Islam.

Lumenta, who is also a pastor, has mixed feelings about Indonesia’s links to its former colonial master. He recalled that Dutch Christians founded his church in 1921. Songs written by late Dutch missionary Margaretha Alt are still part of the liturgy in its more than 22,000 congregations.

“The doctrine of these songs is important. We don’t want to forget and abandon our roots. As a church, we remain deeply indebted to the Dutch. I regret that because of the (colonial) history, we don’t have a close relationship with the Dutch Pentecostal churches. I hope that will change before the second coming of Jesus Christ.”

He believes that ties with the Netherlands and other countries are crucial as evangelical Christians face new pressures in Indonesia, the world’s largest Muslim nation. Backed by Islamic hardliners, “local authorities everywhere are opposing us,” the preacher noticed. “We have a lot of problems in, especially mostly Muslim populated areas. Churches have been bombed, closed and burned. Believers have been beaten and murdered for their faith.” However, “They can close our churches, but they cannot stop the work of the Holy Spirit through our lives,” he warned.

Christians are linking these attacks to militants and the increasing influence of Islamic hardliners and conservatives who have pressed for the adoption of harsh Islamic law, or Shariah, throughout Indonesia. Further complicating the lives of Christians are blasphemy laws, introduced in 1965. They were initially used eight times in the 40 years that followed until 2004, BosNewsLife learned. But in the decade after the election of Susilo Bambang Yudhoyono as president in late 2004, there had been 89 cases brought to court and 89 people jailed for blasphemy, according to rights activists familiar with the situation.

Under his successor Joko “Jokowi” Widodo, another 17 people received prison sentences for blasphemy in decisions backed by growing Muslim hardliners. Even government officials face pressure. The former governor of Jakarta, a Christian, was tried and jailed last year for blasphemy. Muslim groups accused Governor Basuki Tjahaja Purnama of insulting Islam after saying that his political rivals were using the Koran to deceive voters.

Lumenta, who knows the governor well, disagrees. “Ahok received a two-year prison sentence because he cited the Scriptures in his speeches,” the Pentecostal leader said, referring to the other name used by the governor. “Ahok said for instance: ‘I don’t want to live but to live for Christ.’ He is a man of principle and integrity, and I know that God is taken care of him. I often met him, for instance in a church where I preached. I pray that God will continuously use him.”

Lumenta also condemns the August 21 decision by an Indonesian court to sentence a woman to 18 months imprisonment for blasphemy. Her crime? ‘Insulting Islam’ for complaining that a neighborhood mosque was too loud. Meiliana, a 44-year old ethnic Chinese Buddhist had argued that the Muslim call to prayer, repeated five times a day, was being played too loudly at the mosque near her house in North Sumatra. “There is much injustice in Indonesia,” Lumanta said about the sentencing.

He is skeptical about Indonesian President Jokowi, who won the elections of July 2014. Optimists were viewing the president as part of a new breed of politicians with promises of religious tolerance and more prosperity. It helped that the Indonesian leader was relatively untainted by the country’s endemic corruption and seen in touch with ordinary Indonesians because of his humble background as a furniture maker while his father was a wood seller. “But words are not always put into practice. There are still many irregularities in Indonesia,” Lumanta stressed.

Despite hardships, the GPdI continues with evangelism with teams and individuals traveling through volatile areas. Lumanta: “We have to do that; it is God’s Commission to evangelize. These people here are perishing if we don’t stand up for Christ. Most Indonesians don’t know the Truth. Many have little education.  But it is wonderful to see that so many Muslims, Buddhists, and others come to Christ.”

His church also buys radio and television airtime at local broadcasters. “We would love to go nationwide, but that involves giving a lot of money for the government. Our resources are limited.” He is pleased that church members may seek evangelism opportunities at the ongoing Asian Games sports extravaganza. “Some church members won medals there.”

Christians comprise less than 10 percent of this nation’s 260 million people spread across a chain of thousands of islands between Asia and Australia. But the GPdI plans to have churches in every village, moves that are likely to cause more tensions with Muslim authorities. “The biggest challenge now is to see that everybody has the right to observe his or her religion and faith. It is a problem if the government intervenes in the way people want to worship God,” Lumanta stressed.

The Pentecostal churchman wants God to “open the hearts” and eyes of all government officials and others currently hindering religious freedom across the Asian country.

Even without such progress, the GPdI will continue its mission, he said. “I know that God is asking us to bear the cross, and we know that. At the same time we know that as long as we live, nothing can stop us…”

Lumanta hopes Christians in the West will follow that example. “I think that people in countries such as the Netherlands have become too comfortable. They may be tempted to think: ‘With so much welfare, who needs God?’. That explains why there are so many empty churches in the West. Perhaps someday we can come and preach. Christians have to be a light and salt in this world. I think sometimes the problem in Christianity is that people are claiming to be Christians, but they don’t live like Christ.”

Lumanta also urges Christians in the West to support his church. He admits that there were troubles surrounding expenditures. “But we have become very transparent, with all expenditures published in details.” 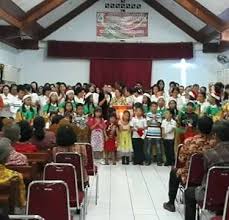 With so many sensitive issues on his plate, Lumanta thought about resigning. “I said six months ago that others should take over as I considered myself more of a hindrance. But our elected leader John Weol said that he would resign to in that case.”

Lumanta, who oversees evangelism and other crucial activities, was never in a hurry to become secretary-general. He had high cholesterol and couldn’t walk. He doesn’t blame that on the devil, but on his love for french fries, satay and mayonnaise. “It was my fault, not satan’s mistake,” Lumanta revealed to BosNewsLife.

He was appointed to become secretary-general anyway. Now nearly three years and healthy choices later, his personal life has changed. “Thank God. I can walk, and I am eating fish.”

Humor and his faith in Christ seem to keep him going.

(Stefan J. Bos on assignment in Indonesia investigating the plight of persecuted Christians at a time of turmoil in the world’s largest Muslim nation).