Top Posts
Knowing the One Who Always Keeps His Word
Pregnancy Resource Centers Fight For Life Amidst Opposition
This World is Not Our Home
Lessons Learned From a Gingerbread House
Let There Be Peace on Earth
‘I Wanna Dance’ movie: Whitney Houston’s success and...
Fact Finding, Sight Seeing, and Prayer Walking
Kidney donation led to 8 life-saving surgeries
The Power of Curiosity
When Love Came Down at Christmas
Home Tags Posts tagged with "Mass killing"

KANDHAMAL, INDIA (ANS – Sept.30, 2018) – Mass killings in India’s Christian community during Orissa’s massive, anti-Christian riots in 2008, widely considered to be the worst incident of Christian persecution in India’s independent history, still cause fear in the region. Even after 10 years, many of the riot victims’ lives remain shattered. 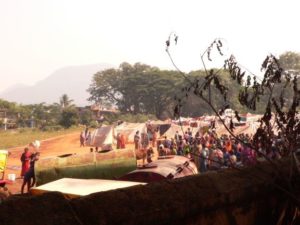 Tens of thousands were displaced during the anti-Christian riots involving mass killing of Christians in Orissa in 2018. (ICC Photo)

After three months of violence, at least 91 Christians were killed, many hacked to death by axes and machetes, and at least three Christian women were gang-raped. Additionally, nearly 56,000 people were displaced, forced to flee into the forests as mobs burned down more than 5,600 houses, 300 churches, and other Christian institutions.

Abhimanyu Nayak was one of the Christians killed 10 years ago. On August 26, 2008, Abhimanyu was captured by a mob, tied to a tree outside of his home, and set on fire as his family watched. While speaking with ICC, Priyatama Nayak, Abhimanyu’s widow, said that even though 10 years have passed, she still gets nightmares that her son will be killed in the same way.

“I get scared whenever my son steps out alone on any errand,” Priyatama said. “I feel afraid and restless [until] he returns because I think my son will be attacked or killed just like my husband.”

Pastor Abasalom Anand, a pastor in Kandhamal during the riots, said, “Fear and terror still grip me when I think of those days.”

“At 7:00 a.m. on August 25, mobs of people numbering roughly 5,000, armed with swords, guns, axes, and petrol, overran our neighborhood of Nuasahi and overturned our lives like never before,” Pastor Anand recalled.

“We are still in terror, not feeling safe,” Pastor Pradeep Nayak, another survivor of the 2008 violence, told ICC. “At every corner of the market, we feel something is going against Christians.”

Many Christians displaced by the violence have been unable to return to their home villages due to threats and a lack of government assistance. 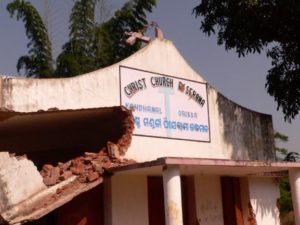 Christ Church was one of the buildings damaged during the mass killing of Christians during Orissa Riots of 2008 (ICC Photo).

“Justice has been difficult for the Kandhamal victims,” Dr. John Dayal of the United Christian Forum told ICC. “The state has absolutely refused to rebuild more than 300 churches that were destroyed as well as several educational and training institutions.”

“We hope the state will become more conducive so that freedom of faith is firmly re-established in the region,” Dr. Dayal continued. “The wonderfully brave and faithful Christians in Kandhamal deserve respect, solidarity, and support.”

William Stark, ICC’s Regional Manager, said: “A decade has passed since Christians in India experienced the worst anti-Christian violence their country has ever seen.

“Despite the passage of time, many of these victims have yet to receive justice due to discrimination and poor police work that followed the riots. In many cases, Christians driven from their homes by mobs in 2008 are still unable to return to their villages unless they agree to convert to Hinduism.

“The Indian government must do more to ensure justice for these victims and take greater steps to rebuild the lives that were devastated by the 2008 riots.”