Top Posts
Knowing the One Who Always Keeps His Word
Pregnancy Resource Centers Fight For Life Amidst Opposition
This World is Not Our Home
Lessons Learned From a Gingerbread House
Let There Be Peace on Earth
‘I Wanna Dance’ movie: Whitney Houston’s success and...
Fact Finding, Sight Seeing, and Prayer Walking
Kidney donation led to 8 life-saving surgeries
The Power of Curiosity
When Love Came Down at Christmas
Home Tags Posts tagged with "“Maverick Priest”"

“Maverick Priest” honored for global peacemaking from Vietnam to Minnesota

MINNEAPOLIS, MN (ANS) — For more than a half-century, 91-year-old Rev. Harry Bury has devoted his life to global peace activism, from volunteering as a human shield in the conflict between Israelis and Palestinians — and subsequently being held hostage at gunpoint — to projects with Mother Teresa and protesting the Vietnam War.

According to Jean Hopfensperger, the Religion, Faith and Values reporter for the Minneapolis Star Tribune, he now is taking aim at another mammoth challenge: introducing nonviolent solutions to stem unrest in the Twin Cities.

“I’ve wanted to live what I preach,” said Bury. “This [peace activism] is my philosophy of life and this is my life lived.” 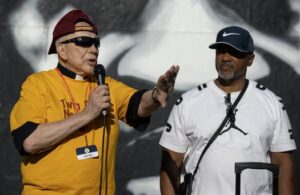 For his decades of work in the nonviolence movement, Bury received an award Wednesday from the Association of U.S. Catholic Priests as a model of living his Catholic faith. The association, meeting in the Twin Cities this week, is an independent group of clergy whose priorities include fighting racism, promoting nonviolence and halting climate change.

“This is a guy who stepped out of a normal, expected role of a Catholic priest and became a tireless pursuer of peace and justice,” said the Rev. John Malone, a retired pastor and University of St. Thomas professor who introduced Bury at the awards ceremony. “And he put everything he had into it.”

The Star Tribune says Bury, who grew up in north Minneapolis, never set forth to lead a life of global activism and education. Ordained a priest in 1955, he was assigned to the University of Minnesota’s Newman Center by the 1960s. Many students opposed the Vietnam War, and over time he became convinced the war was “not only immoral, but a mistake.”

Bury eventually traveled to Vietnam to learn more about the conflict. In 1971 he was among four people who chained themselves to the gates of the U.S. Embassy in Saigon to protest U.S. involvement. Over the years he made more than a dozen visits to Vietnam, including one in 1972 when he was part of a delegation that escorted three American pilots who had been held hostage back to the U.S.

Hopfensperger writes: “It was the beginning of decades of activism and education that took Bury to Thailand, Cambodia, Hong Kong, India and the Philippines. His most perilous journey was when he was invited to be part of a ‘human shield’ delegation in 2005 on the Gaza Strip, a Palestinian territory. He was taken from his hotel room, hooded, and held hostage for several hours by Palestinian gunmen before being released.”

Bury’s 2018 memoir, titled “Maverick Priest,” reveals the twists and turns of a life journey. It reveals he is no ordinary cleric. Chapter headings include “Mass at the Pentagon,” “My Second Arrest,” “Stranger in Saigon” and “Abducted!”

According to the Star Tribune, Bury was a good friend of Mother Teresa, now known in the Catholic Church as St. Teresa of Calcutta. Bury was among 44 clergy invited in 2004 to celebrate her beatification with Pope John Paul II on the steps of St. Peter’s Basilica in Rome.

“Thirty-three years earlier, in 1971, the Swiss Guard had arrested me for saying a protest Mass on those very same steps,” Bury wrote in his book. “Who can predict the strange ways of God?”

Bury holds a Ph.D. in organizational behavior, and taught at Baldwin Wallace University in Berea, Ohio, from 1979 to 2015. He moved back to the Twin Cities in 2015.

Bury’s most recent project is called Twin Cities Nonviolent. “It’s one chapter in a national network that promotes peaceful conflict resolution, teaches nonviolent problem-solving strategies and offers resources to do it,” Hopfensperger reports.

Bury still supports Mother Teresa’s religious order, the Missionaries of Charity. He remains active in the Association of U.S. Catholic Priests, an organization not always in lockstep with the U.S. Conference of Catholic Bishops.

“Harry is a humble man who sees problems in the world and looks for peaceful methods to resolve them,” said the Rev. Kevin Clinton, a retired priest from New Prague and a leader in the priests’ association.

“Right now, [conflict] seems to be all about who can shout the loudest,” said Clinton. “If those methods had worked in history, we wouldn’t be where we are today.”