Top Posts
Colorado football coach Sanders’ unabashed faith
There’s A Light That Enters Houses With No...
Knowing the One Who Always Keeps His Word
Pregnancy Resource Centers Fight For Life Amidst Opposition
This World is Not Our Home
Lessons Learned From a Gingerbread House
Let There Be Peace on Earth
‘I Wanna Dance’ movie: Whitney Houston’s success and...
Fact Finding, Sight Seeing, and Prayer Walking
Kidney donation led to 8 life-saving surgeries
Home Tags Posts tagged with "Mchael Ireland"

ILFORD, Essex, UK (ANS) — A young former Ilford resident now residing in Chigwell was so inspired when she learned about Ilford’s historical past in helping the homeless, whilst reading an Eric Arthur Blair aka George Orwell novel, that she conducted her own research into the town’s desperate vagrancy past.

Whilst serving homeless people in Ilford via the British Asian Christian Association(BACA), based at Clementswood Community Centre, Ilford, Hannah was told about Ilford’s help for rough sleepers that dated back at least a century.

Local Pub Landlord David Christof told Hannah about the mention of an Ilford Cafe In Orwell’s first full-length published work. Hannah bought a copy of the book and was fascinated by the similarity of the lives lived by the homeless then and now.


Imbued with a passion to learn more, she decided to find the location of the food establishment that served homeless people, somewhat ungraciously, around 100 years ago.

Initial internet searches revealed little information, however after some help from Redbridge Museum’s Heritage Centre, Salvation Army Heritage Centre and Ilford Historical Society she has now formed her own opinion on the whereabouts of the 1920’s tea shop.

Hannah has narrowed down to two potential sites for the famed but unnamed location, mentioned in the classic novel ‘Down and out in Paris and London’. Hannah hopes one day to get Redbridge Council to install a plaque to commemorate the first ever mention of Ilford in a popular novel by a distinguished writer.

Hannah said: “Life in East London for the homeless in the 1920’s involved many of the same survival techniques, dumpster diving, theft, begging, fencing and hawking.

“What has changed in many cases is the standard of support that homeless people get.

“Safeguarding and dignity measures have improved and rough sleepers are no longer put through hard-labour or forced to share the same bath water with 10 other people, for instance.” 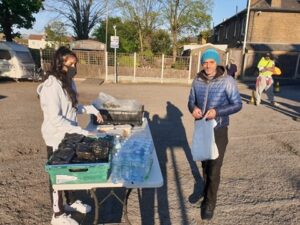 She added: “Church organisations serving the homeless have improved in the way they share the gospel with homeless people they support.

“Most of us no longer force prayer and Bible readings on visitors (as described in Orwell’s book) but provide access to free Bibles, Spirit-led counselling and prayer for those who want it.

“Our desire to see people spiritually-saved has not diminished.”

Hannah compiled her research and wrote an article for Ilford Historical Society, which has been included in the August edition of their newsletter.

The group have given her article pride of place as a double page spread in the centre of the publication, including a image taken with Hannah in Fleet street nearby a ‘ghost sign’ of the former Aerated Bread Company, whose venue in Ilford is where Hannah believes homeless people would have been served 6 shilling meals through a voucher system.

Local Historian Georgina Green, who edits the newsletter for the group said: “Hannah has written a very interesting and passionate article.

“She delves into historical context with amazing precision, considering she is not a history student.

“Hannah’s passionate and well written account reminds us that history is relevant to all ages.

“I hope her article will trigger more interest in our group and perhaps further research contributions from young people in Ilford.”

lford Historical Society has been established over 45 years. It is governed by a committee elected by its members at Annual General Meetings.  Meetings are organized during the winter on the 2nd Monday of each month and are held at Redbridge Central Library from September till May inclusive. There are illustrated talks on local and general history with an interval for free refreshments. Visitors are welcome to attend for a small fee payable at the door.

Hannah is a volunteer at BACA and helps feed homeless people every Saturday at Clementswood Community Centre. The group hopes to paint a mural celebrating the history of the borough on one of their outer walls this year. It will include a reference to Orwell’s famous mention of the Borough in the 1920’s.

You can read Hannah’s full article in the IHS Newsletter (http://tinysurl.com/y3e9ck3r)  You can read her report complete with a video and more images on her blog https://tinyurl.com/y6oeh44j