Top Posts
Colorado football coach Sanders’ unabashed faith
There’s A Light That Enters Houses With No...
Knowing the One Who Always Keeps His Word
Pregnancy Resource Centers Fight For Life Amidst Opposition
This World is Not Our Home
Lessons Learned From a Gingerbread House
Let There Be Peace on Earth
‘I Wanna Dance’ movie: Whitney Houston’s success and...
Fact Finding, Sight Seeing, and Prayer Walking
Kidney donation led to 8 life-saving surgeries
Home Tags Posts tagged with "Mecca"

MECCA, SAUDI ARABIA (ANS) — More than two million Muslims converged on Mecca this year on the last day of the Hajj, an annual Muslim pilgrimage to the Islamic holy site and a pillar of the Islamic faith.

Mission Network News (MNN) reports that during the Hajj, Muslims spend several days circling the black cube called the Kabaa and performing other rituals. They earnestly seek Allah’s favor and desire to grow closer to God.

Muslims also seek dreams and vision on the Hajj. 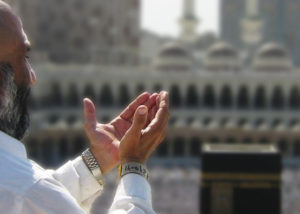 A Muslim at prayer in Mecca

Some Muslims, like Yusef, end up having a very different dream from what they thought — and they completely change their life.

In LaHaie’s words, “All his life, Yusef, a Muslim in Asia wanted to see the Prophet Muhammad in a dream. This was his longing. One night he had that dream but he was very troubled by it.

“In his dream, Muhammad was kneeling before Jesus, and Jesus was on a throne.”

LaHaie said: “[Yusef] was really troubled and perplexed by this. Why would Muhammad, the greatest prophet, be kneeling before the Prophet Jesus?”

MNN says that often, when Muslims ask their Imams about these dreams of Jesus, their Imams dismiss the dreams as satanic. “But Yusef just was convinced that it wasn’t a satanic dream.”

Yusef had the same dream the following night.

“Jesus is on the throne. Muhammad is kneeling before him. But in this dream, Jesus takes a hold of [Yusef], lifts him up into the air, and they rise up over Yusef’s neighborhood…. Jesus takes him several blocks away and they hover over this building and it’s a church. Inside the church, they can hear believers praying for Muslims — praying that Muslims will come to know Jesus.”

In his dream, Jesus then told Yusef to go to the church and talk to the pastor. Yusef noticed the church in the dream was close to his house, but he didn’t even know a church was there. When he went, sure enough, there was the church from his dream!

LaHaie said: “He met the pastor there. He told the pastor about the dreams he’d had and the pastor was able to share the Good News with him. Yusef decided to follow Jesus!”

Yusef fell in love with Jesus — and it all started with a dream. “Yusef describes being with Jesus like having liquid love pouring all over him and all through him.”

MNN says Christians in the Muslim world and on the mission field hear many amazing stories like Yusef’s. God is showing how much He loves Muslims by miraculously revealing Himself to them through His Son, Jesus.

LaHaie said the Hajj is a timely period to ask the Holy Spirit to move in the Muslim world. As Muslims seek spiritual truth on the Hajj, pray for Jesus to meet Muslims where they are in dreams and visions.

Secondly, it may seem outrageous, but there are believers from a Muslim background who are in Mecca — the heart of Islam — covertly reaching fellow Muslims with the Gospel during the Hajj.

“They are doing God’s work, even as we speak. So pray that these Muslim-background believers will win Muslims to Jesus right there in Mecca!” said LaHaie.

LaHaie suggested: “A great way to just move into a conversation would be to say, ‘Hey, I understand that the Hajj is going on right now. Tell me about that! What does that mean with your faith? How does that play into your worship?’ Find out as much as you can about it. Be interested and curious and show that you respect the fact that they want to seek God.

“Then use that as a bridge…. Tell your story of what Jesus Christ has done for you. I think, rather than get into a debate, be curious about their faith, be genuinely interested in their faith and in them as a person, and then just be open about being a follower [of Jesus] and share your story.”

MNN encourages Christians to join what God is doing in the Muslim world at www.frontiersusa.org