Top Posts
Colorado football coach Sanders’ unabashed faith
There’s A Light That Enters Houses With No...
Knowing the One Who Always Keeps His Word
Pregnancy Resource Centers Fight For Life Amidst Opposition
This World is Not Our Home
Lessons Learned From a Gingerbread House
Let There Be Peace on Earth
‘I Wanna Dance’ movie: Whitney Houston’s success and...
Fact Finding, Sight Seeing, and Prayer Walking
Kidney donation led to 8 life-saving surgeries
Home Tags Posts tagged with "Medllin Drug Cartel"

WEST PALM BEACH, Florida (ANS) – A former drug lord and drug trafficker will share life lessons and never-before-heard stories from his days as one of the founding members of the drug trafficking group that would give rise to the world-famous Medellin Drug Cartel. 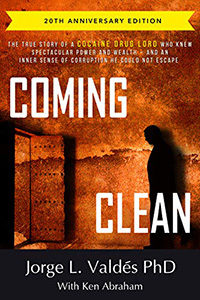 Dr. Jorge Valdes will deliver the keynote speech at the Lumen Institute’s National Summit at the University Club in New York City on October 6th, speaking to a diverse audience of business leaders and cultural influencers who are pivotal to guiding millions of people back to biblical morality and family values.

This event kicks off Dr. Valdes’ speaking tour in support of his new books published this month on Amazon: the Narco Mindset series as well as Coming Clean: The 20th Anniversary Edition.

Dr. Valdes will His stories range from an assassination attempt by the notorious Pablo Escobar to kill him for an unbelievable reason to living a lavish, immoral lifestyle that was nothing but empty, self-destructive and corrupt.


His new book Narco Mindset, along with the accompanying workbook for small group study or individual reflections, is a blueprint for people to return to moral values, renew an emphasis on good character development, address the void in a person’s heart, and strengthen families and child-rearing with the tenacity, commitment and boldness of the “narco mindset.”

“We are in a war for the soul of our children,” said Dr. Jorge Valdes, a former, infamous drug trafficker-turned-visionary leader who now aligns with the mission of the Catholic church for a redemptive future.

“This is a wake-up call that all of us need to continually reflect on our own lives and what is truly important. When the pages of history are written, will history remember your name? It is the legacy and culture that we leave for our children that will make a difference and make history.”

Dr. Valdes came to America penniless and ascended to be one of the top students at the University of Miami, while working for the country’s fastest growing Federal Reserve Bank in Miami at the age of 17. By the age of 21, at a major turning point in his life resulting from a series of small compromises that spun out of control, he became the biggest importer of cocaine in the United States in the mid-1970s.

Through his speech and his books, he tells the story of his long road to contrition, redemption and, in a twist that narcomania has never seen, earning a Ph.D. in biblical studies, like a modern-day road to Damascus story.

The man who was likely more responsible for getting Americans hooked on cocaine in the 1970s and early 1980s than anyone else is now the same man who aims to break the vicious hold that hardcore drugs have on America’s youth before it is too late and another generation is lost.

With unparalleled understanding, a revolutionary outlook and plain-spoken veracity, Dr. Valdes has a bold vision for how to stop drug abuse before it takes hold and ravages the next generation.

Lumen Institute is an organization that provides highly personalized formation for leaders.

It was founded in 2005 by a small group of New York businessmen, and Legionary of Christ priests. Together, they responded to a critical need for faith-based formation for today’s business leaders.

The author of this story, Michael Ireland, is a self-supported media missionary with ANS. Click here to support him as a missionary journalist.
October 1, 2019
FacebookTwitterPinterestEmail