Top Posts
Knowing the One Who Always Keeps His Word
Pregnancy Resource Centers Fight For Life Amidst Opposition
This World is Not Our Home
Lessons Learned From a Gingerbread House
Let There Be Peace on Earth
‘I Wanna Dance’ movie: Whitney Houston’s success and...
Fact Finding, Sight Seeing, and Prayer Walking
Kidney donation led to 8 life-saving surgeries
The Power of Curiosity
When Love Came Down at Christmas
Home Tags Posts tagged with "MIddle East Christianity"

Christianity in the Middle East now a significant minority

MIDDLE EAST (ANS) — In the early part of the 20th century, Christians of varying denominations once made up one-third of the complicated religious and ethnic fabric that characterises the Near East. 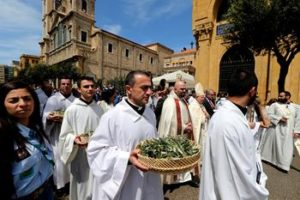 A religious procession in Beirut, Lebanon

Today, however, that number has dropped to a staggering 5% and putting the world’s largest religion at risk of becoming extinct in its spiritual homeland, according to a report from AINA — Assyrian International News Agency, citing an article from New Europe https://www.neweurope.eu .

Christianity is still the second largest religion in the region with over 20 million members living mostly in Lebanon and Egypt, as well as in Iraq, Iran, Syria, and Jordan.

Lebanon, which has traditionally had a highly influential Christian majority of Maronite Catholics and Eastern Orthodox, continue to have a strong Christian presence with roughly 40% belonging to the various groups of Eastern Rite Catholics, as well as the large number of Greek and Armenian Orthodox, all of whom play a significant political and social role in Lebanese society. The Maronites are an Eastern Catholic church that is in full communion with the Pope and the Roman Catholic Church and are Lebanon’s largest Christian denomination and its main power broker. As a result, the country’s prime minister must always be a Maronite under the Lebanese constitution.

The Lebanese Christians are followed by their counterparts in Egypt, the populous Arab nation, in terms of size and their relative importance in society. Of Egypt’s 90 million people, 15% of the population is Christian, most of whom are Copts — an ethnoreligious group that is indigenous to Egypt.

Those relatively healthy and thriving communities are, however, exceptions in the modern-day Middle East. Unlike a century ago, the current situation sees most the centuries-old communities from the Fertile Crescent to the Levant and the steppes of Anatolia rapidly dying out if they hadn’t already met their demise.

Successive waves of war, genocide, mass emigration, ethnic cleansing, discriminatory government policies, and the rise of radical Islam has helped to nearly destroy the once thriving Christian community in the Middle East and thereby transforming the Arab population from a once-multi-confessional people into an almost mono-religious community of Sunni and Shiite Muslims.

The French aid organisation SOS Christiens d’Orient has called for the creation of a “State Secretariat” which would be devoted to the plight of Oriental Christians.

“We invite the French government to create a State Secretariat by the Minister of Foreign Affairs for Eastern Christians or Christians who face persecution…This would allow France to be faithful to its vocation of maternal support to our elder brothers in faith while refraining from interfering in the sovereign choices of the peoples and the Eastern nations,” said Benjamin Blanchart, SOS Christiens d’Orient’s chief executive.

The mission for the proposed state organ would be to halt “the disappearance of Eastern Christianity in the Middle East” as, according to the group, to do so would be to commit to the defence of freedom of religion in the region.