Top Posts
Colorado football coach Sanders’ unabashed faith
There’s A Light That Enters Houses With No...
Knowing the One Who Always Keeps His Word
Pregnancy Resource Centers Fight For Life Amidst Opposition
This World is Not Our Home
Lessons Learned From a Gingerbread House
Let There Be Peace on Earth
‘I Wanna Dance’ movie: Whitney Houston’s success and...
Fact Finding, Sight Seeing, and Prayer Walking
Kidney donation led to 8 life-saving surgeries
Home Tags Posts tagged with "Mike Pompeo" 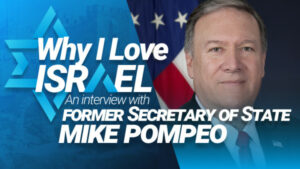 While the Middle East was not the only region in his portfolio in either job during the Trump-Pence administration – witness the challenges he confronted with Russia, China, North Korea, and Turkey, just to name a few – it became clear to critics and allies alike that Pompeo had a deep love and affection for Israel and the Jewish people, says Author Joel Rosenberg at https://www.allisrael.com

Where does that love come from?

Rosenberg asked Pompeo that very question in an exclusive interview for a new series ALL ISRAEL NEWS is doing with prominent Christian and Jewish leaders on “Why I Love Israel.”

Without hesitation, Pompeo told Rosenberg it comes first and foremost from his devout Evangelical Christian faith and love of the Bible.

Here’s the transcript of part one of their two-part interview https://www.allisrael.com/former-secretary-of-state-mike-pompeo-tells-all-israel-news-why-he-loves-israel-about-the-first-visit-he-ever-made-here-and-why-he-wants-to-come-back-soon


ROSENBERG: It’s great to have you. So, you’re an Evangelical Christian. You’re very open about that. You and your wife taught fifth grade Sunday school until life got a little too busy working for the CIA as director, and then, of course, as secretary. Talk to me about where your love for Israel comes from. I’m just intrigued with both from your personal background, from your faith – what animates that?

POMPEO: Well, they are a very special country in a very special place. Those of us who take seriously the words of the Bible, and whose faith has a central understanding of the places that Jesus worked and lived, can’t help but have a special love and a special understanding of how special this place is. It’s also, as a geopolitical matter, as a global matter, it’s a place where these three Abrahamic faiths all come together in Jerusalem. The history there – the scores of people who were faithful servants of the Lord who have walked in that place – makes it a unique and special location. And it was truly a privilege to serve as America’s secretary of state and to work to build out the important relationship between our two sovereign states to make each of our peoples more secure and to get the opportunity to work for a president who made the decision, the right decision, to allow Jerusalem to be designated as the capital by the United States and to move our embassy there was truly glorious.

ROSENBERG: It was amazing. And so your experience just as secretary of state – if we just limited it to that – has had a historic impact on U.S. relations with Israel. Again, recognizing Jerusalem as our capital. It hasn’t been done by almost any other country in the world. Moving the U.S. embassy here was a big deal. But let’s go back a little bit more. I actually don’t know – I’ve never asked you in all the years we’ve known each other – when you first came to Israel. Was that in a private capacity, or in the House of Representatives? What was your first trip here?

POMPEO: Joel, the first time I came here was when our son was 15 years old. I was a civilian. I was running a manufacturing company in Kansas. And I wanted to go visit Israel first to see obviously the historic important Christian sites. But I also, when I was a cadet at West Point, had studied these amazing tank battles. I’d been an army officer and I wanted to go see what it looked like up on the Golan and see where the amazing armor fights had taken place there in ‘67 and then again in 1973. And so we did all of that. My wife and I and my son took a trip. We spent about a week. We obviously did the sites in Jerusalem. And then we went up to Galilee and we had a great time. It was a little bit of a rainy day. But my son, I had him lay down in what we thought was the tank battle position so we could see what the fields of fire must’ve looked like. It was a lot of fun. I was out there with my old cadet maps walking that hallowed terrain, the important terrain, that allowed Israel to protect itself against the Arabs and those two big challenges to the rightful Jewish homeland. So that’s the first time I went. It was a fantastic trip. And my son, to this day, says it’s the best trip we ever took him on.

ROSENBERG: How fascinating. I can’t believe I never asked you that question. It’s such a basic question. I ask everybody. But somehow, you and I got into so many other issues very quickly in our friendship. So, then, just rounding out this portion of our interview, as Secretary, what was the most significant trip that you made here and why?

POMPEO: I don’t know that there was a singular trip that stood out from any other. But the work that we did over the course of the four years – it wasn’t just that we moved our embassy – there were so many other important decisions we took. We changed the rules about what passports could say [Editor’s note: those Americans born in Jerusalem can now have “Israel” listed in their passport as their birthplace.] The State Department, under my leadership, made the clear declaration that not every settlement [in Judea and Samaria, i.e., the “West Bank”] was necessarily unlawful. We recognized the Golan Heights [as sovereign Israeli territory] as well. These were these pieces and parts of the work that we did. And then we began to work to counter Iran. And we worked to try to convince the Palestinian Authority to come to terms with Israel. When it wouldn’t, we didn’t let that stand in the way of increasing peace and prosperity and reducing risk for Israel and reducing risk for the United States of America, as well. And the Abraham Accords were the result of that.

ROSENBERG: Really extraordinary. And in the conversation we will have in our next interview, we’ll talk about the next steps needed to advance the Abraham Accords. I want to commend you and obviously the president and vice president and the whole Middle East peace team, because almost everybody in Washington where you are right now – the swamp – everybody said – the “peace industry” said – that if you don’t make peace with the Palestinians, you cannot – cannot – make peace with anybody else. But you guys really “flipped that script” – that’s the line you used with me once. I want to thank you for that. Are you coming back any time soon, now that our country has been reopened for business?

ROSENBERG: We look forward to welcoming you. Secretary Mike Pompeo, thank you for joining us on this new series, “Why I Love Israel.”