Top Posts
Knowing the One Who Always Keeps His Word
Pregnancy Resource Centers Fight For Life Amidst Opposition
This World is Not Our Home
Lessons Learned From a Gingerbread House
Let There Be Peace on Earth
‘I Wanna Dance’ movie: Whitney Houston’s success and...
Fact Finding, Sight Seeing, and Prayer Walking
Kidney donation led to 8 life-saving surgeries
The Power of Curiosity
When Love Came Down at Christmas
Home Tags Posts tagged with "military" 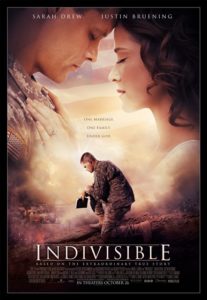 MOUNT HERMON, CA (ANS – October 19, 2018) – Could your marriage or romance survive the stresses that this film portrays?

Any relationship has its struggles, but military families face significant and sometimes unique tensions.  Lengthy separation.  Difficulty maintaining personal contact during deployment.  Death and injury.  Battlefield trauma and PTSD at home.  It’s enough to drive a wedge between the closest of partners.

Indivisible tackles these challenges candidly.  Not shy about combat, not sugarcoated about marriage, not syrupy about faith, it’s the poignant saga of a U.S. Army chaplain sent to encourage the troops at war who learns he needs encouragement himself.  It will touch hearts and minds. 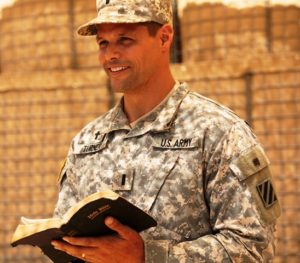 Chaplain Darren Turner (Justin Bruening) speaks to troops before a patrol.
Photo courtesy of © 2018 Provident Films and The WTA Group.
All rights reserved.

Darren (Bruening) has his heart set on serving his nation and helping soldiers through difficult battle circumstances.  He brings empathy, optimism and faith to his battalion: talking with members who see a longtime teammate killed, seeking to answer their hard questions:  If I die here, who will take care of my family?  How could a good God allow an innocent young girl – whose wish was to be closer to him – to be killed? 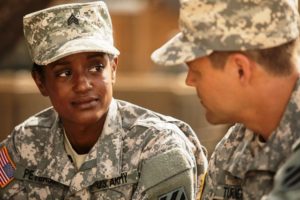 Soldiers’ openness varies.  A single mom feels she’s an unworthy mother and doesn’t know how to be a good one, but eventually wants to be.  A hardened veteran resists Darren’s attempts at friendship, warning the chaplain not to discuss his rocky marriage.

Back at home, Heather (Drew) diligently raises their three young kids while volunteering as a support resource for other military spouses.  She organizes Christmas stocking stuffers for the troops, and comforts brides who get the dreaded knock on the door. 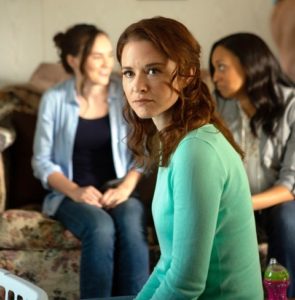 “The heart of Indivisible is about marriage,” explains Drew, who also executive produced. “The military is the setting through which we tell a story about what it means to fight hard for the vows you make on that day you stand before God and before your community and say, ‘I will love you for better or worse.'”

At Easter, Darren helps fellow soldiers appreciate that the biblical God who would sacrifice his Son can be trusted to have our backs.  His assertion reminded me of the biblical affirmation, “If God is for us, who can ever be against us? Since he did not spare even his own Son but gave him up for us all, won’t he also give us everything else?”

But an ambush, live combat, and assorted conflicts make Darren question his own teaching and faith.  He returns home callous and closed, angry and mean.  His marriage seems about to split. 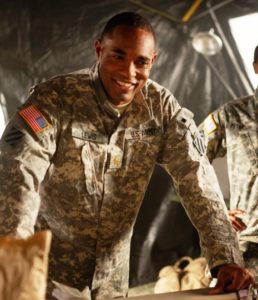 My only military experience is a year of Naval ROTC, until my career plans changed, so I cannot personally speak to the stress of live combat.  But I’ve been divorced and widowed and know plenty about marital conflict, bereavement’s pain, and confusion about God.  Indivisible hits the right buttons to help folks who’ve experienced any kind of relationship conflict and/or loss to find hope.

In fact, providing hope is a major aim.  Drew notes, “I believe this film has the ability to bring healing to people’s marriages, to people’s family lives…. It offers hope to people who are feeling like there is no hope. I think everyone who sees the film – men and women – is going to really be rooting for this family.”