Top Posts
Knowing the One Who Always Keeps His Word
Pregnancy Resource Centers Fight For Life Amidst Opposition
This World is Not Our Home
Lessons Learned From a Gingerbread House
Let There Be Peace on Earth
‘I Wanna Dance’ movie: Whitney Houston’s success and...
Fact Finding, Sight Seeing, and Prayer Walking
Kidney donation led to 8 life-saving surgeries
The Power of Curiosity
When Love Came Down at Christmas
Home Tags Posts tagged with "missionary killed with arrows"

John Chau, the missionary that gave his life to reach a remote tribe with the love of Christ, took every precaution to 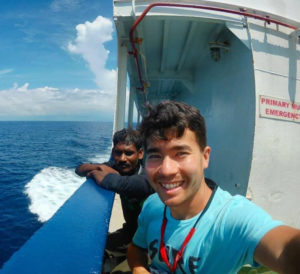 avoid any health dangers to them, including a self-imposed quarantine and 13 immunizations.

“He was wilderness EMT trained and was trained in health,” says Joshua Johnson, executive director of All Nations, the missions organization that supported Chau. “He took as many immunizations as he could before he went. He put himself in a self-imposed quarantine before he went. He did not want to endanger the tribe.”

Chau’s November 14, 2018 journal entry was written from a “safe house” in Port Blair, in the Andaman Islands, where he quarantined himself.

“I’ve been in a safe house in Port Blair since returning from Hut Bay, Little Andaman for the past eleven days!” Chau noted in his journal.

Then a cyclone in the Bay of Bengal caused further delays to his plan. “Being stuck in the safe house meant that I hadn’t seen any full sunlight till today…the benefit is that I was essentially in quarantine,” John Chau wrote.

In preparation to reach the Sentinelese, he spent much time in prayer and reading. He read The Lives of the Three Mrs. Judsons by Arabella Stuart, chronicling the sacrifices made by the wives of Adoniram Judson, who brought the Gospel to Burma (Myanmar).

Chau was inspired by the way the Judsons overcame hardships in their pioneering effort, which he contrasted with the harm caused by British colonialists, “who failed to be a blessing to the nations and rejected the commands of Jesus.”

The 26-year-old missionary overflowed with gratitude about the privilege of undertaking his mission. “God, I thank you for choosing me before I was even yet formed in my mother’s womb, to be Your messenger of Your Good news to the people of North Sentinel Island.”

He thought God would use his multi-ethnic background. “Even my heritage points to you – me, an American citizen, part Irish, part Native American (Choctaw), part African, and part Chinese and southeast Asian – thank You Father for using me, for shaping me and molding me to be Your ambassador.

“Please continue to keep all of us indeed hidden from the physical and spiritual forces who desire to keep the people here in darkness. Holy Spirit please open the hearts of the tribe to receive me and by receiving me, to receive You. May Your kingdom, Your rule, and reign come now to North Sentinel Island. My life is in your hands, O Father, so into Your hands, I commit my Spirit.”

Chau firmly believed that God’s plan to reach the Sentinelese will ultimately be accomplished. “His plan will succeed and I pray that not my will nor my plan be done but only His good, pleasing and perfect will. Forever You Jesus, are to be praised,” he wrote, before his departure for the island at 8 pm on the 14th in the company of fishermen.

Their boat reached North Sentinel Island by 10:30 pm, but motored away from other boat lights in the distance. “All along the way our boat was highlighted by bioluminescent plankton – and as fish jumped nearby we could see them like dancing mermaids shimmering along,” he wrote.

“The Milky Way was above and God himself was shielding us from the Coast Guard and Navy patrols.” At 4:30 am on November 15th, they entered a cove on the western shore. Chau and two men jumped into the shallow water and unloaded two pelican plastic containers and a kayak.

Chau spotted a Sentinel Islander house about 400 yards away and waited for someone to emerge. By 8:30 am, he tried initiating contact. Chau got two large fish from the boat and placed them on top of the kayak and began waving to the house, while he stood atop dead coral in four feet of water. He could hear the sound of women’s voices in the distance.

Then suddenly, two armed Sentinelese men came rushing toward him, yelling. “They had two arrows each, unstrung, until they got closer.”

“My name is John,” he called out. “I love you and Jesus loves you. Jesus Christ gave me authority to come to you. Here is some fish!”

Fear momentarily overtook Chau as he recognized the men’s hostile intent. “I regret I began to panic slightly as I saw them string arrows in their bows. He threw the fish toward them, but the men kept running and were almost within arrow range.