Top Posts
There’s A Light That Enters Houses With No...
Knowing the One Who Always Keeps His Word
Pregnancy Resource Centers Fight For Life Amidst Opposition
This World is Not Our Home
Lessons Learned From a Gingerbread House
Let There Be Peace on Earth
‘I Wanna Dance’ movie: Whitney Houston’s success and...
Fact Finding, Sight Seeing, and Prayer Walking
Kidney donation led to 8 life-saving surgeries
The Power of Curiosity
Home Tags Posts tagged with "Modernday Hymnwriters"

As part of the annual Getty Music Worship Conference: Sing! 2019, more than 9,000 people will gather in Belfast, before the tour continues to another 30 arena events across the USA and selected European countries over the next three years. 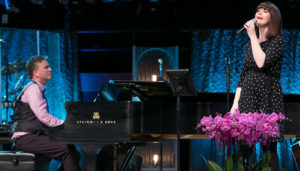 The Gettys on stage

The first arena event will be hosted this Saturday June 15 and will feature performances from Keith and Kristyn, alongside a 1,000-voice choir and band of virtuosic instrumentalists. The arena events will be set in-the-round and will see a fusion of Celtic, Bluegrass, Americana, Modern and Classical music along with cultural dance, and will also include a special message from best-selling author John Piper.

Following the Belfast evening, the tour will travel to Nashville’s Bridgestone Arena — the city where the Sing! initiative was launched in August 2017 with their first conference and launch of their book Sing!.

The Getty’s vision for seeing the church engage in congregational singing, theology and music and the arts has seen thousands of visitors since its launch. The Sing! conferences have become some of the most popular worship and theology events of the year, and the arena tour hopes to take their vision to the next level.

Keith Getty OBE said: “We are so excited to host our very first arena tour are thrilled to begin our journey in Belfast and Nashville — our two cities we call home.

“The concerts are a unique part of our vision and stand out from other modern Christian conferences. The events will include a 1000-person choir, which is going to be electric and will be an extraordinary place to engage in singing the hymns of the faith. For the thousands of people attending the arena events, we hope they will help them rediscover the power of congregational singing.”

Getty continued: “The Sing! Initiative began as a celebration of 500 years since Martin Luther brought the church back to congregational singing. We share his passion that theology should be sung, and so through this arena tour we want to celebrate how worship transforms individuals, families and strengthen and encourage congregational singing across our churches.”

To learn more about the upcoming Bridgestone Arena event in Nashville or the Sing! initiative please visit www.gettymusicworshipconference.com

In 2017, Keith Getty was made an “Officer of the Order of the British Empire” (OBE) by Queen Elizabeth II for his contribution to “music and modern hymn writing,” marking the first time the award had been given to an individual involved in the world of contemporary church music.

Keith and Kristyn Getty are the authors of “Sing! How Worship Transforms Your Life, Family, and Church,” published in 2017 by B&H Publishing Group.

The author of this story, Michael Ireland, is a self-supported media missionary with ANS. Click here to support him as a missionary journalist.
June 13, 2019
FacebookTwitterPinterestEmail