Top Posts
Pregnancy Resource Centers Fight For Life Amidst Opposition
This World is Not Our Home
Lessons Learned From a Gingerbread House
Let There Be Peace on Earth
‘I Wanna Dance’ movie: Whitney Houston’s success and...
Fact Finding, Sight Seeing, and Prayer Walking
Kidney donation led to 8 life-saving surgeries
The Power of Curiosity
When Love Came Down at Christmas
A Walk of Faith Begins with a Step...
Home Tags Posts tagged with "Mohammed bin Salman" 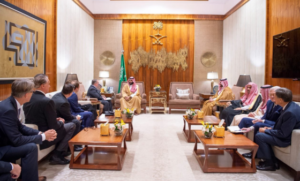 HRH Crown Prince Meets with a Delegation of American Evangelical Christian Leaders, currently on a visit to the Kingdom as part of a tour of the region (Photo Credit, SPA, 23-02-1440 AH).

Riyadh, Saudi Arabia, November 1, 2018 – to engage in dialogue regarding his vision for the Kingdom and the region.

Following the meeting in Riyadh, the delegation issued a joint statement:

“We were pleased by the invitation extended to us more than two months ago by the Kingdom of Saudi Arabia. It was an historic moment for the Saudi Crown Prince to openly welcome Evangelical Christian leaders to the Palace. We were encouraged by the candor of the two-hour conversation with him today. We discussed his ‘Vision 2030’ plan, the region, Islam and Christianity. Without question, this is a season of tremendous change in the Middle East, and therefore we have been grateful for the opportunity to meet in-person with key Arab leaders to understand their goals and to ask direct questions. We look forward to building upon these relationships and continuing the dialogue.” 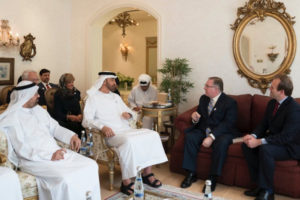