Top Posts
Pregnancy Resource Centers Fight For Life Amidst Opposition
This World is Not Our Home
Lessons Learned From a Gingerbread House
Let There Be Peace on Earth
‘I Wanna Dance’ movie: Whitney Houston’s success and...
Fact Finding, Sight Seeing, and Prayer Walking
Kidney donation led to 8 life-saving surgeries
The Power of Curiosity
When Love Came Down at Christmas
A Walk of Faith Begins with a Step...
Home Tags Posts tagged with "Monsoon Flooding"

WILLS POINT, TEXAS (ANS) — While the Chennai state is plagued by drought, other parts of India, Nepal, and Bangladesh are enduring the annual monsoon season. Many are fleeing their homes and villages for safer ground.

According to Gospel For Asia, by July 23, in Bangladesh alone, over 700,000 people had been displaced. More than a million people across the three countries have been forced to seek refuge elsewhere, and more than 120 people had been reported missing. Another 300 had died. 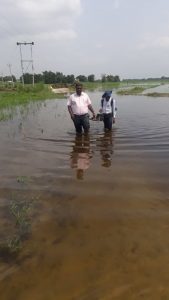 Four days later, India Today reported the death toll at 600 people, 93 of whom were children. More than 25 million had been affected by the flooding. UNICEF reported damage at more than 2,000 schools in the state of Assam alone. The Hindu reported more than 367,000 houses damaged or destroyed in Bangladesh alone.

GFA says that access to many of the affected areas is either limited or impossible at the moment. In the meantime, emergency teams are being readied to enter the region to help stave off malnutrition and to provide shelter and medical aid.

GFA-supported workers, churches, and church members have not been exempted. Field reports indicate flooding across a 500-km stretch of northeastern India in the states of Bihar and Uttar Pradesh that border Nepal and Bangladesh. At least a dozen GFA-supported churches are either surrounded by floodwaters or have suffered damage from the flooding.

Another supported church in Nepal is in a village that is currently three feet underwater. Local pastors are reporting that many people there and in many other communities have lost their homes and all their earthly goods.

The International Federation of Red Cross and Red Crescent Societies issued an in-depth report on July 30 that indicated that more than 50,000 tube wells have been damaged and many other drinking water sources have been contaminated.

Gospel for Asia requests prayers for the Lord’s gracious protection and provision for the people affected by the flooding, and for relief efforts to be able to reach them with necessary shelter and supplies.

Celebrating its 40th anniversary in 2019, Gospel for Asia (GFA, www.gfa.org ) is a leading faith-based mission agency, bringing vital assistance and spiritual hope to millions across Asia, especially to those who have yet to hear the ”good news” of Jesus Christ.

In their latest yearly report, this included more than 70,000 sponsored children, free medical camps conducted in more than 1,200 villages and remote communities, over 4,000 clean water wells drilled, over 11,000 water filters installed, income-generating Christmas gifts for more than 200,000 needy families, and spiritual teaching available in 110 languages in 14 nations through radio ministry. For all the latest news, visit our Press Room at https://press.gfa.org/news.