Top Posts
Colorado football coach Sanders’ unabashed faith
There’s A Light That Enters Houses With No...
Knowing the One Who Always Keeps His Word
Pregnancy Resource Centers Fight For Life Amidst Opposition
This World is Not Our Home
Lessons Learned From a Gingerbread House
Let There Be Peace on Earth
‘I Wanna Dance’ movie: Whitney Houston’s success and...
Fact Finding, Sight Seeing, and Prayer Walking
Kidney donation led to 8 life-saving surgeries
Home Tags Posts tagged with "Mosul, Iraq"

The Islamic State’s three-year occupation of the northern Iraqi city of Mosul and its surrounding villages ended nearly two years ago, yet the city and its diminished number of Christian residents remain vulnerable.

Last month the Iraqi government announced it would arm residents of 50 villages around Mosul, Iraq’s second-largest city, so they could protect themselves against pockets of IS fighters that continue to be active in the country, according to World Watch Monitor. 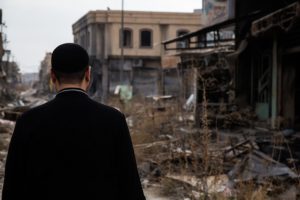 A resident looks out over the market in Bartella

They appear to have adopted a ‘hit-and-run’ approach, attacking local targets like a market in Kirkuk, 184km southeast of Mosul, with the aim to undermine the government in Baghdad. IS has also claimed responsibility for some of the fires that in recent weeks torched hundreds of acres of land in northern Iraq, destroying crops on land that the attackers say is “owned by infidels.”

Sectarian tensions that predate the IS occupation have raised their heads again. Iranian-backed militias, known as Popular Mobilization Forces, patrol the streets and sometimes control whole towns, as reported by the National Catholic Register.

The lack of security and stability makes Christians hesitate to return to their homes and communities. Since the toppling of Saddam Hussein in 2003, the number of Christians in Iraq — between 1.4 million and 2 million — has decreased. Precise numbers are hard to come by, but estimates of the Christians left in Iraq range from 200,000 to 250,000.

“Christianity in Iraq, one of the oldest Churches, if not the oldest Church in the world, is perilously close to extinction,” the Rt. Rev. Bashar Warda told Christian leaders during a visit to the United Kingdom last month.  After 1,400 years of persecution, Iraq’s Christians may have come to the end of the road, he said.

Christians who decide to return face many challenges. Houses and infrastructure have been destroyed and there is the constant fear of possible attacks from the IS cells or sectarian militias.

Salim Harihosan, a Christian resident, told AP he regretted coming back to his hometown, Bartella, 23km east of Mosul. Although his house has been rebuilt with the help of an NGO, he feels unsafe. “It is a psychological situation… I go to the market and I hear things, that maybe this or that happened,” he said. “These things play with the mind of the person living here.”

Once a predominantly Syriac Christian town before the IS occupation, Bartella now is majority Shiite Muslim and is controlled by a militia dominated by the ethnic Shabak. Citizens have reported incidents of harassment and intimidation.

The Shabak representative in parliament in Baghdad, Qusay Abbas, told AP that these were “individual incidents” and did not represent the position of the group towards the Christians.

Iqbal Shino, a Christian woman who returned to Bartella in 2017, told the news agency she was sexually harassed by a Shabak member. She initially filed a complaint with the police but later withdrew it for fear of retribution.

Christian charities Open Doors, Served, and Middle East Concern have advocated for an “accountability mechanism” to deal with incidents of religious and ethnic persecution and discrimination in Iraq and Syria, to ensure the future safety and security of Christians in the region. The countries are 13th and 11th , respectively, on the Open Doors’ 2019 World Watch List of nations where it is most difficult to live as a Christian.

A new legal center is trying to educate the Christian minority in the Nineveh region about their rights. A four-person legal team, including a judge and a lawyer, work on registering and advocating for cases in which land and homes of Christians are repossessed, where they are denied access to public services like education, and in which women are denied rights.

“We see this initiative in Iraq as one of the most important projects to ensure the equal rights of Christians in Iraq”, an Open Doors spokesperson said. “We invest in it because we believe in the importance of raising the local capacity of local Christians to defend their rights. It is also crucial that we don’t only help in rebuilding Christian towns and villages, but more importantly help secure a legal framework in which their rights and future are protected”.

Other efforts to restore a sense of normalcy are less formal. In Mosul, youth from the Christian, Yazidi and Shabak communities in the Nineveh Plain region handed out white roses and sweets to Muslims on June 5 during Eid-al Fitr, the celebration that closes the fasting season of Ramadan. The Catholic news agency Fides reported that the gesture, organized by Italian association “Un Ponte per …,” was meant as a small taste of a future where “every person can follow their own religious beliefs and express it freely, with respect and friendship, sharing traditions and happy moments.”

The author of this story, Michael Ireland, is a self-supported media missionary with ANS. Click here to support him as a missionary journalist.
June 11, 2019
FacebookTwitterPinterestEmail