Top Posts
Colorado football coach Sanders’ unabashed faith
There’s A Light That Enters Houses With No...
Knowing the One Who Always Keeps His Word
Pregnancy Resource Centers Fight For Life Amidst Opposition
This World is Not Our Home
Lessons Learned From a Gingerbread House
Let There Be Peace on Earth
‘I Wanna Dance’ movie: Whitney Houston’s success and...
Fact Finding, Sight Seeing, and Prayer Walking
Kidney donation led to 8 life-saving surgeries
Home Tags Posts tagged with "MOSUL"

WASHINGTON D.C. (ANS) — Although the reconstruction of Mosul is slow, following its three-year occupation by the Islamic State (ISIS), the city’s bustling university provides hope for the future, writes Claire Evans for International Christian Concern (ICC).

Many of the students commute into the city and their presence symbolizes the possibility of a future for areas in the Nineveh Plains once devastated by ISIS, Evans said in a recent ICC ministry update.

“So when Mina Ragheed, a blind Christian woman and recent graduate from Mosul University, was offered and later denied a government appointment as a teacher, Christians were outraged,” Evans said.

Displacement had shattered the hopes of many Christians for a future.

“Mina not only had a bright future, but she also had successfully risen above the challenges of both her disability and displacement. Her academic success had surprised and inspired many,” Evans writes.

“Mina over the years was clever, even during the displacement,” said the head of Mosul University. “I’ve noticed that Mina still has the same seriousness as she did four years ago, when I met her for the first time in Mosul.” 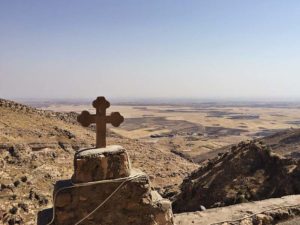 Evans recounts that Mina’s dedication to her education was instilled within her at a young age through the involvement of family and friends. Her mother recalled, “We lived normally. I didn’t even consider she had a disability. I was always encouraging her and took care of her. I used to read while she listens. When she [entered] the 10th stage, we started using cell phones to record the lectures. I used to make her review and refresh her memory whenever she had an examination.”

Mina’s parents’ insistence on enforcing her studies encouraged her to exceed beyond their expectations. “My parents did not expect me to be in school like the others, because it is too hard for someone to study and graduate with these kind of circumstances,” Mina said. “But I joined school and graduated from primary and secondary school. I used to have a friend who gave me a copy of everything she writes at each class.”

When Mina began attending the university, her aptitude quickly became apparent to all of the teachers. Although she was blind, she would see details that no other students would notice. It was no surprise to them that she would score the highest graduate marks in the university’s history. Mina, however, could not believe it. “When I got the marks, and the woman told me that I got the highest marks and I am the first, I couldn’t believe it, it was amazing! I remembered Mosul and my university there.”

“When I got the marks, and the woman told me that I got the highest marks and I am the first, I couldn’t believe it, it was amazing! I remembered Mosul and my university there.”

Congratulations poured in from across Iraq, said Evans, and last month the government even offered Mina an appointed position. However, that’s when things began to go wrong.

The job was hers, but Mina first had to obtain a certificate from the Ministry of Health and Environment which stated that there were no medical concerns which would prevent her from fulfilling her job responsibilities.

“To the shock of all, the Ministry refused to issue the certificate, denying her the well-deserved job opportunity,” Evans reported.

Mina’s outstanding academic record clearly demonstrated that she possessed all of the skills necessary in order to fulfill her job, leaving many local believers to conclude that it was a veiled attempt to prevent Christians from obtaining government appointments. The outcry among Christians was fierce.

The cabinet had decided to appoint Mina “with distinction, but the medical committee, after the medical examination, cancelled the appointment because she was blind. Mina has an exception from the Council of Ministers because she is the first in the University of Mosul,” explained the Syriac Orthodox Archbishop, Mar Nicodemus Daoud Sharaf.

He continued, “We will never be silent about this right, even if our lives cost us. And we will announce to the world that Christians suffer from persecution and arbitrariness.”

The uproar of Iraq’s Christians in support of Mina was a huge encouragement to her, and also led to positive change. Because of the vast outcry, the Ministry of Health lifted their block on her appointment. “My goal was to deliver my voice so that future situations would benefit, and their treatment would be different from the treatment I received,” said Mina.

Evans concludes: “Her victory has provided an optimistic hope for many Christians that a future is possible in Iraq. That ISIS did not destroy everything. That students can seek a future they’ve long desired. And that life can be rebuilt into something even better than before.”