Top Posts
There’s A Light That Enters Houses With No...
Knowing the One Who Always Keeps His Word
Pregnancy Resource Centers Fight For Life Amidst Opposition
This World is Not Our Home
Lessons Learned From a Gingerbread House
Let There Be Peace on Earth
‘I Wanna Dance’ movie: Whitney Houston’s success and...
Fact Finding, Sight Seeing, and Prayer Walking
Kidney donation led to 8 life-saving surgeries
The Power of Curiosity
Home Tags Posts tagged with "Multi-Faith Targeted Violence in the U.S. Round-table."

WASHINGTON, D.C. (ANS) — The U.S. Federal Bureau of Investigation in Washington, DC on June 18, hosted a Multi-Faith Targeted Violence in the U.S. Round-table.

The ‘By-Invitation-Only’ meeting included a closed door security briefing followed by a panel discussion with representatives from the Department of Homeland Security, FBI, Federal, State and Local law enforcement, and representatives from national faith organizations responsible for security efforts involving houses of worship and faith-based facilities. 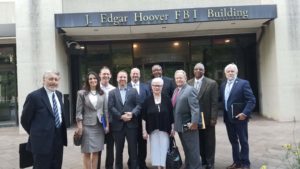 CEN Founder and President, Mary Marr told reporters: “National Christian leaders from denominations, universities, schools, city networks, and media all came together today in what was a sober, yet historic, meeting.

“he critical mass of the Christian community nationwide came together to discuss a topic weighing on all our hearts: How do we best protect and defend the Church for such a time as this while extending the welcoming Hand of Christ?”

According to CEN, the participants were provided an in-depth and up-to-date assessment of the current threat environment with an emphasis on pre-incident indicators that may inform prevention efforts.

Marr told ASSIST News: “They had the opportunity to candidly hear from each other and discuss common challenges confronting faith-based organizations responsible for addressing the security concerns arising from escalating attacks. Participants agreed an attack on one religion is an attack on all!”

She added: “Incidents such as Sutherland Springs, TX, Pittsburgh, PA, Oak Creek, WI and Poway, CA have much in common as each of the major faith groups have faced the heartbreak, loss, chaos and confusion brought on by a mass casualty attack.

“These recent attacks were carefully examined by the participants to determine incident mitigation best practices such as how to respond to survivors; how to best work within your local community to build resiliency; what to expect from law enforcement; and how to take advantage of the services available for faith communities to detect, prevent, and protect against acts of violence targeting houses of worship.”

Marr concluded: “We agreed as national Christian leaders, like Nehemiah, it is time to come together and rebuild our temple bringing calm where there is distress; offering peaceful solutions where there is discord; and bringing a moral and ethical compass back into our national discourse through Our Lord and Savior Jesus Christ.”

In preparation for the Multi-Faith Targeted Violence Round-table CEN conducted its own survey of the nation’s approximately 50 Christian Safety Security training and information sharing ministries. Of the 38 responders the results were staggering.

Christian Security Survey Report June, 2019 — How ready are we?

85% Believe churches are at greater risk because of the increasing number of congregants with violent unstable family members and when they are providing counseling or ministerial support.

88% Believe active shooter training should provide some simple offensive tactics for those whose only option is to fight for survival.

67% Believe churches are not taking advantage of the resources which are available to them through local trained individuals, security ministries, or federal, state and local law enforcement.

81% Believe there is uncertainty surrounding the definitions and laws related to hate crimes.

97% Believe churches are not immune from mass casualty incidents.

70% Believe the See Something Say Something campaign lacks clarity for people to respond.

Marr stated: “In these countless mass casualty incidents recently, we have been reminded that any security response is more than law enforcement alone. Rather, there is a role for everyone in the process of prevention, response and mitigation.”

She asked: “Will you and your church effectively share the Hope of Christ when emergencies occur?”

To protect, defend, and guide the body of Christ for such a time as this CEN developed ReadyChristian, ReadyChurch and ReadyCity — three compatible self-study guides to prepare your congregants, your whole church including staff, and your Christian community to be there responsibly and obediently with the Hope of Christ in crisis.

Also included are Biblical practices such as: Embracing a Biblical Readiness Response vs helplessness, Focusing on those in need vs the crisis itself or mere survival, Applying authoritative Biblical collaboration vs authoritarian control, Using bottom up innovative leadership approaches vs top down, Believing we are stronger together with Christ vs separately.

The author of this story, Michael Ireland, is a self-supported media missionary with ANS. Click here to support him as a missionary journalist.
June 19, 2019
FacebookTwitterPinterestEmail