Top Posts
Knowing the One Who Always Keeps His Word
Pregnancy Resource Centers Fight For Life Amidst Opposition
This World is Not Our Home
Lessons Learned From a Gingerbread House
Let There Be Peace on Earth
‘I Wanna Dance’ movie: Whitney Houston’s success and...
Fact Finding, Sight Seeing, and Prayer Walking
Kidney donation led to 8 life-saving surgeries
The Power of Curiosity
When Love Came Down at Christmas
Home Tags Posts tagged with "Musician Chris Pick"

MORELAND, PA(ANS) — Trina was first diagnosed with cancer in 2019. She began experiencing breathing problems and after several doctor visits and testing she was diagnosed with a very rare form of cancer called Mucoepidermoid Carcinoma.

“She had a mass pressing on her trachea which was causing breathing difficulties and another mass in her lower right lung. Neither were surgically removable,” said her friend singer/songwriter Chris Pick.

In a fight for her life, Trina and her husband Shane made a trip to Arizona, to Envita for extensive testing and treatment, which insurance didn’t cover. 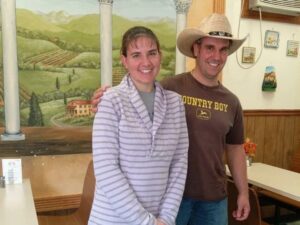 “Benefits were held for Trina to help with costs,” said Pick, adding, “And I put together two benefit concerts with the help of my friends in the music business (Mariah Hostrander, John Roginski & Paul Venturi of The Monkeephiles, Marielle Brown, and Ragamuffin Mitch McVicker).”

Pick first met Trina many years ago in Dallas while getting ready to board a plane to India.

“We both served in a ministry to the people in India, but had never met. And shockingly we actually lived an hour’s drive apart. In India she told me she and her husband Shane were going to adopt children from Africa because they found they couldn’t have children,” Pick said.

Both worked with Gospel For Asia, which supports national missionaries throughout Asia, and they did several presentations together at Christian music festivals in Pennsylvania.

“About a year or two later after our India trip, my wife Michelle and I were helping Trina and Shane at Creation Fest with GFA and that’s when we discovered she was pregnant. Then came the blessing of another child.”

Pick’s involvement over the years with the late Davy Jones of The Monkees connected him with Trina’s in-laws.

“Shane’s parents live in Beavertown, where Davy lived since the mid-80s,” Pick explained. “One day I get a message from a Monkee fan in Beavertown who said I knew her son and daughter-in-law. Funny how God puts these connections in our lives!”

Besides Jones, Pick has also worked in the studio with producer, Christian artist, and Ragamuffin Band founding member Rick Elias.

“Rick produced my 2010 Christmas EP and my 2011 EP ‘Tragedies & Miracles,’ ” Pick explaines. “We even used early Ragamuffin band members on the project.

“Last year, Rick was diagnosed with terminal brain cancer. A benefit was held for him in Nashville in which Rick (along with the original Rags, Amy Grant, Michael W. Smith, etc.) performed the original 1998 ‘Jesus Record.’ Mitch McVicker and I were both there. Shortly after, I told Mitch about Trina and his heart sunk. He got involved with me to help Trina.”

McVicker attended Friends University in Wichita, Kansas, in the early-1990s where he met and befriended the late CCM recording artist, Rich Mullins. After graduating in May 1995, McVicker moved to New Mexico, eventually touring and writing songs with Mullins.

With Mullins and song collaborator Beaker, McVicker co-wrote the musical, The Canticle of the Plains, which is based on the life and teachings of Saint Francis of Assisi.

Besides missionary work and supporting national missionaries in Southeast Asia, Trina and Shane (like Pick and his wife, Michelle) were voices for the Persecuted Church.

“Trina definitely showed all three Persons were at work within her. God says He is a father to the fatherless, and Trina became a mother to the motherless when she and Shane chose to adopt two children. Like Jesus, she was always led by the Spirit in her life. She was passionate about making Christ known! In His earthly ministry (even in His suffering and dying) Jesus always gave glory to His Father. Trina likewise always gave glory to God — even in the midst of her own suffering. The Bible declares that God is love. And anyone who knew Trina knew that she loved. As her family had said, ‘she would never let anyone go without a goodbye hug’”

This became the focus behind a song Pick write for Trina, “To show how much Trina glorified God and to give all glory to God!”

Pick said: “I love this picture of Trina on the cover of the single. We were in India walking through the streets of Kolkata, somewhere near a leper colony. Children were drawn to her. She reminded me of Mother Teresa or Amy Carmichael as children clung to her. She loved children, and seeing them suffer just broke her heart. One child gave her some flowers and she asked me to take a picture of her with the flowers.”

Pick said Trina’s love for her family was the reason she fought so hard when she was diagnosed with cancer.

In one of her last posts on Facebook, Trina ended with these words: “I want to thank everyone immensely for all you’ve done for my family and I these past almost two and a half years. Thank you for your prayers, cards, words of encouragement, gifts, financial help, meals etc., it has all been a huge blessing. “Please, those of you who have prayed for me, I ask that with that same eagerness you would pray for the church to love Christ and for the persecuted church…. I pray no matter what happens, life or death, I would bring glory to God and that others would come to know Jesus through this. I love you all!”

Trina Eia went to be with her Lord and Savior on April 18, 2021. “I wrote this song to help keep her legacy alive and bring comfort to her family and friends. And in some way bring some peace and comfort to me,” Pick said.

Since Trina loved children, Pick is donating all proceeds he makes from this single on Bandcamp to St. Jude’s Children’s Research Hospital. http://www.stjude.org

The single became available on iTunes, iHeartRadio, Amazon, Spotify, etc. on April 23rd. All proceeds from these sites will go directly to the Health Well Foundation (www.healthwellfoundation.org ) in order to help cancer patients who are in need of financial help for treatment.