Top Posts
Knowing the One Who Always Keeps His Word
Pregnancy Resource Centers Fight For Life Amidst Opposition
This World is Not Our Home
Lessons Learned From a Gingerbread House
Let There Be Peace on Earth
‘I Wanna Dance’ movie: Whitney Houston’s success and...
Fact Finding, Sight Seeing, and Prayer Walking
Kidney donation led to 8 life-saving surgeries
The Power of Curiosity
When Love Came Down at Christmas
Home Tags Posts tagged with "Muslim" 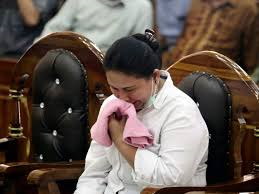 Meilana, the 44-year-old Chinese woman was seen bursting in tears after hearing she would go to prison for blasphemy against Islam.

JAKARTA, INDONESIA (ANS-September 11, 2918)– Religious leaders in Indonesia’s North Sumatra province have reportedly agreed to stop protesting the prison term given to a local Buddhist woman for allegedly insulting Islam. Meiliana, a 44-year-old ethnic Chinese woman, had complained the Muslim call to prayer,  repeated five times a day, was being played too loudly at the mosque near her house in the port town of Tanjung Balai in North Sumatra.

Officials of Christian, Buddhist, and Hindu communities were among those attending a ceremony where religious leaders signed “a peace pact” with authorities aimed at easing tensions over Meiliana’s 18-month prison sentence, The Jakarta Post newspaper said.

The event was organized by local police, apparently to avoid new clashes. In July 2016, Muslim mobs burned and ransacked at least 14 Buddhist temples throughout Tanjung Balai after reports of Meiliana’s complaint about a mosque’s noisy loudspeakers

“Buddhists here don’t question the [August 21, 2018] verdict anymore. We want to live peacefully in Tanjung Balai,” local Buddhist leader Tjoa Kien Lie was quoted as saying. “As law-abiding Indonesians, we have to respect the judge’s decision. It doesn’t need to be debated because it could divide us,” he told The Jakarta Post after the peace pact was signed.

His comments came despite mounting national and international concern about the fairness of the trial. Investigators of Indonesia’s Corruption Eradication Commission reportedly detained the judge presiding over Meiliana’s case for allegedly taking bribes while serving at the court.

The secretary general of the Pentecostal Church in Indonesia or ‘Gereja Pantekosta di Indonesia’ (GPdI) also criticized the sentencing. “There is much injustice in Indonesia,” said the official, Johannis (‘John’) Hus Lumenta.

Usman Hamid, Amnesty International Indonesia’s executive director, agrees. “Making a complaint about noise is not a criminal offense. This ludicrous decision is a flagrant violation of freedom of expression,” Hamid added in published remarks.

But a conservative group, Islamic Community Forum, complained that Meiliana’s sentence was too light as the maximum sentence for blasphemy is five years.

The case has underscored worries among Christians and other minorities about blasphemy laws, which were introduced in 1965. They were initially used eight times in the 40 years that followed until 2004, BosNewsLife learned. But in the decade after the election of Susilo Bambang Yudhoyono as president in late 2004, more than 100 people have been jailed for blasphemy, including more than a dozen under current President Joko “Jokowi” Widodo.