Top Posts
Pregnancy Resource Centers Fight For Life Amidst Opposition
This World is Not Our Home
Lessons Learned From a Gingerbread House
Let There Be Peace on Earth
‘I Wanna Dance’ movie: Whitney Houston’s success and...
Fact Finding, Sight Seeing, and Prayer Walking
Kidney donation led to 8 life-saving surgeries
The Power of Curiosity
When Love Came Down at Christmas
A Walk of Faith Begins with a Step...
Home Tags Posts tagged with "Nashville" 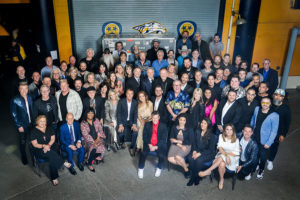 (Many of the artists gathered backstage before the concert.)

Michael W. Smith was honored for 35 years in the music industry with a star-studded concert—35 years of Friends: Celebrating The Music Of Michael W. Smith on Tuesday, April 30 at Bridgestone Arena in Nashville, Tennessee. The three-hour celebration featured many of the biggest names Christian, pop and country music as more than 50 artists paid tribute to Smith, his philanthropic work, and #1 songs.

Before the show, Smith spoke of how he had been kept in the dark about most of the event, but he said he was looking forward to the surprises throughout the night, seeing his songs performed and the renditions the artists were going to take on them.

“I think the beauty of this whole night is how it’s brought so many of us together, and most of them are my friends,” said Smith, backstage prior to the show.

Kathie Lee Gifford kicked off the evening by bringing Smith and his wife Deborah out to greet the crowd before they took seats on stage.

Smith joined several artists throughout the night for performances of many of his  best-loved songs and some of theirs.

The set list included many of Smith’s 35 #1 hits. A few of the highlights included: Phil Keaggy, Mac Powell, Phillips, Craig & Dean, Point of Grace performing “Agnus Dei,” Zach Williams rendition of “I’ll Stand,” as well as, performances by CeCe Winans with Point of Grace on “King of Glory,” Matt Maher’s rendition of “This is Your Time” and Wynonna’s performance of “Majesty.”

Other notable moments included Charlie Daniels with Smith on “The Devil Went Down to Georgia, ” Smith with his original band performing “Could He Be the Messiah,” “Be Strong,” and “You Need a Savior” and Amy Grant with Smith on piano on “Love Will Find a Way” and “Thy Word.” Former President George W. Bush, U2’s Bono and Franklin Graham also shared messages for Smith via video.

Needless to say, there were countless standing ovations throughout the evening. The show closed with all the artists on stage, joining-in on Smith’s  “Friends.” After playing the piano, Smith moved to the front of the stage for a bow, and he was joined by his family.

Michael W. Smith has earned 45 Dove awards, three Grammy awards, and an American Music award. He has been inducted into the Gospel Music Hall of Fame and has sold more than 15 million albums. AWAKEN: The Surrounded Experience, Smith’s latest release, came out earlier this year.

Smith has also given back to the global community. He has helped to raise funds to battle AIDS in Africa; started Rocketown, a safe haven for young people in Tennessee, and has helped more than 70,000 children through Compassion International. Additionally, Smith has written several best-selling books, including Old Enough To Know and Friends Are Friends Forever.

For the latest news and tour dates, go to www.michaelwsmith.com.