Top Posts
Colorado football coach Sanders’ unabashed faith
There’s A Light That Enters Houses With No...
Knowing the One Who Always Keeps His Word
Pregnancy Resource Centers Fight For Life Amidst Opposition
This World is Not Our Home
Lessons Learned From a Gingerbread House
Let There Be Peace on Earth
‘I Wanna Dance’ movie: Whitney Houston’s success and...
Fact Finding, Sight Seeing, and Prayer Walking
Kidney donation led to 8 life-saving surgeries
Home Tags Posts tagged with "National Religious Broadcasters Convention 2021"

GRAPEVINE, Texas (ANS) – On Tuesday morning (June 22), National Religious Broadcasters (NRB) hosted a forum on the human cost to denying religious freedom with Kristen Waggoner, Jack Phillips, and Dr. Jerry Davis at the NRB 2021 Covention in Grapevine, Texas. The session highlighted the importance of standing up for religious liberty and some of the difficulties of doing so in an increasingly secular world.

“What Americans have always done is to live, to fight, and even to die for the rights of others. Foremost among those is free speech and religious freedom,” Waggoner said. “And no one, not the government, not society, and certainly not a Twitter mob should be able to deny Americans those freedoms.”

Waggoner highlighted key individuals who have fought for their own religious freedom with the hope of inspiring others to stand with courage as they did.

“One person can make a difference for Christ and for the cause of freedom,” Waggoner said.

Among these individuals mentioned were Dr. Nicholas Meriwether, a philosophy professor at Shawnee State University in Ohio; Jack Denton, the president of the FSU Student Senate; and Sherrie Laurie, the director of the Downtown Hope Center in Anchorage, Alaska.

“A government that can destroy someone because it doesn’t like what they’re saying or what they believe has unlimited power,” Waggoner said. “Yes, it would be so much easier and so much more convenient to avoid the whole debate and to remain silent, but at what cost?” 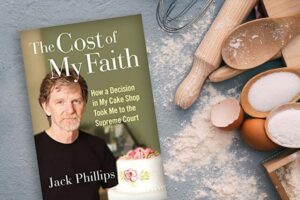 Cover artwork for The Cost of My Faith by Jack Phillips

According to the NRB report, Waggoner told the story of Jack Phillips, a cake artist and owner of Masterpiece Cakeshop in Colorado, who declined to create a custom wedding cake celebrating same-sex marriage in 2012. He politely declined their request because it violated his faith and conscience, but the couple decided to file a formal complaint with the Colorado Civil Rights Division, charging him with sexual orientation discrimination. In 2018, Phillips won his case before of the U.S. Supreme Court with a vote of 7-2.

Waggoner noted three principles which came out of this Supreme Court decision.

Following her talk and introductions, Dr. Jerry David, President of College of the Ozarks in Missouri, and Jack Phillips joined Waggoner on the stage for a panel discussion.

Phillips told the story of when he became a cake artist 27 years ago. In high school, he started working for a local bakery, and there he fell in love with the art of baking and design. He opened up his business Masterpiece Cakeshop 25 years ago and has since been creating beautiful cakes for customers in his community.

He told about the day that two men came into his store requesting a custom made cake to celebrate their same-sex marriage. Phillips respectfully declined and offered them other products in his store, but they decided to sue Phillips. This was not the first custom cake he had declined, but it was the first time that others had pushed back on his decision.

Phillips said that he wants his cakes and business to reflect his deeply rooted faith and won’t compromise his convictions along the way.

“I drew a line in the sand, and I knew I couldn’t cross it,” Phillips said. “It was a difficult decision, and I lost a lot of money. I was down to four employees…I got death threats for not creating a cake that was against my faith.”

Phillips continues to be heavily targeted and severely punished by the state of Colorado for his beliefs.

NRB reported that while the Supreme Court found favor with Philips, he’s now back in court “defending the right of creating professionals to choose the messages they create.”

Phillips wrote a book about his nine-year legal battle called “The Cost of My Faith: How a Decision in My Cake Shop Took Me to the Supreme Court.” He wrote it not only in order to document the truth of his case to his children and grandchildren, but also to serve as a platform to share his faith.

“If you use your platform to stand up for Jesus Christ, you really have nothing to lose,” Phillips said.

Dr. Jerry Davis, who has served at College of the Ozarks for 30 years, also spoke about his battle of defending religious freedom as president of the college. College of the Ozarks is suing the U.S. Department of Housing and Urban Development for a Biden Administration directive that would force College of the Ozarks, a private Christian college, to open up its sex-specific dorms and showers to members of the opposite.

“We think it’s illegal to put females in male dorm rooms and showers. We don’t need the government getting involved in dorm room assignments,” Davis said. “I’m for standing firm, but also for doing something…I don’t plan on backing up from that at all.”

In a time where many organizations are afraid to take a stand, Davis told attendees to “wake up.”

The College of the Ozarks case is currently at the 8th Circuit Court of Appeals.

The NRB is the world’s largest association of Christian communicators. Since 1944, they have worked to protect free speech and foster excellence in communication. For more information on the NRB visit nrb.org.