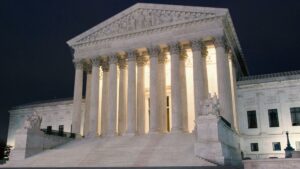 The justices told New York Governor Andrew Cuomo he can’t discriminate against religious groups when it comes to Covid-19 restrictions.

‘Even in a Pandemic, the Constitution Cannot Be Put Away & Forgotten’

The ruling said, “Members of this Court are not public health experts, and we should respect the judgment of those with special expertise and responsibility in this area. But even in a pandemic, the Constitution cannot be put away and forgotten. The restrictions at issue here, by effectively barring many from attending religious services, strike at the very heart of the First Amendment’s guarantee of religious liberty.”

The justices said the Covid-19 restrictions certainly aren’t neutral towards religion, “Because they single out houses of worship for especially harsh treatment.”

CBN News reported that while religious gatherings in a red zone are limited to 10 or fewer worshippers, the Court pointed out, “Businesses categorized as ‘essential’ may admit as many people as they wish.  And the list of ‘essential’ businesses includes things such as acupuncture facilities, campgrounds, garages, as well as many whose services are not limited to those that can be regarded as essential.”

In a concurrence, Justice Neal Gorsuch wrote, “It is time – past time – to make plain that, while the pandemic poses many grave challenges, there is no world in which the Constitution tolerates color-coded executive edicts that reopen liquor stores and bike shops but shutters churches, synagogues.”

‘Will Cause Irreparable Harm’

The Court ruled, “There can be no question that the challenged restrictions if enforced, will cause irreparable harm.”

CBN News said the justices acknowledged some worshippers could view services on television. But they wrote, “Such remote viewing is not the same as personal attendance.   Catholics who watch a Mass at home cannot receive communion, and there are important religious traditions in the Orthodox Jewish faith that require personal attendance.”

Goodrich pointed out the justices suggested, “New York could have tied attendance to the size of the building rather than imposing a hard cap.”

The ruling spoke about how most of the churches or synagogues involved in this case can seat at least 400 people, in a couple of cases, more than 1,000.

“It is hard to believe that admitting more than 10 people to a 1,000-seat church or 400-seat synagogue would create a more serious health risk than the many other activities that the State allows,” the ruling stated.

Becket senior counsel Eric Rassbach works with the Jewish plaintiffs in this case.   He said after the ruling, “Governor Cuomo should have known that openly targeting Jews for a special COVID crackdown was never going to be constitutional.  But treating synagogues and churches worse than the pet stores, liquor stores, and department stores also just didn’t make any sense.”

Rassbach added, “The Supreme Court was right to step in and allow Jews and Catholics to worship as they have for centuries.”

The Heritage Foundation’s Ryan T. Anderson, a leading defender of religious liberties, said on Twitter, “I’m thankful that we have a Supreme Court that won’t allow politicians to ignore the Constitution’s protections of religious liberty.”

“The Court sent a clear and important signal: a global pandemic does not give lawmakers license to discriminate on the basis of religion,” stated Ashley McGuire, senior fellow at The Catholic Association.

“How fitting that this injunction protecting the faithful comes on the day we celebrate those who first came to America in search of this basic freedom. Countless Americans whose right to worship has been unjustly curtailed by policy makers singling out churches during this pandemic have reason for an extra measure of gratitude today.”

“Today, as Americans gather around altars and dining room tables and give thanks to God for the blessings that He has showered on us, we can add thanks for a Constitution that protects religious liberty in our country and a Supreme Court which refuses to abandon that first freedom,” commented Dr. Grazie Pozo Christie, also of The Catholic Association.

“As the court made clear, New York Gov. Cuomo’s executive order singled out houses of worship for especially harsh treatment, barring many from attending religious services. In light of this ruling, we call on all elected officials to amend any religious discriminatory orders. The First Amendment requires the government to protect the rights of its religious communities.”

Becket’s Goodrich summed up, “This is a HUGE win for religious freedom. All governments are now on notice that they won’t get a free pass when they treat worship worse than secular businesses. Neither the Constitution nor the Supreme Court will sleep through the pandemic.”