Top Posts
Colorado football coach Sanders’ unabashed faith
There’s A Light That Enters Houses With No...
Knowing the One Who Always Keeps His Word
Pregnancy Resource Centers Fight For Life Amidst Opposition
This World is Not Our Home
Lessons Learned From a Gingerbread House
Let There Be Peace on Earth
‘I Wanna Dance’ movie: Whitney Houston’s success and...
Fact Finding, Sight Seeing, and Prayer Walking
Kidney donation led to 8 life-saving surgeries
Home Tags Posts tagged with "NEWSWEEK"

BROOKLYN, NEW YORK (ANS) — The persecution and genocide of Christians across the world is worse today “than at any time in history,” and Western governments are failing to stop it, according to a report from a Catholic organization.

NEWSWEEK magazine said the study by Aid to the Church in Need stated the treatment of Christians has worsened substantially in the past two years compared with the two years prior, and has grown more violent than any other period in modern times.

“Not only are Christians more persecuted than any other faith group, but ever-increasing numbers are experiencing the very worst forms of persecution,” the report said. 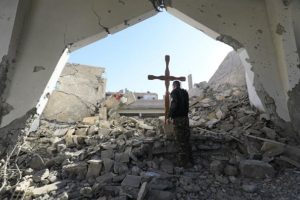 A member of the Syrian Arab-Kurdish forces places a cross in the rubble of the heavily damaged Armenian Catholic Church of the Martyrs in Raqqa, Syria. Getty Images.

The Newsweek article said the research showed that in that time, Christians suffered crimes against humanity, and some were hanged or crucified. The report found that Saudi Arabia was the only country where the situation for Christians did not get worse, and that was only because the situation couldn’t get any worse than it already was.

The authors criticized the administration of President Donald Trump for not holding Saudi Arabia accountable for its human rights violations and instead focusing on the trade relationship between the two nations. In May 2017, Trump signed a $110 billion arms deal with Saudi Arabia during his first overseas trip in office.

Newsweek said the report put special focus on Middle Eastern countries like Iraq and Syria, where the authors argued Christians would have been entirely wiped out if it weren’t for military action and the assistance of Christian humanitarian organizations, like Aid to the Church in Need.

“The defeat of Daesh [the Islamic State militant group] and other Islamists in major strongholds of the Middle East offers the last hope of recovery for Christian groups threatened with extinction,” the report found. “Many would not survive another similar violent attack.”

The report, which was released in November 2017 but received renewed attention this week, is based on research in the countries and testimony from victims. It detailed attacks against Coptic Christians in Egypt and monasteries burned in Syria.

In Africa, the report focused on countries like Sudan, where the government ordered that churches be destroyed, and Nigeria, where ISIS-affiliated groups like Boko Haram have led a surge in attacks on Christians. In Eritrea, hundreds of Christians have been rounded up and imprisoned over the past year because of their faith.

The report also documented numerous case studies in which Christians in countries such as India and Nigeria were murdered or beaten for practicing their faith.

“A Christian pastor in India was left in a coma after being beaten in a ‘planned’ attack apparently carried out by Hindutva extremists,” the report noted. “Before slipping into unconsciousness, the pastor told police that the attack was religiously motivated.”

“You must never come to our village to pray. You should never enter our village,” the men told the pastor, according to the report.

Newsweek said that in late October, Vice President Mike Pence pledged that the Trump administration would redirect aid money formerly given to the United Nations to the U.S. Agency for International Development, a move that was meant to appease Christian organizations that say the U.N. isn’t doing enough for persecuted Christians.