Top Posts
Knowing the One Who Always Keeps His Word
Pregnancy Resource Centers Fight For Life Amidst Opposition
This World is Not Our Home
Lessons Learned From a Gingerbread House
Let There Be Peace on Earth
‘I Wanna Dance’ movie: Whitney Houston’s success and...
Fact Finding, Sight Seeing, and Prayer Walking
Kidney donation led to 8 life-saving surgeries
The Power of Curiosity
When Love Came Down at Christmas
Home Tags Posts tagged with "nice vs. kindness" 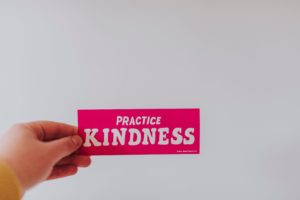 Kindness in today’s world is often overshadowed by the negative around us. But, as God’s chosen people, we are called to “clothe ourselves with compassion, kindness, humility, gentleness and patience” (Col. 3:12).

Ask yourself: Am I stirring the pot of unkindness prevalent in society today or am I seeking to uplift those around me with acts of kindness? As you ponder this question, let’s delve further into what it means to be kind.

Is being nice the same as being kind? We use them interchangeably but do they mean the same?

Being Nice vs. Being Kind

According to dictionary.com, “nice” is defined as “pleasing; agreeable; delightful,” while “kind” is defined as “having, showing, or proceeding from benevolence.”  A “nice person” holds the door for others. So does a “kind person.” Both demonstrate consideration for others.

Kelly Shi with the Markkula Center for Applied Ethics says, “Consider how holding the door for others can be described as either ‘nice’ or ‘kind.’  If the underlying motivation is to create a favorable impression for the purpose of asking for a favor later, then the action can be considered nice due to its pleasing effect, but not kind without a sense of benevolence. Conversely, if the motivation is to spare the other person from extra effort or inconvenience, then the action can be considered kind, as well as nice if it pleases the other person. After all, pleasing others and benevolence do not have to be mutually exclusive.”

An example of nice vs. kind can be found in Galatians 4:17-18. After hearing the Galatians had been duped by false teachers, the Apostle Paul writes a letter to point out the truth. “Those false teachers who are so anxious to win your favor are not doing it for your good. What they are trying to do is to shut you off from me so that you will pay more attention to them. It is a fine thing when people are nice to you with good motives and sincere hearts, especially if they aren’t doing it just when I am with you!” Paul was pointing to the motives of the Judaizers.

Bitten by the Kindness Bug

Reading or hearing about acts of kindness in today’s world motivates me to be kinder. A recent Reader’s Digest article titled “Kindness: Pass It On!” detailed the story of a young woman with a tiny infant aboard an airplane. The baby became ill, vomiting on her mother and the seat cushion. The plane turned around to have the seat belt and cushion replaced.

“Everyone hated me,” said Nicole Cliffe. But it was a simple act of compassion from a flight attendant that made Cliffe’s day. The attendant gave her a pair of yoga pants to replace her soiled clothes.  But that wasn’t the end of her kindness. She assisted the frazzled mom by taking turns holding and comforting the infant.

Impressed by the attendant’s kindness, Cliffe tweeted her story. She asked others to share their own stories of unexpected kindness on her twitter feed.

Trending on the Internet

Cliffe’s tweet resulted in digital conversations filled with stories of kindness. A young mom was shopping with her son. When he asked for gummy treats, she told him they couldn’t afford them because Daddy had lost his job. Overhearing the conversation, a man approached the woman and handed her a $50 bill. He said, “You dropped this.”

Another act of kindness resulting from Cliffe’s tweet told the story of a Best Buy customer who gave $300 to pay for an employee’s doctor visit and medicine. The employee’s insurance hadn’t kicked in yet.

Other stories mentioned simple acts of kindness: sharing a package of tissues with a stranger who was crying on a train; an elderly woman holding the hand of a person who had fainted on the subway until EMTs arrived; an Army soldier who gave up his airplane seat so the young wife and child of a deployed soldier could get home to her parents for Christmas.

The Power of Kindness

Kindness doesn’t have to involve money, either.  French writer Blaise Pascal says it best. “Kind words do not cost much. Yet they accomplish much.”

Proverbs 16:24 reminds us “Kind words are like honey—enjoyable and healthful (TLB). Kindness is powerful, both for the giver and the recipient. Medical science proves being kind improves your mood, lowers your blood pressure and increases your positive thinking.