Top Posts
There’s A Light That Enters Houses With No...
Knowing the One Who Always Keeps His Word
Pregnancy Resource Centers Fight For Life Amidst Opposition
This World is Not Our Home
Lessons Learned From a Gingerbread House
Let There Be Peace on Earth
‘I Wanna Dance’ movie: Whitney Houston’s success and...
Fact Finding, Sight Seeing, and Prayer Walking
Kidney donation led to 8 life-saving surgeries
The Power of Curiosity
Home Tags Posts tagged with "Not Forgotten"

WASHINGTON, D.C. (ANS) – Pastor Andrew Brunson spent more than two years wrongfully imprisoned in Turkey, separated from his family, after more than two decades of Christian ministry in the country.

After relentless advocacy from the ACLJ and diplomatic actions taken by the Trump Administration – including now ACLJ Senior Counsel for Global Affairs Mike Pompeo and ACLJ Senior Advisor for National Security and Foreign Policy Ric Grenell – Pastor Brunson received his freedom and was able to return home to America.

Now, The American Center for Law and Justice (ACLJ) has released the new documentary short film, “Not Forgotten – The Release of Pastor Brunson.” 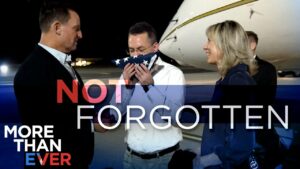 Not Forgotten – The Release of Pastor Brunson Documentary

The short is the first in a brand new limited run series called “ACLJ: More Than Ever,” officially launching in June. “Not Forgotten – The Release of Pastor Brunson” is available for viewing now on ACLJ’s official YouTube channel and at www.MoreThanEver.com .

On the May 18 episode of “Sekulow,” the nationally syndicated daily radio and streaming program hosted by ACLJ’s Jay Sekulow and Jordan Sekulow, Grenell, who was serving as U.S. Ambassador to Germany at the time, recalled greeting Pastor Brunson on the tarmac in Germany hours after being freed.

“It was incredibly emotional and as he walked down the stairs of that plane, and I was at the bottom of the stairs with an American flag, I had to struggle to keep my emotions intact,” Grenell said.

The ALCJ said in an email monitored by ANS, “While we celebrate his freedom, we grapple with the reality that with a new Administration in the White House, it may prove to be more difficult to secure the release of captive or imprisoned Christians. That’s why the work of the ACLJ is needed now more than ever.”

The American Center for Law and Justice (ACLJ), focusing on the preservation and defense of constitutional rights, is based in Washington, D.C. For more information, visit https://aclj.org .

“Not Forgotten – The Release of Pastor Brunson Documentary” can be viewed online at: https://morethanever.com