Top Posts
Pregnancy Resource Centers Fight For Life Amidst Opposition
This World is Not Our Home
Lessons Learned From a Gingerbread House
Let There Be Peace on Earth
‘I Wanna Dance’ movie: Whitney Houston’s success and...
Fact Finding, Sight Seeing, and Prayer Walking
Kidney donation led to 8 life-saving surgeries
The Power of Curiosity
When Love Came Down at Christmas
A Walk of Faith Begins with a Step...
Home Tags Posts tagged with "Notre Dame"

ST. LANDRY PARISH, LOUISIANA (ANS) — As more than $1 billion has been raised to restore Notre Dame Cathedral, and the French President announced an international competition to redesign the church’s spire, a Louisiana resident made a plea for funds to restore other churches that have been destroyed by fire.

The outpouring of generosity in response to the fire at Notre-Dame cathedral has led to a renewed focus on fundraising for black churches in the United States which were destroyed by an arsonist earlier this year, according to the BBC (British Broadcasting Corporation).

The BBC said that while French firefighters tackled the blaze at the 850-year-old Notre Dame Cathedral, Louisiana resident Megan Romer tweeted her sadness over the cathedral’s destruction. 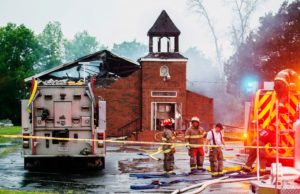 “However, she also took the opportunity to divert her followers’ attention to three other churches devastated by fire that did not have billionaires queuing up to save them,” the BBC reported.

“If you are going to donate money to rebuild a church this week, I implore you to make it the black churches in St. Landry Parish,” Ms Romer wrote.

Romer was referring to three historically black churches in Louisiana that were subject to arson attacks in late March and earlier this month. St Mary Baptist Church, the Greater Union Baptist Church and the Mount Pleasant Baptist Church were razed to the ground.

The BBC said that when Romer wrote her appeal, the fundraising page of the three churches was far short of its $1.8m goal — with fewer than $100,000 raised.

While acknowledging the huge importance of the French cathedral, she wrote: “Remember that famous history isn’t the only history. Imagine the courage it took to build and fill a black house of worship in post-bellum rural Louisiana. And now.”

Romer also reminded people that the parish had been the site of the deadly Opelousas massacre in 1868.

The BBC said that since Monday, her tweet has been shared more than 37,000 times as word spread all over social media. Influential figures like Hillary Clinton and CNN anchor Jake Tapper pushed the fundraising page to their followers.

“The rebuild of Notre-Dame will be well-funded,” wrote journalist Yashar Ali, who donated $1,000 to the fund.

On Wednesday, the BBC reported total donations for the three churches passed $1m with more than 18,000 people donating.

“It shows that the church is not only fireproof, but it’s also faith-proof,” Pastor Mason Jack told local news channel News15. “To get calls from New York, and across the country and to show love for our sister churches means a whole lot to us,” he said.

The BBC said all three of the Louisiana fires were started with gasoline and occurred around Opelousas, about 60 miles (100km) west of the state capital of Baton Rouge.

The BBC reported Holden Matthews, 21, a son of a local police deputy was arrested over the fires and has now been charged with hate crimes. He pleaded not guilty during a court appearance on Monday.

During the search for a suspect, Governor John Bel Edwards said the attacks were a reminder “of a very dark past of intimidation and fear,” the BBC said.