Top Posts
Colorado football coach Sanders’ unabashed faith
There’s A Light That Enters Houses With No...
Knowing the One Who Always Keeps His Word
Pregnancy Resource Centers Fight For Life Amidst Opposition
This World is Not Our Home
Lessons Learned From a Gingerbread House
Let There Be Peace on Earth
‘I Wanna Dance’ movie: Whitney Houston’s success and...
Fact Finding, Sight Seeing, and Prayer Walking
Kidney donation led to 8 life-saving surgeries
Home Tags Posts tagged with "“Open Society” Foundation"

This article is Part Two of Two

Grégor Puppinck, lawyer and director of the French European Centre for Law, who has been working on ECHR cases for 20 years and has a good relationship with many of its judges, says the Court has increasingly embraced the ideological viewpoint of the Open Society Foundation in recent years. As a result, the ECHR’s decisions systematically support the idea that “diversity and multiculturalism are and must remain essential European values.” 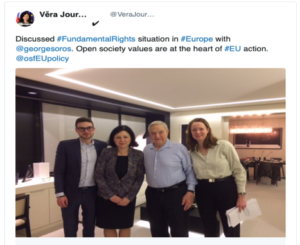 Puppinick says that Soros likes to present himself as “a head of state without a state” since he requires no state to carry out his agenda. Soros knows that the 47 countries that have signed the European Convention on Human Rights are required to make sure their laws are in line with the case law established by the ECHR. This makes the ECHR a vital point where Soros can influence his agenda without wrangling with democratically elected governments or irksome citizens represented by the 47 states.

Puppinck’s report reveals the ‘Soros judges’ working in the ECHR.

Puppinck, who is responsible for the new report on Soros and his influence in the ECHR, sifted through the résumés of the 100 judges that have sat in the ECHR since 2009 in order to identify what their previous NGO links were. He also used public data he accessed through the Parliamentary Assembly of the Council of Europe.

After six months of meticulous research, and a report supported by 200 pages of appendices, he revealed how George Soros’s network of NGOs have extended their influence over the European Court of Human Rights and subsumed it under their own ideology.

Based on his exhaustive study, Puppinck has found that the ECHR clearly has an imbalance of judges from the Open Society, with 22 of the judges with direct links to the Open Society Foundation and its network. If the criteria is expanded to those judges with indirect links, such as those that receive funding from Soros’s network, then the number of judges linked to Soros-backed organizations rises dramatically.

The European Court of Human Rights has enormous power.

Soros’s return on investment in his connections with ECHR judges has been enormous, as these Strasbourg human rights judges can utilize considerable discretion in cases. Where national legal systems and courts often have hundreds of years of case law that restrict how judges can rule on a case, Puppinick said to Valuers magazine that the Human Rights Convention is a very short document with very general guidelines, which means ECHR views the Convention as a “living instrument to be interpreted […] in the light of current living conditions.”

“The influence of the judge’s mindset, his ideas and his training, is considerable,” said Puppinck. “Human rights as a discipline is strongly ideological in nature. You can make the Convention say one thing and its opposite. If a judge believes that the legalization of surrogacy is necessary in the name of freedom, or if, on the contrary, he condemns it in the name of dignity, he can have both said in the same text.”

That means rulings on sexuality, gay marriage, biotechnology, immigration, and family reunification are all mostly left to the interpretation of ECHR.

The judges are selected mainly through a political process, with the body responsible for selecting them, the Parliamentary Assembly of the Council of Europe, known as a very political organization.

The judges also make their political biases clear. In recent years, it has become commonplace for ECHR judges to a rainbow-colored cord supplied by the Council of Europe around their necks. For more than ten years, these judges have dropped expressions such as “Mrs.” and “Mr.”, saying they are too gendered. Despite these realities, many in Europe view these judges as neutral arbiters, a viewpoint that lends weight to their decisions.

This article is based on information from Remix, which offers news and commentary from Central Europe, the Visegrád countries of the Czech Republic, Hungary, Poland and Slovakia, a cultural and political alliance, all of which are members of the EU and of NATO, to advance co-operation in military, cultural, economic and energy matters with one another and to further their integration to the EU.