Top Posts
Pregnancy Resource Centers Fight For Life Amidst Opposition
This World is Not Our Home
Lessons Learned From a Gingerbread House
Let There Be Peace on Earth
‘I Wanna Dance’ movie: Whitney Houston’s success and...
Fact Finding, Sight Seeing, and Prayer Walking
Kidney donation led to 8 life-saving surgeries
The Power of Curiosity
When Love Came Down at Christmas
A Walk of Faith Begins with a Step...
Home Tags Posts tagged with "Otto Warmbier"

BEIJING, CHINA (ANS) – In a bizarre twist in the case of student Otto Warmbier, detained and then released by North Korea in a comatose state, the Washington Post reports North Korea issued a $2 million bill for his hospital care, insisting that a U.S. official sign a pledge to pay it before being allowed to fly the University of Virginia student from Pyongyang in 2017.

ASSIST News Founder Dan Wooding, one of the first Christian journalists to visit North Korea, said: “I stayed at the same hotel and I think it is disgusting for them to demand payment like this and how terrible it was that they wanted to charge for this poor man’s so-called treatment.”

Wooding stated: “I am glad I wasn’t arrested at that time, especially because every one of my radio broadcasts for the UPI Radio Network in Washington DC, were monitored and recorded. They may have been upset with some of my stories, but never told me they were.  I also gave my testimony on North Korean State TV and it was broadcast.”

Wooding was responding to the news out of Washington, D.C., that North Korea is demanding payment for Otto Warmbier’s medical care while detained there. 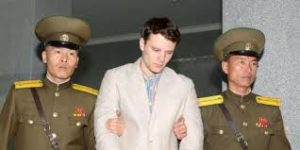 CNN reported the North Korean government presented the United States with a bill for $2 million for the hospital care of Otto Warmbier, the American college student who was held as a prisoner by Pyongyang, and insisted the US sign a pledge to pay the bill before releasing him from their custody in 2017, according to two sources familiar with the matter.

Warmbier was in a comatose state at the time of his release from North Korean custody and died a few days after returning to the United States.

The bill was handed to Joseph Yun, the former State Department Special Representative for North Korea who traveled to Pyongyang in June 2017 to bring Warmbier home, the sources told CNN.

Yun, who had orders from President Donald Trump to bring Warmbier home, signed the bill after informing then-Secretary of State Rex Tillerson about it. Tillerson then told Trump about the bill, according to the source.

The Trump administration has not paid this bill, a third source familiar with the matter told CNN Thursday, adding that North Korea did not raise the issue as it sought to begin easing the tensions with the US in 2018 nor when Secretary of State Mike Pompeo negotiated the release of three Americans that same year, the source said.

While the North Koreans did not bring up the bill during Trump’s summits with Kim Jong Un in Singapore and Vietnam, the source noted that the expectation for this payment could be brought up again.

“We do not comment on hostage negotiations, which is why they have been so successful during this administration,” White House press secretary Sarah Sanders said in a written response to CNN.

The State Department declined to comment and referred to Sanders’ response.

The Washington Post was first to report that North Korea presented Yun with the invoice.

The presentation of the invoice — not previously disclosed by U.S. or North Korean officials — was “extraordinarily brazen even for a regime known for its aggressive tactics,” according to Anna Fifield of the Washington Post.

The Washington Post says the main U.S. envoy sent to retrieve Warmbier signed an agreement to pay the medical bill on instructions passed down from President Donald Trump, according to two people familiar with the situation. They spoke on the condition of anonymity because they were not authorized to discuss the matter publicly.

The newspaper said the bill went to the Treasury Department, where it remained — unpaid — throughout 2017, the people said. However, it is unclear whether the Trump administration later paid the bill, or whether it came up during preparations for Trump’s two summits with Kim Jong Un.

Warmbier, who was a 21-year-old student, fell into a coma for unknown reasons the night he was sentenced to 15 years in prison with hard labor in March 2016. He was convicted on charges stemming from pulling down a propaganda sign in a Pyongyang hotel in the early hours of Jan. 1, 2016 — an infraction that would be minor in almost any other country, but in North Korea it was considered a “hostile act against the state.”

After Otto’s sentencing, the North Koreans held onto the comatose student for another 15 months, not even telling American officials until June of 2017 that he had been unconscious all that time. News of his condition sparked a frantic effort led by Joseph Yun, the State Department’s point man on North Korea at the time, to get Warmbier home.

The newspaper said Warmbier’s brain damage and then death at North Korea’s hands caused widespread shock in the United States, but the news that North Korea expected the government to pay for his care has caused further backlash.

The newspaper went on to report Fred and Cindy Warmbier sued North Korea over their son’s death and in December were awarded $501 million dollars in damages — money that the Kim regime will never pay.

Judge Beryl Howell, of the United States District Court in the District of Columbia, said that it was “appropriate to punish and deter North Korea” for the “torture, hostage taking and extrajudicial killing of Otto Warmbier.”

According to the Washington post, North Korea has taken Americans as hostages before, and this is not the first time Pyongyang has threatened huge hospital bills for American citizens it had detained.

Kenneth Bae, a Christian missionary and diabetic who was held in North Korea for almost two years, said he was told he would be charged 600 euros a day for his care at the Friendship Hospital. Bae wrote in his memoir, “Not Forgotten,” that the bill for his first stint in hospital while in detention came to 101,000 euros — about $120,000 at the time.

The newspaper added that by the end of his detention in November 2014, after another spell in hospital, Bae calculated the North Koreans would be charging him $300,000. In the end, he was released without paying any of it.