Top Posts
Colorado football coach Sanders’ unabashed faith
There’s A Light That Enters Houses With No...
Knowing the One Who Always Keeps His Word
Pregnancy Resource Centers Fight For Life Amidst Opposition
This World is Not Our Home
Lessons Learned From a Gingerbread House
Let There Be Peace on Earth
‘I Wanna Dance’ movie: Whitney Houston’s success and...
Fact Finding, Sight Seeing, and Prayer Walking
Kidney donation led to 8 life-saving surgeries
Home Tags Posts tagged with "Palestinian Authority Consulate"

WASHINGTON, DC (ANS) —  In 2019, then-Secretary of State Mike Pompeo (now ACLJ Senior Counsel for Global Affairs), shut down the US Consulate in Israel. Now, the U.S. Embassy in Jerusalem serves all – Jewish, Christian, Muslim, and anyone else – with equal dignity and courtesy.

Yet, in a profoundly cynical move, the Biden Administration has just reopened the consulate in Jerusalem, less than 3 miles away from the official U.S. Embassy, according to the American Center for Law and Justice. 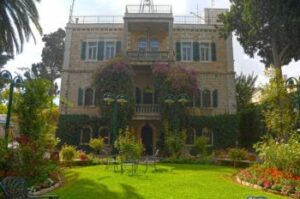 The former US Consulate on 18 Agron Road in Jerusalem

A recent commentary by Jeff Ballabon, writing for the American Center for Law and Justice (ACLJ), says: “There is no actual need for a ‘Palestinian’ consulate in Jerusalem – except as a renewed political attack on Israel’s sovereignty over its capital.”

As former U.S. Ambassador to Israel David Friedman explained this  week, America’s Jerusalem consulate has for decades been “a perpetual cause of friction with the U.S. Embassy to Israel and . . . a hotbed for some anti-Israel ideologues.” Historically, the consulate worked closely with and was staffed by what are commonly known as “Arabists” in the State Department, deeply hostile to Israel. The animus went beyond policy towards Israel.

Ballabon writes: “Like many Jewish Americans visiting Israel who had need to visit the consulate, I experienced firsthand – more than once – the notorious antagonism its personnel displayed to Jews. By announcing that they plan to open a consulate in Jerusalem specifically for ‘Palestinians’ this Administration is attempting to undo America’s recognition of Jerusalem as Israel’s sovereign capital – something mandated by U.S. law.”

Ballabon says the Jerusalem Embassy Act, passed with tremendous bipartisan support in 1995 and signed into law, lists some of the underpinnings – the historical, legal, and moral rights – of Israel to choose its own capital:

The Congress makes the following findings:

(1) Each sovereign nation, under international law and custom, may designate its own capital.

(2) Since 1950, the city of Jerusalem has been the capital of the State of Israel.

(3) The city of Jerusalem is the seat of Israel’s President, Parliament, and Supreme Court, and the site of numerous government ministries and social and cultural institutions.

(4) The city of Jerusalem is the spiritual center of Judaism, and is also considered a holy city by the members of other religious faiths.

(5) From 1948–1967, Jerusalem was a divided city and Israeli citizens of all faiths as well as Jewish citizens of all states were denied access to holy sites in the area controlled by Jordan.

(6) In 1967, the city of Jerusalem was reunited during the conflict known as the Six Day War.

(7) Since 1967, Jerusalem has been a united city administered by Israel, and persons of all religious faiths have been guaranteed full access to holy sites within the city.

Ballabon said: “There can be no doubt that our embassy belongs in Jerusalem – the capital city of a sovereign nation and ally and the only truly free and democratic state in the Middle East. And, despite the last couple of decades of attempting to rewrite thousands of years of universally known history, there can be no doubt that Jerusalem is the capital city of the Jewish people and no other. Nonetheless, Israel remained literally the only sovereign state in the world whose choice of capital was denied by other nations.”

Ballabon writes that when President Trump announced that he was going to move the U.S. Embassy, his detractors declared with great certitude that the move would result in a conflagration – a Middle East war uniting Arab and Muslim countries, massive death and destruction for Israel, and a blow against any hope of furthering peace.

“They could not have been more mistaken. By signaling with the most powerful symbol imaginable that the United States stood firmly by its allies and its commitments – that America would stand resolutely with the Jewish State, that Jews were indigenous to the land of Israel, that Jerusalem was the heart of the Jewish nation, and that Arab intransigence and terror would not be rewarded – moving our embassy became a key element in bringing historic peace between Israel and Arab nations.”

Ballabon says that, “Of course, having argued that the move was a mistake, the Left – including some of the same Democrats who had always claimed they supported the move – criticized the embassy move and even boycotted the ceremony celebrating the move.”

Thus, he says, when President Biden campaigned, he was asked if he planned to undo the move. He insisted that he would not.

“This week, however, in the immediate aftermath of a massive terror war launched against Israel, Biden’s Secretary of State, Anthony Blinken, announced that America will open an official consulate for the Palestinian Authority (PA) – in Israel’s capital.

“This underhanded, possibly illegal move directly undercuts Israel’s sovereignty over Jerusalem. The PA is entirely based in the city of Ramallah. It has no presence in Jerusalem and has never been located there. It is troubling enough that Biden would re-engage with the terror-supporting PA and send it money (also likely a violation of U.S. law); but to establish a beachhead for a hostile terrorist pseudo-government in the center of a sovereign state’s capital? To promote the PA while it continues publicly to pay terrorists and promote the eradication of all Israel?”

Ballabon concludes: “Now we are facing a deluge of anti-Israel rhetoric and policies. We will fight harder than ever in Washington, Jerusalem, and around the world to protect Israel’s people and sovereign rights.”