Top Posts
Colorado football coach Sanders’ unabashed faith
There’s A Light That Enters Houses With No...
Knowing the One Who Always Keeps His Word
Pregnancy Resource Centers Fight For Life Amidst Opposition
This World is Not Our Home
Lessons Learned From a Gingerbread House
Let There Be Peace on Earth
‘I Wanna Dance’ movie: Whitney Houston’s success and...
Fact Finding, Sight Seeing, and Prayer Walking
Kidney donation led to 8 life-saving surgeries
Home Tags Posts tagged with "Palestinian Economic Peace Plan"

BAHRAIN (ANS) — President Donald Trump’s senior adviser, Jared Kushner, appealed Tuesday directly to the Palestinians, asking them to consider his ambitious $50 billion economic plan despite their leadership’s outright rejection of the proposal, even before it was ever released.

Kushner kicked off a two-day workshop in the tiny Gulf kingdom of Bahrain aimed at building support for his economic vision, according to World Israel News and AP, as reported by Worldisraelnews.com. 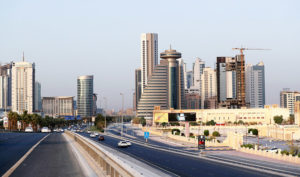 “My direct message to the Palestinians is that despite what those who have let you down in the past have told you, President Trump and America have not given up on you,” Kushner said. “This workshop is for you and if this is executed correctly it will lead to a better future for the Palestinian people: a future of dignity, prosperity and opportunity.”

World Israel News said Kushner’s audience in Bahrain did not include an official Israeli or Palestinian delegation. Those who heard Kushner in person were Arab finance ministers, the heads of international financial organizations and global business executives and investors.

Specifically, the heads of the International Monetary Fund and the World Bank are attending and speaking at the event, as will the head of FIFA, the international soccer federation, and the managers of numerous large investment funds.

World Israel News said that without seeing its contents, Palestinian leaders rejected the proposal, which aims in 10 years to create a million new jobs, slash unemployment and improve living standards in Judea and Samaria, Gaza and across the Middle East. U.S. officials say the political portion of the plan addressing borders and other key issues will not be released until the fall.

While Kushner acknowledged that a political solution is key to the success of the economic proposal, he said it was first more important to set out what is economically possible.

“Agreeing on an economic pathway forward is a necessary precondition to resolving what has been a previously unsolvable political situation,” he said.

Meanwhile, Palestinian terror group Hamas called a general strike in Gaza on Tuesday to protest the meeting, with demonstrators in Judea and Samaria burning effigies of Trump and featuring a donkey pasted over with images of Gulf royals.

“Palestine is not for sale!” protesters chanted. “From Bahrain to Saudi Arabia we are not tempted by your millions!” they said.

World Israel News stated the Palestinians cut ties with the White House after Trump officially recognized Israeli’s capital, Jerusalem, in December 2017, and say they will not accept any peace proposal from the Trump administration.

Trump’s Mideast team recently signaled it would abide by Israeli annexation of parts of Judea and Samaria, the biblical heartland of the Jewish people, deepening Palestinian suspicions.

According to World Israel News, Saudi Arabia, one of the few Arab countries to send its foreign minister to the event, said it remained committed to a Palestinian state, issuing the following statement: “The Kingdom reiterates its firm position on the Palestinian cause and solving it in accordance with the Arab Peace Initiative, which called for establishing an independent Palestinian state along the borders of 1967 with East Jerusalem as its capital.”

Egypt and Jordan, the only Arab nations to have signed peace deals with Israel, are sending mid-level representatives to Bahrain and said they would not abandon demands for a Palestinian state.

At a ceremony hosted by Israel’s president to mark 40 years of Egyptian-Israeli peace on Tuesday, Egypt’s ambassador to Israel, Khaled Azmi, said his country’s “vision was, and still is, based on full nation-statehood and security for everyone in the region.”

Bahrain, which has close ties to the Saudis, has been criticized for hosting the conference and sharply limited the number of journalists allowed to cover it. It has defended its decision by saying its only objective is to support the “brotherly Palestinian people.”

The Bahrain Conference, which focused on economic investment in the Palestinian Authority (PA) as part of Trump’s Middle East peace plan, started Monday, and Abbas’ Fatah Movement has already called for violence to protest against the workshop, as documented by Palestinian Media Watch. 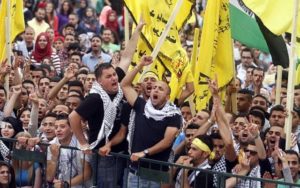 Now Fatah’s youth movement, Shabiba, has threatened to start a wave of terror attacks in response to Bahrain. Referring to how Fatah “ignited the first Intifada and the Al-Aqsa Intifada” – the two major waves of Palestinian violence and terror against Israelis – Shabiba’s secretary-general threatened that Fatah’s youth movement is “still capable of making the ground burn under the feet of the tyrants,” and that it is in “a state of high alert.”

“Fatah Revolutionary Council member and Shabiba Secretary-General in the West Bank Hassan Faraj noted that Shabiba – the backbone of the [Fatah] Movement and the spearhead of the resistance and defense of our people’s rights – has already declared a state of high alert among the ranks of its members.

He also emphasized that Shabiba is prepared for every eventuality, and that its members who ignited the first Intifada (i.e., Palestinian wave of violence and terror against Israel, approximately 200 Israelis murdered, 1987-1993) and the Al-Aqsa Intifada (i.e., PA terror campaign 2000-2005) are still capable of making the ground burn under the feet of the tyrants.” [Official PA daily Al-Hayat Al-Jadida, June 21, 2019]

Hassan Faraj made this intifada threat in response to US Middle East Envoy Jason Greenblatt, who reacted to PMW‘s exposure of Fatah’s call for “escalating confrontations” by calling Fatah’s threat “despicable.”

“Fatah is calling for violence against Israelis as an act of protest. Despicable. Fatah seeks violence over the idea of exploring peace & prosperity for the Palestinian people.” [Twitter account of Jason Greenblatt, June 20, 2019]

Shabiba also lashed out at Greenblatt and the US, referring to US Ambassador to Israel David Friedman, Jason Greenblatt, and US Presidential Advisor Jared Kushner as “the Zionist hate triangle.”

Shabiba’s secretary-general further stated that any Palestinian who participates in the Bahrain workshop is considered a traitor, and threatened that Fatah youth will “respond with full force.”

‘A Day of Escalation’

Like Fatah and Shabiba, the National and Islamic Forces in the Ramallah and El-Bireh district called for “popular demonstrations of rage” and “escalation” to show opposition to the Bahrain workshop:

“The National and Islamic Forces in the Ramallah and El-Bireh district called to carry out a number of activities in response to the workshop in Bahrain… the forces called to consider tomorrow [Monday] a day of popular demonstrations of rage as a sign of resistance to the plans to eliminate [the Palestinian cause], and the plots to eliminate our people’s rights.

The author of this story, Michael Ireland, is a self-supported media missionary with ANS. Click here to support him as a missionary journalist.
June 26, 2019
FacebookTwitterPinterestEmail