Top Posts
Colorado football coach Sanders’ unabashed faith
There’s A Light That Enters Houses With No...
Knowing the One Who Always Keeps His Word
Pregnancy Resource Centers Fight For Life Amidst Opposition
This World is Not Our Home
Lessons Learned From a Gingerbread House
Let There Be Peace on Earth
‘I Wanna Dance’ movie: Whitney Houston’s success and...
Fact Finding, Sight Seeing, and Prayer Walking
Kidney donation led to 8 life-saving surgeries
Home Tags Posts tagged with "Paradise 4Kids"

MELBOURNE, AUSTRALIA (ANS – Oct. 17, 2018) — Following a three-day journey, missionary Father Themis Adamopoulos is back in his hometown of Melbourne to continue spreading the word about his mission work in Sierra Leone with Paradise 4 Kids. 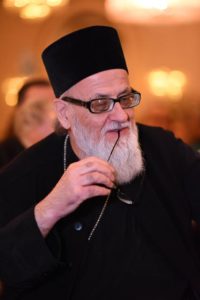 In 10 years, his organization, Paradise 4 Kids has certainly exceeded his expectations, now operating their own school and an orphanage in the country, with two more currently under construction, which will see the mission responsible for some 50 orphaned children by the end of October.

“I didn’t expect such growth in such a small amount of time,” Fr Themis said.

“Our achievements through our Lord Jesus Christ, because I have to give Him the honor for what has happened, is that we’ve been able to do things that are really quite remarkable,” he told ASSIST News Service (ANS) www.assistnews.net

It has undoubtedly been a learning curve for the former rock star-turned-missionary, who served eight years in Kenya prior to creating a base in Sierra Leone, a place where people along the way have been wary of his intentions.

“Africans have to some degree been exploited by the whites and they have been exploited by Colonialism, and there is some suspicion in what is your role coming here; why are you here, what are you trying to do? It takes time to establish your credentials as being someone who really just wants to help,” Fr Themis said.

This has been achieved in Sierra Leone, he says, where the community is familiar with the church’s work and knows that there is “no hidden agenda.”

Raised in Melbourne’s west, Fr Themis returns ‘Down Under’ most years, but the mission is never far from his mind, his travels more often than not coordinated to maximize his efforts in Sierra Leone, where he has borne witness to poverty like nowhere else in the world.

“We are dealing with one of the poorest countries in the world,” he explained.

“In Australia, we think of poverty when we see someone in the street busking, or some guy who is a drug addict and sleeping in the street. While I feel really sorry for these people, and I even try to help them when I’m here, [there are] all types of opportunities for them. But I’m talking about people where there is no opportunity. Where the culture of poverty is so severe, you are basically born into a culture that provides you $2.00 a day to live on.”

Unlike Australia, Fr. Themis says in Sierra Leone there is no social welfare benefit, nor any other form of support, resulting in 60 percent of the population living below the poverty line. This is where the church comes in, taking up the role that governments are unable to play.

“People know we are there to assist, so we get a lot of demands. The minute I come out of my room, I’m going to be bombarded with demands from morning to night. So I allocate certain hours of the day where I sit in my office and hear all those tales and woes, and determine who to help, how helpful, and how much is affordable,” Fr Themis explained.

While their mainstay mission is to provide free education, they have expanded their services to employ some 80 people in varying roles from teachers, lecturers and nurses, to priests, gardeners and cleaners, provide scholarships to go to university, free medical care, and help people pay their rent, and put food on the table.

Having called Sierra Leone home for the past decade, a country ranked 14 in the top 25 poorest countries, Fr Themis says his eyes have been opened to how the other half lives.

“We are living on a different planet in Australia,” he said.

“On behalf of these people [in Sierra Leone], who are ultimately the poorest people on this earth, truly, I say thank you to them,” he said.

“I hope they can continue to assist with their work and their generosity. If they come to our functions they will see what has happened because of their generosity and I’m sure they’ll feel good about it.”

He continued: “The difference is night and day; there’s no comparison. When I come back here, one of the first things I do is go to the supermarket and just look at all the variety; it’s a mind-blower. Had I not gone overseas, I would not have realized that; the density of variety that we get. I just would have taken that for granted.”

Set to take his fundraising efforts for those less fortunate, and children orphaned by Ebola to Sydney and Brisbane, there Fr Themis will be reunited with his friend and fellow band-member of The Flies in the 1960s, singer and guitarist Ronnie Burns, who has offered to perform for free on the night.

The missionary says he can’t thank the Orthodox community of Australia enough for their contributions over the years.