Top Posts
Knowing the One Who Always Keeps His Word
Pregnancy Resource Centers Fight For Life Amidst Opposition
This World is Not Our Home
Lessons Learned From a Gingerbread House
Let There Be Peace on Earth
‘I Wanna Dance’ movie: Whitney Houston’s success and...
Fact Finding, Sight Seeing, and Prayer Walking
Kidney donation led to 8 life-saving surgeries
The Power of Curiosity
When Love Came Down at Christmas
Home Tags Posts tagged with "Pastor Karma Oraon" 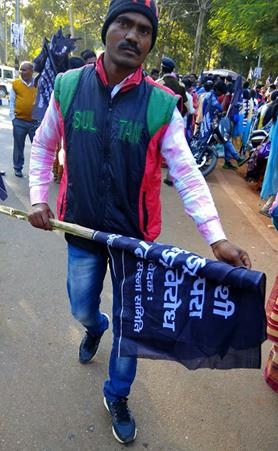 The Rev. Somnath Honhaga, Believers Eastern Church secretary of the Diocese of Chakradharpur, told Morning Star News (www.morningstarnews.org)  that religious freedom in Jharkhand is in danger. 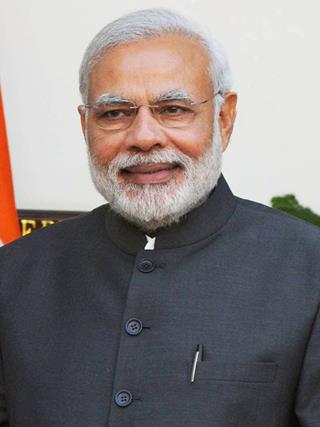 An example of this is when Hindu extremists in India told pastor Karma Oraon they would not stop beating him until he worshipped the monkey god, he felt Christ close to him, he said.

“In those moments when they were kicking and beating me, I felt that even if I die now, the Lord will make the ministry I leave behind fruitful,” Pastor Oraon told Morning Star News. “We are just a few gathering in the name of Jesus. He is our strength.”

His small flock of eight people was meditating on Scripture on Christmas Eve at 10:30 a.m. in Harmu village of Ranchi District, Jharkhand state, when twice as many Hindu nationalists brandishing wooden stick intruded, shouting, “Praise Bajrang Bali.” Bajrang Bali is another name for the popular monkey god Hanuman.

“They forcefully dragged me outside when we were in the middle of meditating on the Word of God,” Pastor Oraon said. “They spewed many words in extreme foul language and beat me on my chest repeatedly.”

As he was dragged out by the collar, one of the Hindu extremists video-recorded the scene, also asking his accomplices to record, forward and circulate the video, sources said.

The Hindu extremists repeatedly asked the pastor his name, refusing to believe him, as his name is typical of area tribal people who practice indigenous religions, not Christianity, he said. They called him an idiot, slapped him and told him to stop lying, and when he showed them his national identification card, they tore the original document to pieces, Pastor Oraon said.

“They slapped me and said, ‘You are Oraon? Tell us what you must do, being an Oraon? Should you should follow the Adivasi [indigenous] religion or this foreign religion?’” he told Morning Star News. “They told me, ‘Immediately you should give up Christianity and embrace Sarnaism/Sarna [indigenous religions) – if you don’t, you will be brutally murdered.”

Pastor Oraon said they told the congregation, “All the Christians in this area beware! There is no place for Christianity here. All of you must embrace Sarna. If anybody goes against this rule, their houses will be set on fire and they will be killed along with their families.”

They kicked him and expelled him from the village, he said.

Chotu Munda, 21, said he was beaten when he tried rescue the 34-year-old pastor and female church members who had also tried to separate the assailants from Pastor Oraon. The pastor noted, “They scolded the sisters in very vulgar language for coming to help rescue me.”

That night at 10 p.m., he went to a police station, but officers refused to register a case against the assailants or even receive his complaint, he said.

“I never had an experience of opposition when I preached gospel or visited families to pray for the sick. But I seek inspiration from my Lord; people have crossed every limit to humiliate Him and crucify Him, but He patiently bore their torture for my sake, for my sins,” Pastor Oraon said. “I strongly feel the presence of my Lord Jesus in all this. Had He not granted the strength to endure, I could have never overcome from what happened.”

Worship Anything but Christ

In a separate incident in Jharkhand state, another group of Hindu extremists beat tribal Christians while they worshipped – also reviling them for leaving their indigenous religion for Christianity.

About 60 Hindu nationalists stormed into a house church on Christmas Day in Behratoli village, Ranchi District, where 16 Christians had gathered to celebrate Christmas.

“They rushed inside and held me by collar – it was sudden,” said pastor Rakesh Tirkey. “They were at least 60 people, and we were just 16. They shouted at us and asked us to stop the singing.”

They arrived on 25 motorcycles, slapped him and asked him his name to determine his indigenous heritage, he said.

“They abused me in extreme foul language, saying, “Idiot, if you are a Tirkey, then how did you become a Christian?’” the 35-year-old father of three told Morning Star News. “They beat me with wooden sticks; the blows got heavier after they got to know that I am a Tirkey.”

Initially they accused him of stealing a motorcycle, and when he showed them the ownership and insurance papers, they told him they didn’t want to see any Christians in the area, he said, adding that they snatched away his Bible, tore the pages to pieces, spit on it, kicked it, and told him, “Stop converting Adivasis – we will slash your neck off.”

When they tried to light a match to set the torn Bible on fire, they were unable to ignite it, he said.

Jeevan Munda, at whose house the worship service was held, was also injured in the attack.

That night Pastor Tirkey went to a police station to file a report, but officers refused to accept his complaint, the pastor said.

“After the attack, I invited the believers to my house in Khunti District and urged them to pray in their houses,” he said. “I told we must stand firm in Christ no matter how severe the opposition.”

He became a Christian eight years ago. Then an alcoholic with declining health that no doctor was able to relieve, he was healed after putting his faith in Christ, he said.

“It was then I decided that the Lord has given me good health, so I will dedicate it to my Lord’s work, and as long as I live, I will serve Him,” he said. “Now I am leading a life full of joy.”

Pastors Oraon and Tirkey belong to the Believers Eastern Church.

Unable to get police to register their cases, the two pastors have filed First Information Reports online, though there has been no progress in the investigations, Honhaga told Morning Star News.

“The police did not make any arrests,” he said. “Instead, we have been told that since the pastors cannot identify the assailants, it is difficult to catch the culprits.” 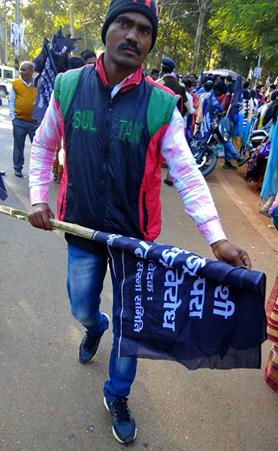 Indigenous leaders on Dec. 24 raised black flags in parts of Jharkhand in protest of rising Christianity and “Western culture,” and Christian leaders suspect indigenous Sarna advocates supported by the Hindu extremist Rashtriya Swayamsevak Sangh (RSS) were behind the attacks.

The Central Sarna Committee (Kendriya Sarna Samiti) of Jharkhand state issued a press release demanding the government enforce the state’s “anti-conversion” law. The law passed last year bans forcible or fraudulent conversion, though comments by Hindu nationalists indicate they mistakenly take it to mean it bans any conversion from Hinduism.

People convicted of fraudulent or forcible conversion can be punished by prison terms of up to three years in Jharkhand state, or up to four years if the person fraudulently or forcibly converted is an indigenous tribal known as Adivasi. Adivasis are entitled to government benefits.

“Christian missionaries are forcefully taking away the rights of Adivasis by converting them,” the Central Sarna Committee statement read, labelling as “Westernization” people converting to Christianity. “People from other faiths representing themselves as Adivasi are rising to the positions of village president, ward members and government employees.”

Phulchand Tirkey, director of Sarna Samiti, demanded the government stop considering Christians as Adivasi, saying, “Christians must not be given the status of Adivasi.”

The Constitution of India recognizes tribal populations who are original inhabitants of a given region as Adivasi regardless of their religious beliefs, a constitutional expert who requested anonymity told Morning Star News.

“There is potential threat to the Christian converts from those who believe in the deep-rooted casteism,” the source said.

During the Dec. 24 protest, Sarna activists were reported to have taken an oath to disrupt Christmas celebrations, according to local media reports.

“Standing in the middle of the main road in the state capital, Ranchi, they shouted these words,” Honhaga said. “They raised slogans against Christianity.”

The smaller churches were attacked, he noted.

“It was a pre-planned attack by the Sarna committee supported by the RSS,” Honhaga said. “They are trying to divide the aboriginal people of this state. The Christian missionaries have played a vital role in bringing education to the Adivasis. They have reached even the remotest parts of Jharkhand, started good schools and propagated the love of God through various activities.”

“The word Adivasi means native of the region, and they want to use tribals as their vote bank by creating divisions among them,” Honhaga told Morning Star News. “If an Adivasi converts to Christianity, how can he lose the status of being an Adivasi? He is the native, and he will remain so. They have left behind the pointless beliefs and myths, idol worship and have come to the Light. Instead of encouraging their progress, they are creating rifts among them. It is pathetic.”

Adivasi Christians in Jharkhand requested prayers for freedom to worship.