Top Posts
There’s A Light That Enters Houses With No...
Knowing the One Who Always Keeps His Word
Pregnancy Resource Centers Fight For Life Amidst Opposition
This World is Not Our Home
Lessons Learned From a Gingerbread House
Let There Be Peace on Earth
‘I Wanna Dance’ movie: Whitney Houston’s success and...
Fact Finding, Sight Seeing, and Prayer Walking
Kidney donation led to 8 life-saving surgeries
The Power of Curiosity
Home Tags Posts tagged with "Pastor Nadarkhani"

TEHRAN, Iran (ANS) — Pastor Yousef Nadarkhani, an Iranian pastor from the Church of Iran denomination who is currently serving a 10-year prison sentence in Evin prison in Tehran, began a hunger strike on 23 September to protest against his children being prohibited from continuing with their education.

Christian Solidarity Worldwide (CSW) reports Pastor Nadarkhani’s 15 year-old son Yoel was informed on 23 September that he could not return to school because he had not completed Islamic studies. In addition, and despite a 2017 court ruling that had allowed him to continue school by attending Islamic studies classes in a non-participatory manner, the pastor’s older son Daniel, 17, has been denied a school report card which would enable him to enrol in higher education. 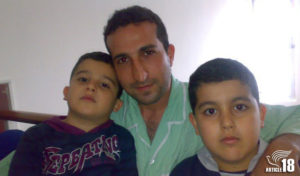 Yousef Nadarkhani with his two sons, Danial (right) and Youeil, before his incarceration.

According to CSW, members of recognised religious minorities, including Christians, are normally exempt from attending classes in Islamic studies, but children of converts to Christianity are considered by the authorities to be Muslims. However, Pastor Nadarkhani never practised Islam prior to espousing Christianity, and was acquitted of apostasy in 2012. Moreover, according to a fatwa issued by Iran’s Supreme Leader in 2009, children born into a Christian family whose parents may be deemed apostate still have the right to receive Christian religious education.

CSW said that in a letter to the authorities of the ward in which he is imprisoned, Pastor Nadarkhani states that his decision to embark on a hunger strike “is motivated by the necessity to defend my children as members of the Christian minority who are violated by discriminatory measures taken at the initiative of officials of the Ministries of Information and National Education.”

Pastor Nadarkhani described his actions as “the cry of a father, unjustly imprisoned.”  The letter also refers to the pastor’s 11-year legal battle to secure the right to education for children from the Persian-speaking Christian community.

Pastor Nadarkhani was initially arrested in his home city of Rasht on 13 October 2009 after questioning the Muslim monopoly on religious instruction for Iranian children.  He was acquitted of apostasy and released in September 2012, but rearrested in December 2012 on an administrative technicality before he was released again in January 2013.  In 2017, following a legal challenge mounted by the pastor, a judicial commission ruled his son Daniel could continue studying despite not having sat the Islamic studies exam.

On 13 May 2016 Pastor Nadarkhani was arrested once again, along with three other Christians. On 14 June 2017 they were given ten-year prison sentences by the 26th Branch of the Revolutionary Court in Tehran for “acting against the national security through propagating house churches and promoting Zionist Christianity.”

The four Christians were released on bail pending an appeal, but were informed on 2 May 2018 that the sentences had been upheld. They were subsequently arrested in a series of raids from 22-25 July 2018 and taken to Evin prison to serve their sentences.

CSW’s Chief Executive Mervyn Thomas said: “CSW is deeply concerned that Pastor Nadarkhani’s children have been denied access to education on account of their religious beliefs. Even more disturbing are indications that other second generation Christian children are experiencing similar difficulties.  This directly contravenes a Supreme Leader’s fatwa permitting children raised in Christian homes to access appropriate education.  We call on the Iranian authorities to rectify this situation by allowing Yoel Nadarkhani and other children facing similar discrimination to return to school, and providing Daniel Nadarkhani with the documentation necessary to enable him to enrol in university. We also continue to call for the immediate and unconditional release of Pastor Nadarkhani and all others from religious minority communities who are currently imprisoned for their faith.”

Daniel’s case was previously detailed in CSW’s Faith and a Future Report (page 33).

The author of this story, Michael Ireland, is a self-supported media missionary with ANS. Click here to support him as a missionary journalist.
October 1, 2019
FacebookTwitterPinterestEmail