Top Posts
There’s A Light That Enters Houses With No...
Knowing the One Who Always Keeps His Word
Pregnancy Resource Centers Fight For Life Amidst Opposition
This World is Not Our Home
Lessons Learned From a Gingerbread House
Let There Be Peace on Earth
‘I Wanna Dance’ movie: Whitney Houston’s success and...
Fact Finding, Sight Seeing, and Prayer Walking
Kidney donation led to 8 life-saving surgeries
The Power of Curiosity
Home Tags Posts tagged with "Pastor Ramon Rigal"

GUANTANAMO, CUBA (ANS) — Reverend Ramon Rigal and his wife Ayda Expósito were detained earlier this week in Guantanamo because of their refusal to send their children to government run schools. 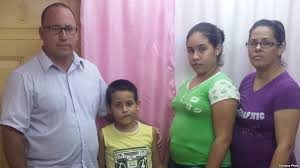 Pastor Ramon Rigal and his wife and family

According to Christian Solidarity Worldwide (CSW), the family, who belong to the Church of God in Cuba, were given 30 minutes notice before the trial began on 18 April, and went on throughout the afternoon but was then suspended until Monday 22 April.

Independent journalist Yoe Suarez reported in Diario de Cuba that in two previous judicial processes against Rigal and Expósito, “the prosecutor indicated that education at home is ‘not permitted in Cuba because it has a capitalist foundation’ and that only [the government] teachers are prepared ‘to instill socialist values.’”

CSW said Rigal and Expósito’s children are enrolled at a private Christian school located in Guatemala and have been completing their education online through a program offered by the school.

Rigal has stated that his desire to home school his children stems from his concern, as a Christian, about the role of Cuban schools in indoctrinating children in socialism and atheism.

CSW said Christian parents, especially those who work as pastors, report that their children are often singled out for ridicule or bullying by school administrators because of their religious beliefs. In Cuba there are no legal alternatives to state schools.

According to CSW, the trial of Rigal and Expósito comes at a particularly tense time for religious groups in Cuba following the adoption of a new constitution which weakened protections for freedom of religion or belief and which many religious leaders publicly opposed.

In recent weeks, CSW said, some the largest protestant denominations including the Methodist Church, the Evangelical League and the Eastern Baptist Convention have reported that they have been banned from receiving foreign visitors, in apparent retaliation for the formation of an independent Cuban Evangelical Alliance.

Over the past ten days, a number of pastors associated with the Apostolic Movement, including Pastors Alain Toledano and Marcos Perdomo, have been cited and interrogated by police. In Granma, a pastor with the Nazarene Church reported that he received notice on Thursday that the property where his church has been located for 20 years is being confiscated.

CSW’s Joint Head of Advocacy Anna-Lee Stangl said: “We are deeply concerned by the summary trial of Ramon and Ayda and the prospect that both may be facing significant jail time, leaving their children in the hands of the Cuban government. Numerous religious groups, including the Catholic Church, have repeatedly raised the issue of a lack of any options in Cuba when it comes to primary and secondary education, especially for parents who do not want their children be taught from a curriculum that aggressively promotes atheism, to no avail.

“Over the years, CSW has received numerous cases of children of pastors being bullied and ridiculed at school because of their religious beliefs, even to the point of causing serious psychological trauma. This is unacceptable. We call on the Cuban government to release Ramon and Ayda and to ensure that all children in Cuba are able to study free from harassment regardless of the religious beliefs of their family.”

Frances Martel, writing for Breitbart www.breitbart.com , said the Communist government of Cuba once again arrested Pastor Ramón Rigal and wife Ayda Expósito on Wednesday shortly before they had planned to leave the country. Rigal and his wife are at the forefront of an Evangelical movement against allowing the regime to educate their children.

Breitbart said Christian Solidarity Worldwide (CSW) confirmed the arrests Thursday but did not provide details on what prompted them, according to the Spain-based Diario de Cuba. The Home School Legal Defense Association (HSLDA), which had aided Rigal during a prior arrest in 2017, also did not have word on any formal charges, but noted that Rigal and his family had planned to leave Cuba after the government threatened them into exile.

Mike Donnelly, HSLDA Director of Global Outreach, said that Rigal had reached out to the organization after “he was told he is not welcome in his homeland, but when he tried to leave with his family [this week], authorities stopped him. Now he believes he will soon be sent to prison.”

“They handcuffed me and took me to the station, and they told me that the UN could not do anything for me,” Donnelly quotes Rigal as saying. “My children are nervous and sad. The police told me they were going to arrest the other [homeschooling] parents, too.”

Breitbart said HSLDA had reportedly purchased plane tickets for the family to depart shortly before the arrest. According to Rigal, however, police said they would not let him leave if he did not “condemn the other families who are homeschooling their children and to tell them to stop and put their children in school.”

“This I cannot do,” Rigal reportedly said.

The association is now urging President Donald Trump to intervene on their behalf.

Rigal, pastor of the Evangelical Church of God in Guantánamo, was arrested in 2017 for refusing to send his children to government-run schools, where the curriculum places a heavy emphasis on communist indoctrination and worship of Cuban Revolution murderers like Fidel Castro and Ernesto “Che” Guevara.

The government sentenced him to a year in prison, placed Espósito in house arrest, and prevented Rigal from making his case in court. The presiding judge in the case ruled that homeschooling was illegal because parents were not sufficiently skilled to “inculcate socialist values” in their children.

Breitbart sais that in addition to a heavy focus on Communist indoctrination, Cuban schools suffer from major shortcomings in educating children on basic life skills. The schools, the outlet Cubanet notes, boast “inept teachers, uninterested students, [and] desperate parents unsatisfied with what their children learn but have no money to fix the problem.”

An international campaign spearheaded by Christian aid organizations pressured Havana officials to free Rigal after two months and continue his work as a pastor despite the regime having previously stripped him of his title.

“This is a far better outcome than I had expected. Based on my understanding of how Cuba treats its dissidents, I was increasingly certain that Ramón was going to lose and go to jail,” HSLDA’s Donnelly wrote at the time.

Rigal’s second arrest appears to be a response not only to his children being homeschooled, but to Rigal popularizing the method among Guantánamo parents. An unnamed source told Diario de Cuba that Rigal “has spent over two years at the forefront of nine families who took their children out of state schools and began homeschooling.”

“They [the Cuban regime] told me I am a ringleader; I inspire others to follow my example. They told me that I am a rebel,” Rigal reportedly told Donnelly recently.

Breitbart states the Castro regime has persecuted Christians for decades and, despite a warm relationship with Pope Francis, continues to do so as dissidents flock to the faith. Evangelicals often face particular animosity as they tend to worship in more decentralized formats, making the faith harder to control.

In 2016, a year before Rigal’s arrest, the regime executed a pre-dawn raid on an Evangelical church in Camagüey, arresting the pastor and destroying the church building in its entirety.

“Everything that is independent or has nothing to do with the official government bothers them, they don’t like it,” the church’s Pastor Bernardo de Quesada Salómon lamented following the raid.

According to Breitbart, Catholics also face persecution if they use their faith to challenge Communism. The Ladies in White, one of Cuba’s most prominent dissident groups, attends Sunday Mass as its sole act of defiance. In response, Havana authorities have forced their local church to ban the women from attending services and beat, torture, and arrest the women on a weekly basis.

“Government security forces took measures, including detentions that were sometimes accompanied by violence, which inhibited the ability of members of the peaceful protest group Ladies in White to attend Catholic Mass.”