Top Posts
Pregnancy Resource Centers Fight For Life Amidst Opposition
This World is Not Our Home
Lessons Learned From a Gingerbread House
Let There Be Peace on Earth
‘I Wanna Dance’ movie: Whitney Houston’s success and...
Fact Finding, Sight Seeing, and Prayer Walking
Kidney donation led to 8 life-saving surgeries
The Power of Curiosity
When Love Came Down at Christmas
A Walk of Faith Begins with a Step...
Home Tags Posts tagged with "Pentecostal Christian"

LAHORE, PAKISTAN (ANS) — Morning Star News reports that a Pentecostal Christian with a mental disability in Pakistan has been arrested under the country’s blasphemy law after a Muslim neighbor outside his home overheard him arguing inside.

Morning Star News stated that Francis Masih, older brother of 42-year-old Stephen Masih, said that Muslim neighbor Hafiz Mudassir on March 11 burst into their home in Imranpura, Wadiala, Sialkot District, beat the younger brother and accused him of speaking ill of the prophet of Islam after overhearing an argument. 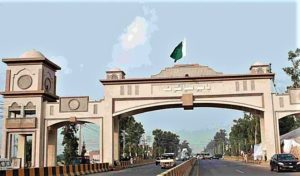 According to the Morning Star News report, Francis Masih said that at about 7 a.m.,  Stephen Masih, who belongs to a Pentecostal church, had become embroiled in a heated discussion with a Christian brother-in-law over fasting and praying during Lent when he lost his temper and started shouting loudly.

“This is when Mudassir barged into our house and started beating Stephen without any reason,” he told Morning Star News. “We told Mudassir that it was not right for him to intervene in our family issue, but he took offense and raised hue and cry in the street, alleging that Stephen had committed blasphemy.”

Soon a mob gathered outside their house, he said.

“Mudassir and Mohammad Rafiq, another neighbor, provoked them to attack Stephen,” Masih said. “They not only beat him up mercilessly but also attacked other family members who tried to save him.”

Someone called police, and they rescued Stephen Masih from the violent mob, he said.

“The police took my brother away, and it was after some time that we learned that he had been charged with blasphemy,” Masih said, adding that the family has not seen him since his arrest or heard about his condition. “We have been running from pillar to post, as we are very worried about his condition, especially since he was ruthlessly beaten up by the mob, but the police are not arranging our meeting. They keep telling us that he is safe and being taken care of.”

Their mother has not eaten enough or slept well since the arrest, he said.

“The police should show some mercy for the sake of my mother’s health and allow us a meeting,” Masih added.

Mudassir alleged in the First Information Report (FIR) registered at Badiana Police that he was standing outside his house when he heard Stephen Masih shouting derogatory words about Muhammad.

“I and another neighbor, Mohammad Rafiq, repeatedly asked Stephen to refrain from uttering blasphemous remarks, but he did not pay heed to our requests,” Mudassir said in the FIR. “This blasphemous act has caused immense agony to Muslims of the neighborhood, therefore Stephen should be punished as per the law.”

The FIR was registered under Section 295-C of Pakistan’s blasphemy law, which calls for the death penalty for defaming Muhammad.

The sub-inspector who registered the case, Mohammad Ashraf, told Morning Star News that police have yet to determine whether the accused’s mental capacity will be a factor.

“We are investigating the matter, but I cannot yet comment on the family’s claim that Stephen is mentally disabled,” he said. “It is up to the judge to decide once we present him in court.”

Francis Masih said his brother has been mentally disabled since birth, but that his condition worsened after the death of their father a little over 17 years ago.

“The entire locality knows about Stephen’s mental health status,” his brother said, adding that area residents used to tease him, provoking him into quarrels.

A doctor had advised them to admit him to a mental health facility, but their mother was unwilling to send him away, Masih said, adding: “And now we don’t even know where he is being kept and in what condition.”

Lahore High Court attorney Sardar Mohammad Akhtar told Morning Star News that Section 84 of the Pakistan Penal Code states, “Nothing is an offense which is done by a person who, at the time of doing it, by reason of unsoundness of mind, is incapable of knowing the nature of the act, or that he is doing what is either wrong or contrary to law.”

Intent must be demonstrated for a blasphemy conviction.

In analysis of Pakistan’s blasphemy laws, Morning Star News said the laws have long polarized public opinion, with intense emotions leading to assassinations of senior politicians and judges who have advocated for repeal. Critics within Pakistan and in the international community point to the malicious use of the laws to harm minorities, while advocates say the self-proclaimed Islamic nature of the Pakistani state mandates such laws to justify its existence.

Although the U.S. Commission on International Religious Freedom (USCIRF) has long recommended Pakistan be designated as a Country of Particular Concern (CPC), the U.S. State Department had never done so until last November. On Nov. 28, the United States added Pakistan to its blacklist of countries that violate religious freedom, the government announced on Dec. 11.

Pakistan ranked fifth on Christian support organization Open Doors 2019 World Watch list of the 50 countries where it is most difficult to be a Christian.