Top Posts
Colorado football coach Sanders’ unabashed faith
There’s A Light That Enters Houses With No...
Knowing the One Who Always Keeps His Word
Pregnancy Resource Centers Fight For Life Amidst Opposition
This World is Not Our Home
Lessons Learned From a Gingerbread House
Let There Be Peace on Earth
‘I Wanna Dance’ movie: Whitney Houston’s success and...
Fact Finding, Sight Seeing, and Prayer Walking
Kidney donation led to 8 life-saving surgeries
Home Tags Posts tagged with "police" 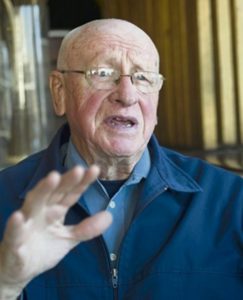 ORLANDO, FL (ANS)  George Floyd’s hideous death under a white policeman’s knee ignited worldwide protests against racism and police brutality.  The ongoing conflict prompted me to reflect on South Africa’s once-state-enforced racial oppression.  That apartheid regime’s top cop participated in the racist brutality, including bombings and attempted murder.  Yet his contrition and reconciliation efforts have been remarkable.  Lessons for today’s turmoil?

During the 1980s, conflict raged between South Africa’s white minority Afrikaner government and the black majority opposition.  From 1986 to 1991, Adriaan Vlok served as Law and Order Minister.  In 1998, Vlok confessed to South Africa’s Truth and Reconciliation Commission that in 1988 he had engineered the bombing of the headquarters of the South African Council of Churches, a prominent opposition group.  The bombing campaign included movie theaters showing Cry Freedom, an anti-apartheid film.

I had opening-night tickets to see Cry Freedom in Pretoria, but the screening was cancelled.  The next morning, a bomb was discovered in that theater.

You may imagine my interest when BBC television told of Vlok’s 2006 attempt to reconcile personally with Rev. Frank Chikane, former head of the South African Council of Churches, the group whose headquarters Vlok had bombed.  Chikane said Vlok visited his office and gave him a Bible with this inscription:  “I have sinned against the Lord and against you, please forgive me (John 13:15).” 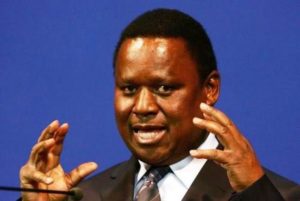 May I wash your feet?

That biblical reference is Jesus’ Last Supper admonition that his disciples follow his example and wash one another’s feet.  The inscription’s words echo those of the Prodigal Son who – in the famous biblical story – admitted to his estranged father, “I have sinned against heaven and against you.”

Chikane said Vlok “picked up a glass of water, opened his bag, pulled out a bowl, put the water in the bowl, took out the towel, said ‘you must allow me to do this’ and washed my feet in my office.”  Chikane warmly accepted the gesture.

In the years since, Vlok has related more about his racist past and his change.  In 2014, he described for The New Republic his apartheid-era convictions about his opponents: “[W]e were fighting a just cause. And they are fighting the wrong cause. So I will fight you. I will resist you. And if necessary, I will kill you.” 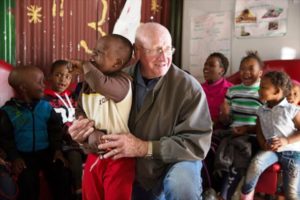 While grieving his wife’s 1994 suicide, Vlok was deeply touched by the kindness of some followers of Jesus.  It appears they helped him to know God personally.  He began reading the Bible.  Jesus’ guidance to make things right with those we’ve wronged prompted his meeting with Chikane.  In that encounter, he became aware of – and dismayed by – his own feelings of superiority.

“I regarded myself as better than black people,” he realized. …”And it is wrong! …It is not so! I saw that I’m not better than they are.”  He told the BBC, “lovelessness was the root evil in apartheid. …I’m trying to obey” Jesus’ instruction “to love your brother and your sister.”

His new humility and love led to more footwashings of apartheid victims.  He devoted himself to charity work, collecting and delivering food to black township preschools.

Vlok believes his wife’s tragic suicide helped him realize his needs: “You have to be brought to nothing before change begins.”

Of course, Vlok still has his detractors.  Some maintain he’s not admitted all his sins.  Others view his faith story as an image polisher.  But South African president Thabo Mbeki found his Chikane footwashing impressive:  “I was deeply moved that an elderly Afrikaaner, with Adriaan Vlok’s history and pedigree, could speak as he did and break with his past in the manner he has.  …[T]he gesture was from a committed Christian, who said that if Jesus Christ could do it, he could also.”