Top Posts
Knowing the One Who Always Keeps His Word
Pregnancy Resource Centers Fight For Life Amidst Opposition
This World is Not Our Home
Lessons Learned From a Gingerbread House
Let There Be Peace on Earth
‘I Wanna Dance’ movie: Whitney Houston’s success and...
Fact Finding, Sight Seeing, and Prayer Walking
Kidney donation led to 8 life-saving surgeries
The Power of Curiosity
When Love Came Down at Christmas
Home Tags Posts tagged with "Polyarteritis nodosum"

INDIANAPOLIS, Indiana (ANS) — News anchor Scott Swan had just powered through another midday newscast for WTHR in Indianapolis on April 26, 2017.

But now, he could no longer ignore the pain that had plagued him for days. 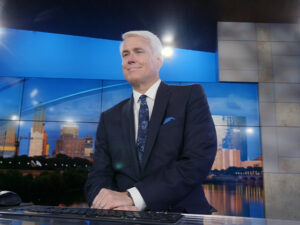 Scott remembers, “I went into the bathroom and felt very clammy. I felt light-headed. I just felt this enormous pain down in my stomach. And just knew that, you know, this was getting worse. Progressively worse.”

According to the 700 Club Daily News Scott’s wife Janae’ was in Mexico on business when he texted her the pain had gotten worse.  Janae’ says, “And that’s when I finally shot him the text, all caps, you know, ‘Go to the doctor today’. I just knew he wasn’t getting better and he needed to go.”

“I don’t know if I felt fear, I just felt pain. And – I just wanted the pain to go away,” said Scott.

Still, he waited until after work to check into an emergency room near his home.  After finding Scott’s blood pressure dangerously low, doctors ordered a CAT scan.

700 Club Daily News reported Vascular surgeon, Dr. Randy Irwin was home when he got a frantic call from the ER doctor. He recalls, “And he had called me even before Scott got out of the CAT scanner and found that he was bleeding into his belly. He was barely hanging on to consciousness. We knew he was bleeding to death, but we didn’t know why.”

What they did know was that Scott needed surgery… as soon as possible.

Dr. Irwin continues, “I immediately tried to get him flown down to the big hospital at St. Vincent’s on 86th Street, but we couldn’t do it because of an impending storm coming in, so we had to bring him down by ambulance, even though his blood pressure was kind of between 60 and 80. I would put his statistics at dying on the way down to see me probably at around 70, 80%.”

Meanwhile, Janae’ was trying to get a flight home from Mexico. With spotty cell service, all she knew was that Scott had checked into an ER, but now need to be transferred to another hospital.  Janae’ recalls, “I had no idea, really the severity of what was going on. I’m not getting information. It was very hard to communicate. And I just could – I was stuck. I couldn’t leave. All I just want to do was sit and pray and like, I was just – I guess distraught is the only word I can think of.”

But Scott, now in a 30-minute ambulance ride and running out of time, was having a much different experience.

Scott said, “I don’t remember feeling the pain at that point. I just knew that – I sensed that God was with me. And while I couldn’t speak and I couldn’t open my eyes, I felt God’s peace in the back of that ambulance.”

700 Club Daily News said by the time Scott arrived at Saint Vincent’s Hospital, Dr. Irwin was waiting and had him wheeled straight into the OR he had been receiving updates on Scott’s condition.  Dr. Irwin says, “His blood pressure was very low. At one time it was down to the 50s, and when it gets that low, it’s hard to get enough blood flow to your brain. And he lost a lot of blood. I would say he probably lost two or three liters of blood.”

At once Dr. Irwin tried to locate the bleeding artery using a catheter.  Instead, he made a startling discovery. He recalls, “It looked like Scott had stopped bleeding. It stopped on its own. But we could clearly see some arteries inside there that were not normal. And then after that we kind of stopped everything.”

As surgery was no longer needed, Dr Irwin sent Scott to intensive care.  The next day he inserted a coil into Scott’s artery to prevent further bleeding.  Having finally found a flight home, Janae arrived at the hospital later that same day. Slowly, the details of Scott’s brush with death began to unfold. Janae’ recalls, “He was in ICU at that point and I just ran into the room and I was so glad to see him. He’s been my best friend for almost forty years. And it just really hit me how close he was to dying.”

After 12 days Scott went home.  By then doctors had discovered he had a rare auto-immune disorder that attacked the arteries around his stomach.  It could be controlled by medication, but some things call for another explanation.

Dr. Irwin said, “He’s had no other complications, and his CAT scans recently have shown that the arteritis or polyarteritis nodosum has completely gone away. And I think there’s no doubt that if Scott didn’t stop bleeding on his own, that he probably would have died before he got down here to see me.”

Scott said, “To me, there is no good medical explanation to why that artery sealed, and why I stopped bleeding.  As a Christ-follower, I believe God healed me.”

700 Club Daily News said Scott and Janae say this experience has revealed God’s power to them in ways they’ve never seen before.

Janae’ said, “I know that the Lord takes something and just makes it better, and that’s what He’s done with this situation, by creating a miracle, saving him, and now for him to have a platform like this to go and spread the good news, and to encourage others.”

Scott concluded: “You know, I read through scriptures, ‘God is my rock, God is my fortress, God is my healer.’ Those were just words before. But I’ve experienced all of those firsthand. God IS my healer. God IS my Savior. He IS my God of miracles. I want people to know that whatever you’re going through in life, that God is with you.”