Top Posts
Colorado football coach Sanders’ unabashed faith
There’s A Light That Enters Houses With No...
Knowing the One Who Always Keeps His Word
Pregnancy Resource Centers Fight For Life Amidst Opposition
This World is Not Our Home
Lessons Learned From a Gingerbread House
Let There Be Peace on Earth
‘I Wanna Dance’ movie: Whitney Houston’s success and...
Fact Finding, Sight Seeing, and Prayer Walking
Kidney donation led to 8 life-saving surgeries
Home Tags Posts tagged with "‘Pray and Serve’"

LAHORE, PAKISTAN (ANS – Oct. 31, 2018) — Christians on the ground in Pakistan tell Open Doors USA partners that they are calling on their fellow Christians across Pakistan to pray and offer themselves for public service as violent protests break out in the wake of the Pakistan Supreme Court’s astounding acquittal of Asia Bibi, a Christian woman wrongly imprisoned there for more than eight years on Islamic charges of blasphemy.

“We call on Christians across the country [Pakistan] and around the world to pray and proclaim, to demand our right to justice but to do so in a manner befitting Christians committed to being imitators of Christ. Do not destroy property, do not violate people, do not fall into the trap of violent and aggressive behavior,” sources told Open Doors. 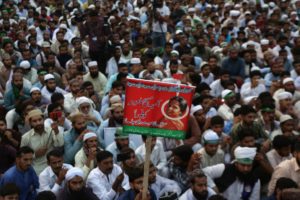 “In response to this verdict, please hold back from making any comments that could be used against you. These [hardline Islamic] groups are on high alert and will be watching for any way to increase the pressure against Aasiya [Asia Bibi], Christians and the Church. Let us strive to demonstrate restraint, [as] no use of aggression or physical violence can make up for our loss as a nation and a community. …As a praying people, let us trust God and ensure that we demonstrate Him and His Good News at this time.

“Let us be compassionate to those who mourn and suffer at this time, and let us be prepared with our resources to serve this nation [Pakistan] at a time when a blood bath could easily occur. Be willing to become a public care servant, to demonstrate God’s desire for justice, mercy and humility. If you are a Pakistani and have medical skills or social work skills, be willing to use them. Be watchful, vigilant and calm. God be with us all. To Him be all the Glory.”

David Curry, president and CEO of Open Doors USA, an organization that has supported persecuted Christian minorities for more than 60 years, offered additional context to the tenuous situation: “Pakistan is a highly tense climate for religious minorities, especially Christians who live in fear of persecution and attacks to themselves and their property. As this verdict is released, it is imperative that the government of Pakistan and its Supreme Court be on alert to protect against violence threatened by Khadim Hussain Rizvi and his followers.

“We call upon law enforcement agencies to beef up security and deploy military troops as needed to safeguard the lives and property of all religious minorities. Now is the time for Pakistan to send a message that the hate speech and threatening actions of Tehreek-e-Labbaik Pakistan and all similar extremist groups will not be tolerated. Religion should never be used as a tool to promote violence in society.”

Pakistan is No. 5 on the 2018 Open Doors World Watch List of the 50 countries where it is most difficult to live as a Christian. Much of the Christian persecution in Pakistan comes from radical Islamic groups that flourish under the favor of political parties, the army and the government. These radical Islamic groups run thousands of Islamic education centers where youth are taught and encouraged to persecute religious minorities like Christians.

The Supreme Court in Pakistan earlier today acquitted Asia Noreen, also known as Asia Bibi, who has been on death row since 2010 after she was falsely accused of blasphemy in 2009.

Christian Solidarity Worldwide reported the detailed 56-page judgement delivered by the Pakistan Supreme Court on October 31 reverses the earlier decisions by the High Court and Trial Court and affirmed that the state must ensure that no innocent person is compelled to face an investigation or a trial on the basis of false or trumped-up allegations of committing blasphemy.

The court further noted there were a number of material contradictions and inconsistent witness statements in Asia Bibi’s case which cast doubt on the evidence, and that the prosecution “has categorically failed to prove its case beyond reasonable doubt.” The judgement also acknowledged that the blasphemy laws have been misused to level false allegations.

CSW’s Chief Executive Mervyn Thomas said: “CSW welcomes the news of Asia Bibi’s acquittal and we call on the government of Pakistan to ensure that appropriate steps are taken to ensure the safety of Asia Bibi, her family, the Christian community and all involved in her case following explicit threats from certain extremists groups in the country.  \

“The false allegation of blasphemy against Mrs Bibi highlights the blatant abuse of Pakistan’s blasphemy laws that have been used to harass and intimidate religious minorities and Muslims alike. In light of this judgement, we call on the government to implement much needed procedural amendments to prevent further misuse of the laws.”

Mrs Bibi was falsely accused of blasphemy in June 2009. At the time she was working in a field when an argument took place between her and two Muslim colleagues, Mafia Bibi and Asma Bibi, over fetching water. Mrs Bibi offered the women water but they refused because she is a Christian. The women, in collusion with a local cleric, Qari Muhammed Salaam, fabricated a story and filed a first information report (FIR) with the police five days later in which it was alleged that Mrs Bibi had made blasphemous remarks against the Prophet Muhammed.

In 2011, Shahbaz Bhatti, Pakistan’s first Minister for Minorities Affairs and Salmaan Taseer, the former governor of Punjab province, were assassinated after speaking out on Asia Bibi’s case. On October 16, 2014, the High Court dismissed her appeal and upheld the death sentence. On July 22, 2015, the Supreme Court suspended Mrs Bibi’s death sentence for the duration of the appeals process.

Her final appeal in the Supreme Court, due to take place on October 13, 2016, was adjourned after one of the three-judge bench, Justice Iqbal Hameed-ur-Rehman, recused himself citing a conflict of interest in the case of Salmaan Taseer, former Governor of Punjab. The Supreme Court hearing was rescheduled to October 8, 2018, when the special three member bench reserved judgement with a warning to media to desist from commenting on the case until the court issued its detailed judgement.

Ms Michelle Chaudhry, President of the Cecil & Iris Chaudhry Foundation (CICF), said: “There is no doubt that the rule of law has been upheld and justice has prevailed. However, unfortunately an innocent woman has had to lose nine precious years of her life; she and her family have had to endure extremely traumatic circumstances for a crime that was never committed. This in itself demands for the authorities to look into or revisit Pakistan’s blasphemy laws and take concrete measures to curb their misuse.”

CSW is concerned by reports that Islamist groups have started to gather in cities across Pakistan to stage demonstrations against Mrs Bibi’s release. CSW’s sources report that due to rising tensions there is heavy police deployment in Islamabad and Lahore, with additional security positioned near churches and Christian schools.

One Islamic political party, the Tehreek-e-Labbaik Pakistan (TLP), had previously issued threats warning of severe consequences towards all involved if Mrs Bibi was released. Party members and their supporters are converging on cities including Karachi, Lahore and Islamabad and have begun to protest and block major roads.