Top Posts
Colorado football coach Sanders’ unabashed faith
There’s A Light That Enters Houses With No...
Knowing the One Who Always Keeps His Word
Pregnancy Resource Centers Fight For Life Amidst Opposition
This World is Not Our Home
Lessons Learned From a Gingerbread House
Let There Be Peace on Earth
‘I Wanna Dance’ movie: Whitney Houston’s success and...
Fact Finding, Sight Seeing, and Prayer Walking
Kidney donation led to 8 life-saving surgeries
Home Tags Posts tagged with "Prisoners Freed"

COCONUT CREEK, FLORIDA (ANS) — In developing countries, such as Haiti, the punishment doesn’t always fit the crime, like being sent to prison for taking low-hanging fruit to stave off hunger pains.

That’s what happened to Noreus, 31, a husband and father of seven, according to Food For The Poor, which this week paid the fines of nearly 200 non-violent prisoners, freeing them in time for Holy Week. 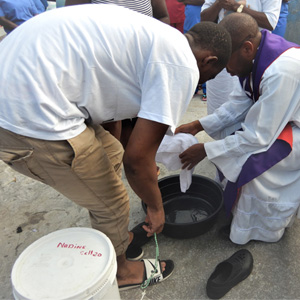 Father Leon washes the feet of one of the freed prisoners

Noreus was one of 184 men and women freed during Holy Week. The Food For The Poor Prison Ministry Program started in 1998 to help nonviolent offenders in parts of the Caribbean and Latin America who could not afford to pay their fines to get out of prison. Thanks to generous supporters, the blessing continues.

According to Food For The Poor, there are 17 prisons in Haiti, some are better than others, citing the World Prison Brief. The prison in Port de Paix is overcrowded and is in dire need of repair. The inmates and staff have decrepit bedding, the walls are crumbling and its dirt floor kitchen is in very bad shape.

“The bananas were on my side of the fence of my house, so I decided to take a few to feed my children,” Noreus said. “Unfortunately, the owner was unhappy and called the police and got me arrested. So I had to leave my children at home with their mother, who had difficulty providing for the family alone.”

Noreus served more than two years in the Port de Paix prison for lack of money to pay his fine. He was extremely thankful when he learned he was one of nine men being released for Easter, thanks to the Food For The Poor Prison Ministry Program.

“For my release today, I want to thank the entire Food For The Poor team and also the donors,” Noreus said. “I also want to say thank you for the food distribution, which will help me go home with some food for the children.”

“Prison time isn’t expected to be easy, but lockup in a country in crisis can be practically inhumane,” said Food For The Poor President/CEO Robin Mahfood. “This organization is committed to helping as many people as possible, including prisoners who are often forgotten or considered unworthy because of their past offenses.”

CEPUDO oversees Food For The Poor’s projects in Honduras, where 10 men and one woman were released from the Privados de Libertad Para Conmuta Pastoral Penitenciaria en El Progreso after Food For The Poor paid their fines.

“We appreciate the year-after-year support we receive from Food For The Poor and CEPUDO, since there are few organizations that contribute to the benefit of the prisoner and their reintegration,” said Zobeida Mendoza, Coordinadora Pastoral Penitenciaria.

Six men in Guyana were freed from the Lusignan Prison on the east coast of Demerara, which has a violent reputation.

This was the environment in which 35-year-old Olin found himself. He was arrested for a traffic violation and sentenced to six months, because he did not have the $65,150 Guyanese dollars or $314 U.S. dollars to pay his fine. His six months easily could have turned into years, if Food For The Poor had not become involved.

All six men expressed gratitude to the Food For The Poor-Guyana staff and Mahfood during a conference call, but Olin felt his words of thanks were inadequate.

“I want to give back,” Olin said. “I want to come back during Christmas and speak to prisoners and advise them to stay out of trouble. I want to encourage them like I’ve been encouraged.”

One of the men released from Tower Street is a 23-year-old construction worker. He said, while working at a supermarket his cell phone fell and the screen broke. A co-worker loaned him a cell phone until the one he had was repaired. He didn’t know it, but the loaner phone was stolen. He was arrested and fined $50,000 Jamaican dollars or $390 U.S. dollars.