Top Posts
Knowing the One Who Always Keeps His Word
Pregnancy Resource Centers Fight For Life Amidst Opposition
This World is Not Our Home
Lessons Learned From a Gingerbread House
Let There Be Peace on Earth
‘I Wanna Dance’ movie: Whitney Houston’s success and...
Fact Finding, Sight Seeing, and Prayer Walking
Kidney donation led to 8 life-saving surgeries
The Power of Curiosity
When Love Came Down at Christmas
Home Tags Posts tagged with "Publishing Training Seminars"

COLORADO SPRNGS, Colorado (ANS) —  Dr. Tamara J. Welter is associate professor of journalism at Biola University and is a trainer for Magazine Training International (MTI) https://magazinetraining.com  which holds training seminars in publishing in the Third World. 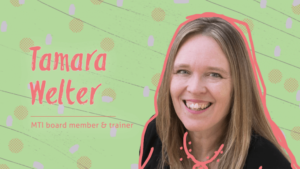 Tamara Welter teaches at Biola and has teamed with Magazine Training International.

Welter recently wrote about her experience with MTI in Kenya, where she met Hulda, whose job is to produce publications to bring hope across war-torn Africa.

Welter said: “Hulda squeezed her face in close to mine as she held up her phone to take a photo. She and several members of her church had traveled from the Dominican Republic of Congo (DRC) to Kenya to attend the first MTI training for publishers in Africa. Hulda was a part of the design training track for which I served as a trainer.”

Welter writes that she later met some of Hulda’s team members and heard stories of the disease, abduction, and murder they and others in the DRC faced regularly.

“One team member who works with young boys who escape from enslaved child soldiering believes that ministry through media can spread peace and hope across the Congo. Hulda’s job is to produce publications that do just that,” Welter said.

Welter continued: “Early in my professional career, I found myself volunteering as photographer and designer with a ministry that trained pastors in various places around the world.

“I’ve always believed global ministry should be collaborative, with members of Christ’s body from all vocations and from everywhere around the world, coming together to further the Gospel mission. I’ve brought this same philosophy into my teaching at Biola University, believing the work that our students do as journalists and media professionals can contribute to Kingdom ministry and to the impact on the world for Jesus.”

When Welter learned of the ministry of Magazine Training International several years ago, she was quickly ignited by its mission.

“As I was looking for ways to connect myself and my students with their mission, I was asked to travel with MTI to Kenya for their first training on the continent of Africa. I knew I needed to contribute, but I didn’t know what to expect of the training. MTI’s materials appeared to be of very high quality, but I had never seen the organization at work.”

Welter said she believes in ministry and that God is able to use any willing vessel to accomplish His will. “But, I struggle when ministries lack excellence in the presentation of their material and their brand. My experience in Kenya with MTI and their community of trainers was far from mediocre. I was very impressed with the caliber of trainers as well as the quality of the international publishers who attended the training.”

Welter said trainers from major organizations and publications were volunteering their time and finances to contribute to the mission. And, publishers from across the continent of Africa (and beyond) came eager to learn and grow the missions and ministries of their publications. “It was one of the most amazing experiences I have had where my profession connected so intentionally with the passion of ministry, and at such a high-quality level.”

She continued: “Our days were long and the work was exhausting. But, the level of excellence these publishing professionals desired to achieve through their training inspired me and my fellow trainers.

“That time in Kenya solidified my commitment to the ministry of MTI. I was later invited to join their board; and even though I am stretched professionally and personally, I felt this was a call to which I needed to respond.

“I believe in the mission and vision of MTI and I want to bring my skills to help the organization thrive. As new avenues of communication emerge, I want to see MTI on the front-lines, training Christians to take advantage of those new media in order to reach their communities with the message of the Gospel.”

She added: “When I returned home to southern California, my son sent me a text with a photo attached. It was a picture of him (a white, young man) at work with a black man. He said, ‘This is Hulda’s uncle.’ I was confused—and in awe. Hulda had posted the photo of the two of us to her Whatsapp account. Her uncle, who had only recently stepped out by faith to come to Biola University, was assigned to work with my son in the cafeteria for the first time. It was just the two of them, late at night, making pizzas for the next day. As they chatted, the story emerged. God was weaving our worlds together and confirming in our hearts his mission, his heart for Congo and for Africa.”

Welter concluded: “Hulda’s uncle is now a mentor to my son. And, I am more than ever humbled to serve a great God and honored to do so through MTI.”

Magazine Training International (MTI) will head to Ghana in September 2021 to host a series of professional training events for Christians in magazine publishing. If it is possible to gain reliable Internet access for streaming, MTI plans to offer a virtual training event simultaneously. Although MTI has offered online training since 2014, this will be the first attempt to combine virtual training with an on-site experience.

The five-day Introduction to Magazine Publishing Course will be followed by a one-day limited-enrollment Hands-on Magazine Startup Workshop designed to give practical help to participants as they make plans to start a new magazine or restart an existing one. Participants in the course will receive the 240-page “Introduction to Magazine Publishing” coursebook.

The conference will conclude with a four-day Digital Publishing Workshop, where participants will learn strategies for publishing online and gain the tools they need to be successful.

Training events will be presented in English, but because Ghana is surrounded by Francophone countries, simultaneous interpretation in French will be available. The course book is also available in French.

An international team of 10 trainers will present at the three events.

MTI provides professional development opportunities to Christians in publishing in less-resourced areas of the world. The conference in Ghana is the third training event in MTI’s 10-year training program for Africa. Prior conferences were in Kenya in 2018 and Côte d’Ivoire in 2019.