Top Posts
Pregnancy Resource Centers Fight For Life Amidst Opposition
This World is Not Our Home
Lessons Learned From a Gingerbread House
Let There Be Peace on Earth
‘I Wanna Dance’ movie: Whitney Houston’s success and...
Fact Finding, Sight Seeing, and Prayer Walking
Kidney donation led to 8 life-saving surgeries
The Power of Curiosity
When Love Came Down at Christmas
A Walk of Faith Begins with a Step...
Home Tags Posts tagged with "Reclaiming Lives"

MINNEAPOLIS, MINNESOTA (ANS) – When Joan Treppa heard the tragic story of Wisconsin paper mill worker Tom Monfils, her highly-developed sense of injustice, her faith, a sense of call to write, and her own experience of being bullied all came together in the book “Reclaiming Lives, Pursuing Justice for Six innocent Men,” ©2017 Mill City Press, Inc.

Treppa is a social justice advocate whose focus is to create awareness about wrongful convictions. She’s a voice for the five Wisconsin men currently fighting for their freedom. 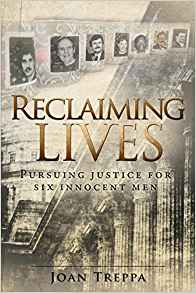 In 1992, the death of mill worker Tom Monfils, and the resulting trial of six men accused of his murder, shocked the Wisconsin community in which it occurred.

In an interview with ASSIST News, Treppa said: “People often tell me I sound like a lawyer when I share my passionate discourse for those who’ve experienced grave injustices within our criminal justice system.

“In fact, I am not a lawyer. I have no legal background whatsoever…only a fierce determination to help correct one injustice that found its way to me,” she said.

“Aside from the unfairness of how the entire case was handled, an underlying message that jumped out for me while learning about the situation was an element of bullying. I experienced bullying throughout my childhood. In this instance bullying became the most disturbing aspect of how innocent people had been victimized and punished unjustly.

“Traumatic personal memories of the anger, the hurt from being ostracized to the point of feeling shame and self-pity, returned. A calling was borne out of the remnants of those painful experiences and I could not turn my back on individuals caught up in this highly-publicized situation that completely destroyed their lives and sent innocent people to prison for a crime they did not commit. In essence, I became one of many who were chosen to broadcast the real truths about this injustice, to reveal all that was lost in the controversy, the cover-ups, and the politics.”

Treppa described the synopsis of the case that prompted the book.

In November of 1992, paper mill worker, Tom Monfils, made a 911 call to report an impending theft within the mill by fellow mill worker, Keith Kutska. As a result, Kutska was suspended from work but learned of the 911 call during a disciplinary hearing. Afterward, Kutska made known his intent to find out who made the call and to obtain a copy of the recording.

“The police department handed over a copy to Kutska despite repeated (undocumented) calls from Monfils asking them not to. Kutska then confronted Monfils at work with the tape the following week,” she said, adding: “Soon after this confrontation, Monfils disappeared from his work station and was found the next day at the bottom of a paper pulp vat inside the mill with a rope and weight tied around his neck.”

Treppa continued: “Early in the investigation the police were told by those who worked with Monfils that he had committed suicide. But then the police learned of the police department’s critical error of releasing a copy of the tape to Kutska,” said Treppa.

“They also learned about the confrontation between Kutska and Monfils. The focus of the investigation then became more aggressive with the intent to prove this was a homicide. Kutska became their lead suspect.”

In 1995, the two-and-a-half year investigation essentially produced no solid evidence or credible eyewitnesses, said Treppa. “Despite this, a twenty-eight day joint trial ended with six men, including Keith Kutska, Reynold Moore, Dale Basten, Michael Johnson, Michael Hirn, and Michael Piaskowski, being charged with first-degree intentional homicide. Each was given a life sentence.”

Treppa acknowledged some similarities to her own life story.

“For a significant period in my life, I was robbed of my individual voice, my dignity, and sense of self,” she said. “The same happened here. But what helped me to overcome those traumas was the generosity, the kindness I received from good people who entered my life from time to time.

“Overwhelming emotions propagated my sense of duty and commitment to help these men and their families, the same way I had been helped. I felt adequately well-equipped to stand tall for them. As hurtful as it was to remember the helplessness of being made fun of incessantly, being a target of repeated name calling, and being held accountable for wrongs I had no part in committing, the empowerment I felt was even greater.”

What was it about the case that drew her interest? What is now the current state of the case and the men involved?

Treppa said becoming an advocate and an author was an unexpected deviation from all of the things that had since kept her life simple and brought great joy and satisfaction.

“My faith allowed me to believe in something larger than me. It allowed me to make a difference in that something. And it expected me to figure out how that was going to happen. Ironically, taking this new path revealed an emptiness that was stagnant for many years. Taking a stand on their behalf did two things; it gave the recipients hope while helping me to heal on an emotional as well as spiritual level,” she said.

To date, three of the six men are free. In 2001, Michael Piaskowski was exonerated by a federal judge who found no evidence of guilt against him. Dale Basten was released in 2017 due to health issues. Sadly, he died nine months later. Michael Hirn was granted parole in 2018 while maintaining his innocence. It is expected that Michael Johnson and Reynold Moore will be released on parole in 2019.

“The battle for Keith Kutska’s release is ongoing, but uncertain. To this day, all of the men have maintained their absolute innocence,” Treppa said.

Petitioning for the immediate release for the remaining incarcerated men was the main focus of her book.

“I’m ecstatic that the Parole Commission has started to grant parole to these men without asking them to admit to a crime they did not commit,” she said.

“The untold story, the aftermath, the dire challenges forced upon the men and their loved ones, and the telling of the many miracles that occurred along the way was also an important aspect.”

Treppa stated: “In the process, it was necessary to highlight the specific flaws of this case, and to enlighten those unaware of the realities and common flaws that are present in all wrongful convictions. Pointing out the shortfalls of the media outlets in that region has had an effect as well, as some have begun to look deeper into the details of this case and are questioning the validity of the police theory and the verdicts.”

Treppa hopes to inspire others to embrace their own personal callings with the belief that goodness exists if we only take the time to look, and that it is as infectious as bad behavior.

Treppa said the idea that wrongful convictions can and do happen…anywhere, to anyone, and with absolutely no warning is her-hoped for takeaway for readers.

“My greatest legacy will be realized when what I’ve written has touched hearts in the deepest sense and has motivated many to overcome their own barriers to help others.

“I wish for everyone to find that singular connection that compels them to help improve lives, and to understand why some lack the ability and/or resources to help themselves,” she said.

Treppa concluded: “When we begin to abandon judgement and make a conscious effort to embrace the difficulties of others, we contribute to the kind of place where we’d all like to live. I believe that education is an important safeguard that will ultimately prevent more wrongful convictions from happening in the future.”

“Reclaiming Lives,” is available on Amazon.com