Top Posts
Pregnancy Resource Centers Fight For Life Amidst Opposition
This World is Not Our Home
Lessons Learned From a Gingerbread House
Let There Be Peace on Earth
‘I Wanna Dance’ movie: Whitney Houston’s success and...
Fact Finding, Sight Seeing, and Prayer Walking
Kidney donation led to 8 life-saving surgeries
The Power of Curiosity
When Love Came Down at Christmas
A Walk of Faith Begins with a Step...
Home Tags Posts tagged with "Rectof or All Souls Langham Place"

Rectof or All Souls Langham Place

Rev Bewes was an influential Christian leader in the UK throughout his life. He was the rector of All Souls from 1983 until his retirement in 2004. Bewes also served on the Church of England Evangelical Council in the 1990s and was on the British Board of the Billy Graham Evangelistic Association for much of his life.

Church leaders have paid tribute to his life and ministry. 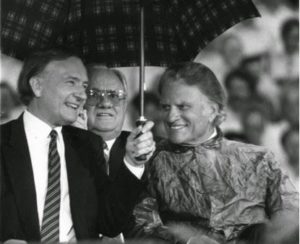 Rev Bewes was a good friend of Dr. Billy Garham

Premier Radio said Bewes, who was born and raised by missionary parents in Kenya, made a confession of faith as a teenager, partly under the influence of church minister John Stott, who would continue to be a mentor to him during his undergraduate years and as one of his predecessors at All Souls.

After studying at Cambridge University, he trained for ordination at Ridley Hall, Cambridge, and was ordained to ministry in the Church of England in 1959.

Bewes continued to be passionate about Africa and was involved in raising up and training church leaders there through Africa Enterprise.

According to Premier Radio, Bewe’s ministry also took him to various other parts of the world to teach and preach, as well as composing hymns and writing 20 books, including his most recent ‘Under The Thorn Tree’ (Christian Focus), which recalls his early life in Kenya and his vision for revival in the UK church.

Bewes was a friend and colleague of the international evangelist Billy Graham and chaired Billy’s Greater London Mission in 1989. He was present as a teenager at many of Graham’s early evangelistic rallies in the UK in the 1950s, which he described as having had a life-changing impact on him.

Bewes was awarded an OBE by the Queen in 2005 for services to the Church of England.

A keen photographer and tennis fan, he was frequently to be found at Wimbledon during the championships. He is survived by his wife Pam Bewes, whom he married in 2012, both of them having known earlier bereavements.