Top Posts
Knowing the One Who Always Keeps His Word
Pregnancy Resource Centers Fight For Life Amidst Opposition
This World is Not Our Home
Lessons Learned From a Gingerbread House
Let There Be Peace on Earth
‘I Wanna Dance’ movie: Whitney Houston’s success and...
Fact Finding, Sight Seeing, and Prayer Walking
Kidney donation led to 8 life-saving surgeries
The Power of Curiosity
When Love Came Down at Christmas
Home Tags Posts tagged with "Red Hand Files"

This Much He Knows to Be True: Nick Cave

Nick Cave is an anomaly. 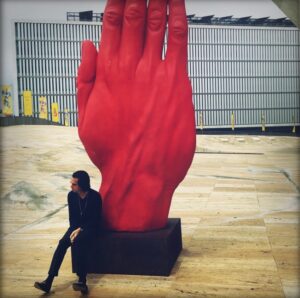 In interviews Cave professes no religious affiliation, but states Christ is one of his heroes, “reacquaint [ing] myself with Jesus,” as he told CNN.  He’s not a clergyman, but provides deep, thoughtful advice to millions of people around the world through his Red Hand Files.  In the Files he addresses theological topics such as determinism (predestination in Christian terms) and other similar themes.  Many of his answers are quite moving.  As an example: In Issue #87, Cave answers the question, “What is your favorite moment from the Bible.”  Cave’s reply? The death of Christ.  Here’s the excerpt:

“When Jesus was taken down from the cross, his body laid in a tomb and a stone rolled across the entrance, his twelve male disciples essentially fled. Mary Magdalene did not. In Matthew 27:61 it says —

“Mary Magdalene and the other Mary remained standing there in front of the tomb.

“I think this haunted single sentence is probably my favourite moment from the Bible.”

To say the least, Cave—like the author he loves, Flannery O’Connor—is Christ haunted.  Jesus shows up everywhere in Nick Cave’s world, in songs, documentaries, books, and in his art.

So, it’s no coincidence that the new concert documentary, directed by  Andrew Dominik,  This Much I Know I To Be True—a Fathom Production in the US—opened with religious connotations:  the redemption of the devil.  Whether Cave’s devil has any association to a religious book or is a metaphor for Cave himself, we can only guess.  After a tongue-and-cheek profession, saying he’s now a ceramicist, Cave introduces the ceramic pieces (Cave is an artist, though he’s not fond of the term, creating new works—from drawings to photographs—on a regular basis).   The ceramic works of art portray the life of the devil. The final work shows a small child forgiving the fallen foe. Cave doesn’t designate the child as Christ, but one can only guess. What we don’t need to guess is that Cave is a man infatuated by the Bible. 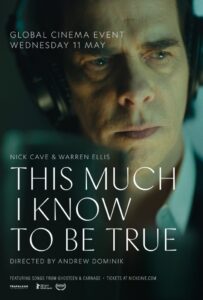 I won’t get into Cave’s long association with the Bible, many have written about it, with books on the topic penned, such as Roland Boer’s Nick Cave: A Study of Love, Death, and the Apocalypse.

If one thing is clear in This Much I Know To Be True it’s that Cave is a calmer man, at home in his skin.  Rather than just a rock star or writer (he’s written a couple of novels and books of poetry), he sees himself as a “father, a husband, and citizen”—things very revealing to his current state of mind. This Much I Know To Be True is a marvelous portrayal of men (it highlights his musical writing partner, Warren Ellis, as well) at the top of their craft; humans creating transcendent, beautiful—and at times, jarring—music.

And Cave knows a thing or two about a jarring life.  He’s a man who’s dealt with many life-blows:  heroin addiction, bad relationships, and the death of two of his sons, one in May 2022. 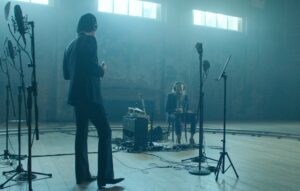 Nick Cave and Warren Ellis in ‘This Much I Know To Be True’. Credit: Still/Press

As for me, this much I know: the concert documentary was brilliant, moving, and very honest.  The forty plus people who gathered to watch the biopic in Albuquerque, New Mexico (incidentally, Cave sang his song “Albuquerque” in the show) sat in silence until the final credit rolled away.  I even heard sighs and tears. I looked over at my wife and said, “Profound. It’s as if I went to church.” Later, my wife noted that Cave offers spiritual direction to many. She knows this because she’s recently trained as a Christian spiritual director.  Cave has learned the art of listening.

One of the poignant moments in the documentary is when Maryanne Faithful reads a poem—prayer that is integrated into the music, looped as a voice throughout the song.   Prayer seems to be a part of Cave’s life, even taking a moment at one point to gather himself in a prayer like moment of silence. One can  guess the profound prayer will make it to Cave’s forthcoming work, an album of Psalms and music, Seven Psalms, to be released in June 2022.  We can only hope.

But in a way This Much I Know To Be True was a prayer, a Psalm of discovery, a petition for personal peace.